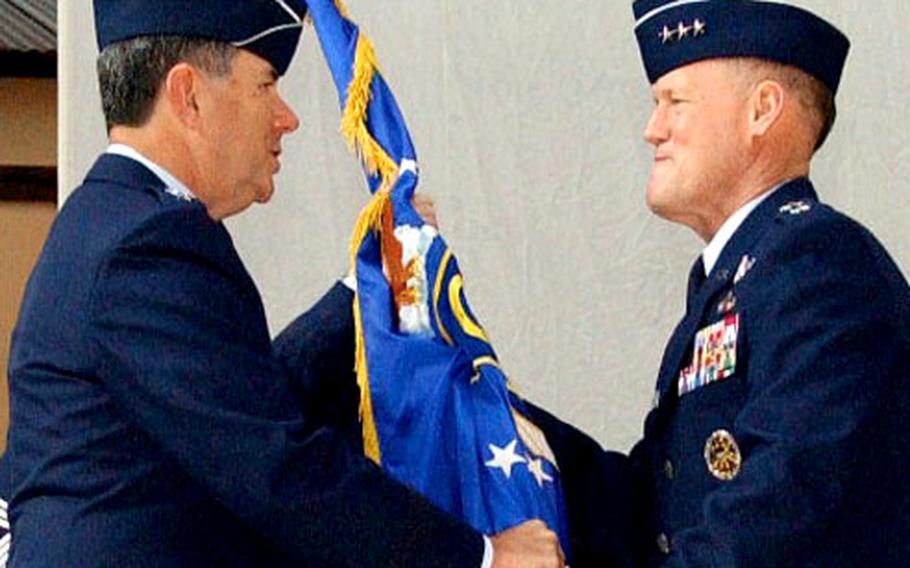 Adm. Thomas Fargo, U.S. Forces Pacific commander, and Gen. Paul Hester, Pacific Air Forces commander, presided over the ceremony on a stage in front of huge Japanese and American flags with hundreds of community members and visitors packed onto bleachers.

Fargo stressed the command&#8217;s importance, telling attendees that &#8220;joint actions between the U.S. and our friends&#8221; have helped deter regional conflicts, reinforced safe and secure trade routes and, equally important, have together promoted democracy, respect for human rights and freedom everywhere.

Fargo called Waskow, who is retiring, one of the military&#8217;s most visible representatives in the relationship &#8212; &#8220;a staunch advocate for the strength of our alliance&#8221; who has been instrumental to the cooperation and coordination the countries enjoy.

Waskow credited the men and women who make up the joint commands, thanking them for looking &#8220;magnificent in formation&#8221; and for joining the ceremony &#8220;for this old fighter pilot.&#8221;

He said he was honored to command the soldiers, sailors, airmen and Marines in Japan and called them, the Department of Defense civilians and family members &#8220;our nation&#8217;s finest treasure.&#8221;

Waskow also offered a special tribute to his wife, calling her his best friend, most trusted adviser and greatest asset.

&#8220;Sweetheart, your passion for the family members of our military and civilian professionals here in Japan is the stuff of legends,&#8221; he said.

Hester called the Waskows the epitome of &#8220;hospitality and grace in command,&#8221; and thanked them for strengthening the command and the Japan-U.S. alliance.

After accepting the command colors, Wright thanked the people who put in the behind-the-scenes work to make the hourlong ceremony successful. It was &#8220;a lot of work, it&#8217;s well done,&#8221; he said.

Wright, who&#8217;s had three previous assignments in Japan, called his move to Yokota &#8220;more like a homecoming than an overseas assignment.&#8221;

Wright&#8217;s message to USFJ is that the &#8220;mission remains the same,&#8221; and that supporting the continued stability of Asia and the Pacific remains a top priority.

&#8220;Joint and coalition combat readiness and unwavering commitment to the highest levels of professionalism will always be the foundation for what we do and who we are,&#8221; he said.

During his speech, Fargo left Wright with a Theodore Roosevelt quote: &#8220;The best [leader] is the one who has sense enough to pick good men to do what he wants done, and self-restraint to keep from meddling with them while they do it.&#8221;