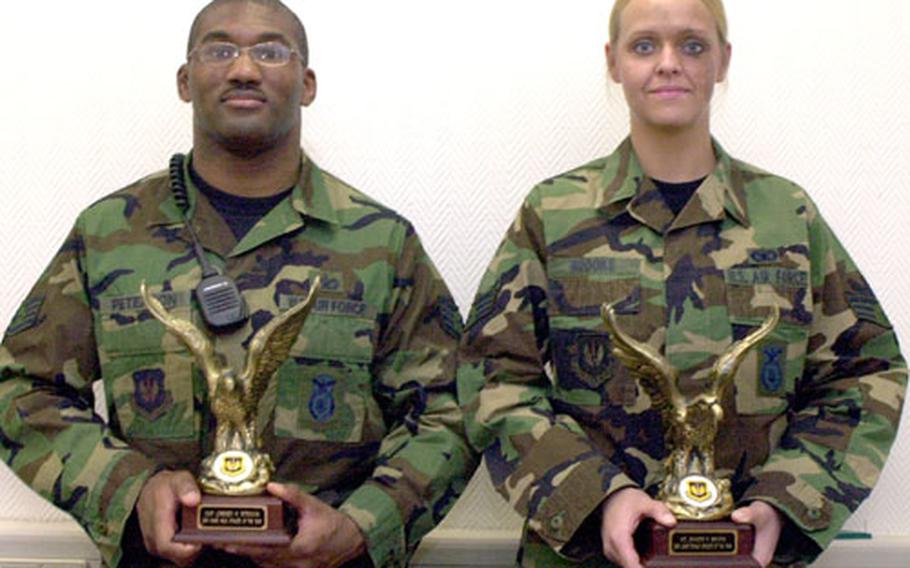 RAMSTEIN AIR BASE, Germany &#8212; The commander and vice commander of U.S. Air Forces in Europe are protected by a pair of guards who are among the service&#8217;s best athletes.

Two elite guards from Ramstein are USAFE&#8217;s male and female athletes of the year.

Both serve as security personnel protecting USAFE&#8217;s top two officers. The pair received their awards during a commander&#8217;s call Wednesday at Ramstein.

Peterson, who re-enlisted on Wednesday after six years of service, said winning the award was one of the reasons he is staying in the military.

Peterson, 24, of Raleigh, N.C., coaches wrestling and has placed in numerous tournaments the last two years. Last October, he finished first in the 220-pound weight division of the Powerlifting Invitational in Heidelberg.

Brooks, 25, of Waxahachie, Texas, has played basketball since she was 12. Last year, she averaged 17 points and 15 rebounds per game for Ramstein&#8217;s women&#8217;s varsity basketball team during a two-game stretch.

Both said the Elite Guard and the 435th Security Forces Squadron were very supportive of their athletic endeavors, more so than many other commands in the Air Force.