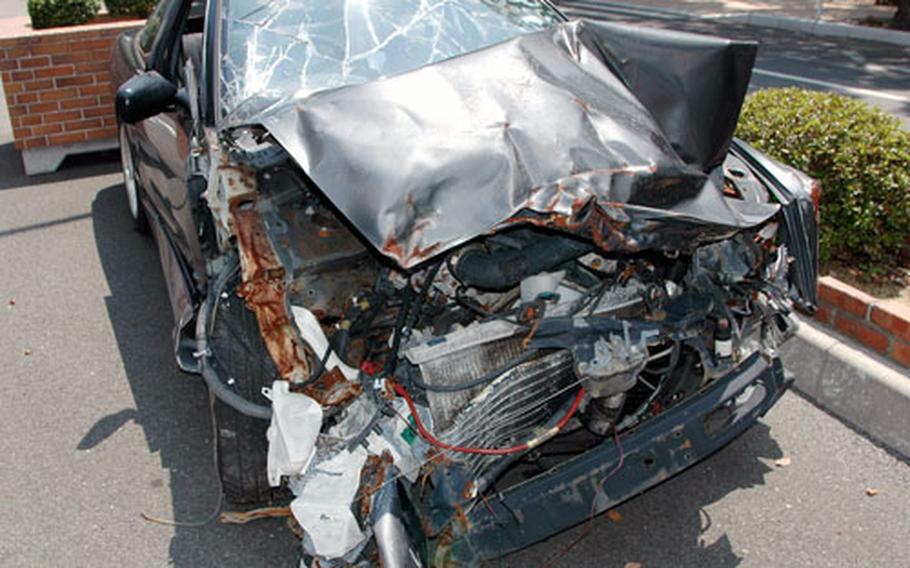 A Japanese-built compact sits at the main gate of Sasebo Naval Base, Japan. Officials plan to leave the twisted mass of metal, glass and hard plastic on display for several weeks in hopes it reminds or re-educates drivers about the importance of safe driving. (Greg Tyler / S&S)

SASEBO NAVAL BASE, Japan &#8212; As personnel drove to work through the main gate Friday morning, it was impossible to overlook the black compact car with a smashed front end.

The mangled mess was placed near the front gate intentionally as a visual reminder of what can happen when people combine alcohol and driving, said Lt. j.g. Alphonse Navarro, Sasebo&#8217;s security officer.

&#8220;That automobile is seen every time you drive onto the base. So, it helps us educate or reiterate to our personnel that drinking and driving do not mix,&#8221; said Lt. Cmdr. Michael Little, acting Sasebo chief staff officer.

Base officials said they plan to leave the twisted mass of metal, glass and hard plastic on display until sometime later this summer.

Little said base skipper Capt. Tilghman Payne; Morale, Welfare and Safety Director Scott Poluhowich; Safety Officer Director Jim Whalen; and Navarro put their heads together to create a symbol to help keep driving safety a priority in the base community.

The junked car was sitting in a Defense Reutilization and Marketing Office holding area, slowly rusting and continuing to fall apart. Officials say they don&#8217;t know the story behind the car.

&#8220;From the command outlook, this symbol &#8230; this wreck sitting out in front, is much more than a statement about not drinking and driving,&#8221; Little said. &#8220;It&#8217;s also a statement that reminds drivers to pay attention. That means keeping music from being too loud while driving, or trying to use your cell phone, or daydreaming, anything like that.&#8221;

Whalen said recently there&#8217;s no excuse for anybody who gets behind a steering wheel if they&#8217;ve been drinking. The Safety Office, Chief Petty Officers Association, local bar owners and others have created programs with agreements to guarantee taxi fares so sailors and others can return to the base safely.