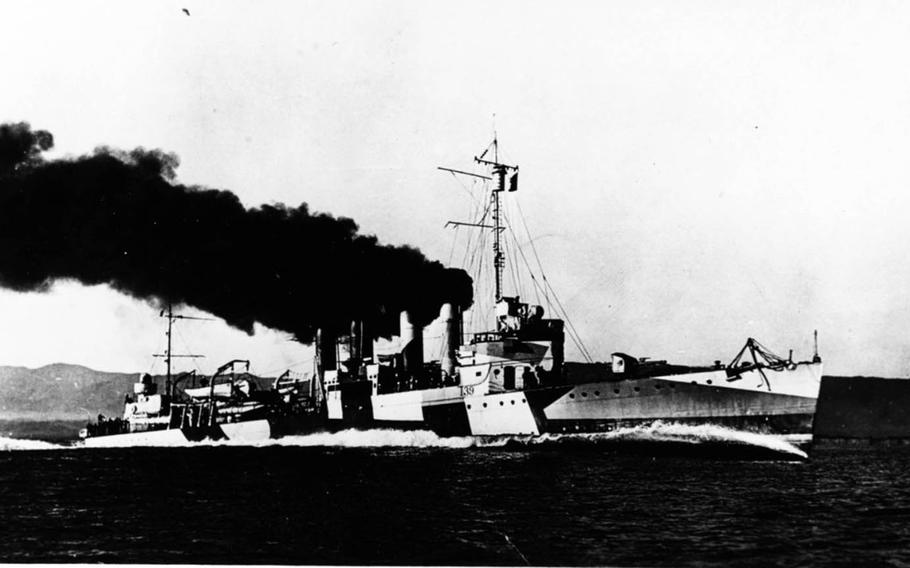 The USS Ward runs speed trials off the California coast in September 1918. (Courtesy of the U.S. Navy)

The USS Ward runs speed trials off the California coast in September 1918. (Courtesy of the U.S. Navy) 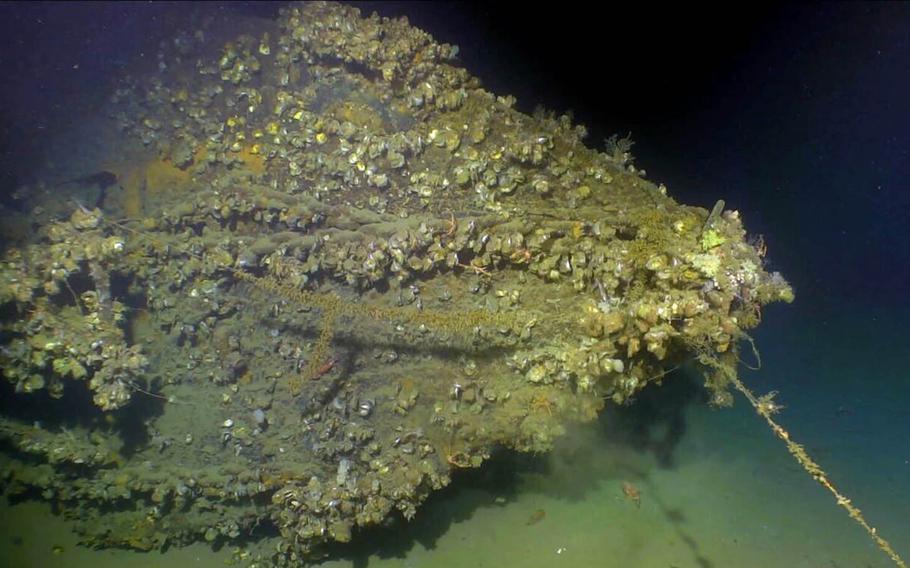 The bow of the USS Ward, which was sunk during World War II off Leyte, Philippines, is seen on Nov. 30, 2017. (Courtesy of Paul Allen) 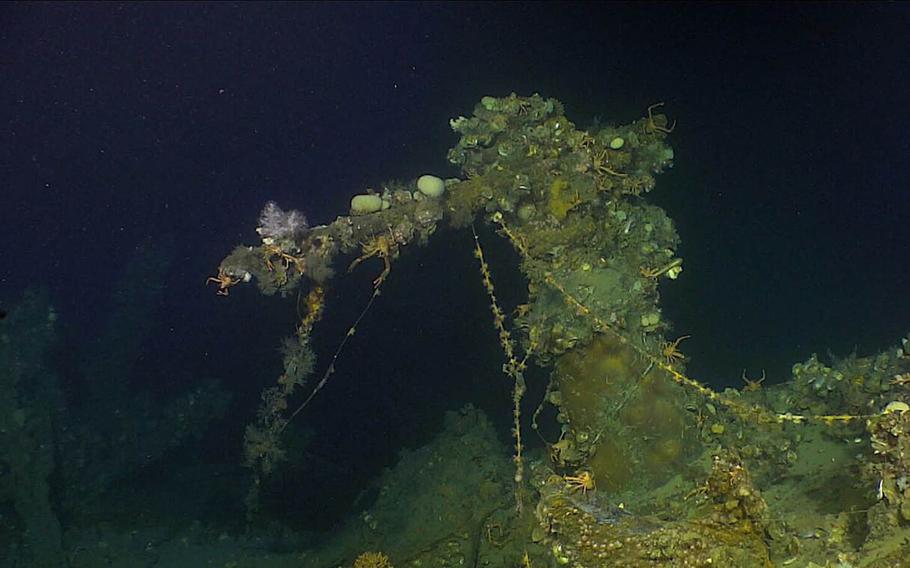 A machine gun on the USS Ward, which was sunk during World War II off Leyte, Philippines, is seen on Nov. 30, 2017. (Courtesy of Paul Allen) 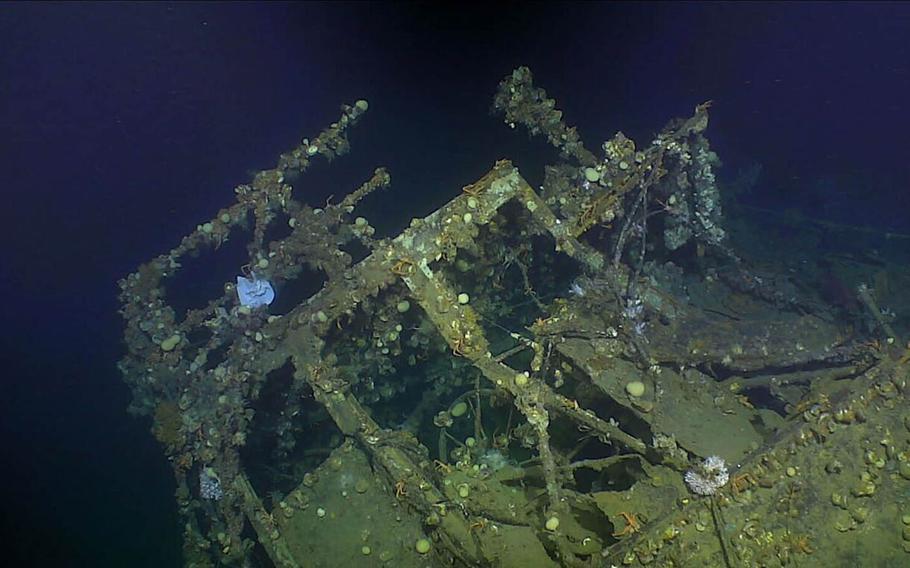 The wheelhouse of the USS Ward, which was sunk during World War II off Leyte, Philippines, is seen on Nov. 30, 2017. (Courtesy of Paul Allen)

FORT SHAFTER, Hawaii — Just days before the 76th anniversary of the surprise attack on Pearl Harbor, marine researchers have found and explored the undersea wreckage of the U.S. ship that was the first to fire upon a Japanese vessel that day.

On Dec. 1, the crew of the research vessel Petrel sent an underwater drone 650 feet below to explore and document the remnants of the USS Ward, according to a statement by the USS Ward Expedition.

The Ward has rested unseen at the bottom of Ormoc Bay — just off the island of Leyte, Philippines — since it was destroyed by kamikaze planes in 1944. It was the end of the line for a ship that played a historic role in the beginning of World War II.

During the early morning hours of Dec. 7, 1941, the Wickes-class destroyer was patrolling the entrance to Pearl Harbor. Just after 6:30 a.m., the officer of the deck spotted the periscope of a Japanese 80-foot midget submarine trailing the cargo ship USS Antares into the harbor, which was home to the Pacific Fleet.

The Ward fired on the sub and dropped several depth charges.

“We have attacked, fired upon and dropped depth charges on a submarine operating in defensive sea areas,” the Ward’s commander radioed a few minutes after the sub rolled over.

The submarine was sunk almost two hours before the first wave of Japanese fighters and bombers attacked the island of Oahu and decimated the Pacific Fleet’s Battleship Row.

The Ward’s shots are regarded as the first fired by America during World War II, even though the United States did not officially declare war on Japan until the next day.

Three years to the day, on Dec. 7, 1944, the Ward was attacked near Leyte by several Japanese kamikazes – suicide aircraft loaded with explosives. One slammed into the ship’s hull, igniting a fire that could not be contained. The crew was ordered to abandon ship, and the Ward was intentionally sunk by a fellow Navy ship.

“The USS Ward found herself in the crucible of American history at the intersection of a peacetime Navy and war footing,” Adm. Scott Swift, Pacific Fleet commander, said in a statement issued by the expedition’s organizers. “She took decisive, effective and unflinching action despite the uncertain waters. Now 76 years on, her example informs our naval posture.”

The Petrel is owned by Microsoft co-founder Paul Allen. The 250-foot ship is one of the few capable of exploring waters as deep as 3.5 miles.

The Petrel began its five-day expedition in the Philippines on Nov. 28, first surveying five Japanese destroyers sunk during World War II’s Battle of Surigao Strait, the statement said. The research vessel then surveyed the Ward on Dec. 1 before returning to port in Surigao City on Saturday.

Searchers verified the wreckage by cross-referencing historic drawings and schematics of the Ward.

Allen has also spearheaded expeditions that discovered the wrecks of the USS Indianapolis in August and the Japanese battleship Musashi in 2015.