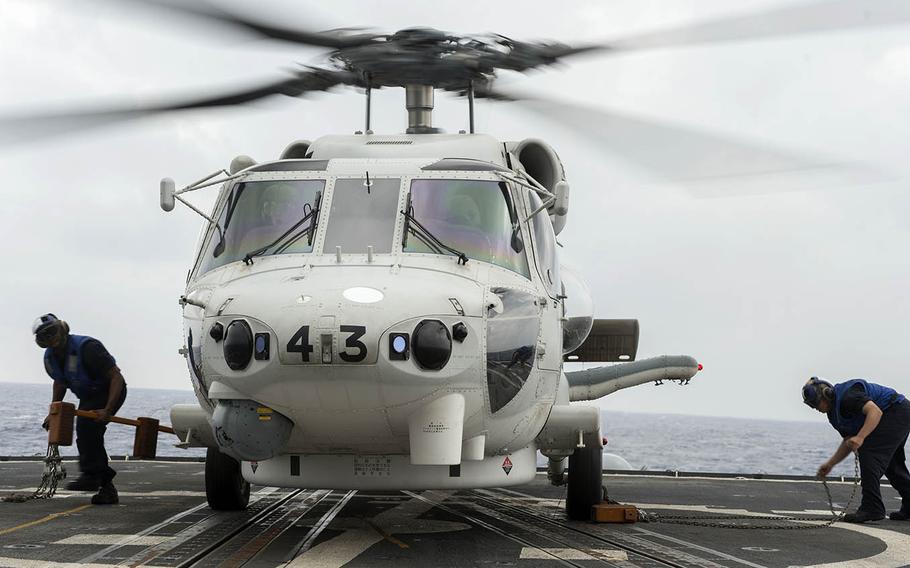 CAMP FOSTER, Okinawa — A Japanese military helicopter that crashed on Aug. 26 – presumably killing three aviators – has been found at the bottom of the Sea of Japan, about 50 miles off the coast of Tappizaki in Aomori prefecture.

The Oct. 16 discovery of the Japan Maritime Self-Defense Force SH-60J Seahawk was announced Tuesday at a press conference at Japan’s Ministry of Defense in Tokyo.

The wreckage was found in 8,530 feet of water by a private company using an unmanned underwater vehicle equipped with cameras, a JMSDF spokesman said Wednesday.

The aircraft, which took off from the Asagiri-class destroyer Setogiri, was conducting nighttime take-off and landing drills at the time of the crash.

JMSDF officials said they plan to retrieve the aircraft “soon,” though they would not provide specifics. They also declined to comment as to whether the remains of the three missing crewmembers are still inside the helicopter.

The Japan Air Self-Defense Force is also searching for four crew members missing after a UH-60J helicopter crashed at sea during training on Oct. 17 about 20 miles south of Hamamatsu Air Base in Shizuoka Prefecture, a JASDF spokesman said Wednesday. A life raft, helmets and a boot were found among other debris.

Stars and Stripes reporter Ken Kuniyoshi contributed to this report.