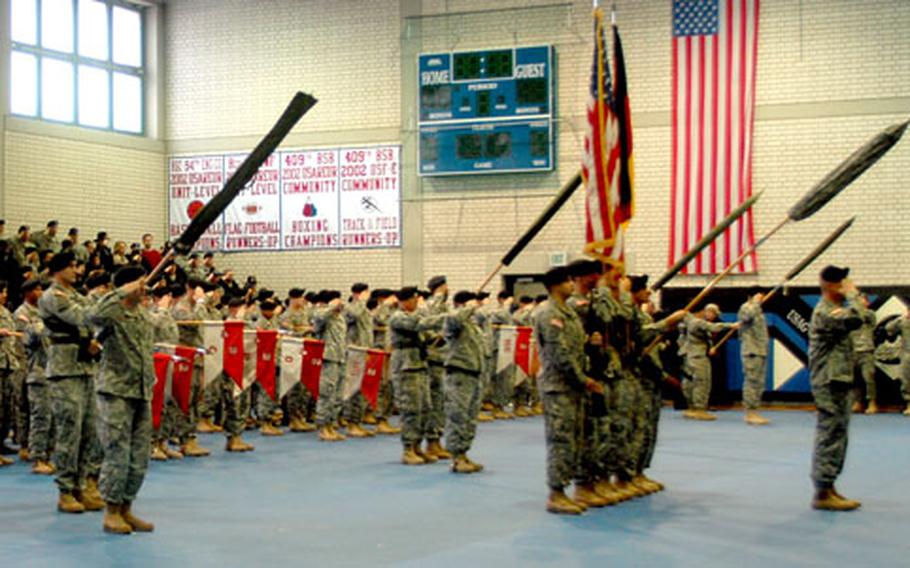 Dragoons stand ready to uncase the colors during a ceremony to welcome home members of the 2nd Stryker Cavalry Regiment at Vilseck on Tuesday. (Seth Robson / S&S)

Some were on crutches, one was in a wheelchair and others had less visible injuries. All were given loud cheers and applause as they helped leaders uncase the colors in front of a packed crowd inside the Memorial Fitness Center.

Second Cav commander Col. John RisCassi told his men their service during 15 months in Iraq was nothing short of remarkable.

"The regiment&#8217;s name became synonymous with success across the entire Baghdad operating environment," he said, adding that the Dragoons went on to patrol a portion of Diyala province larger than Kuwait.

The Strykers were involved in many facets of warfare, from combat to shaking hands and distributing supplies, he said.

The mission was "a triumph that each of you can be justly proud of," he said.

The regiment destroyed al-Qaida&#8217;s last bastion in Baghdad, put down an uprising in Sadr City, disrupted a suicide bomber network in Diyala and recovered the remains of Staff Sgt. Matt Maupin, a fallen comrade, RisCassi said.

V Corps commander Lt. Gen. Kenneth Hunzeker told the troops, "No other unit of this size has deployed with as little notice, to as complex an environment, with as many types of mission as the Dragoons. It is appreciated."

The regiment left Iraq in a better situation than it was in when it deployed, he said.

"You took the fight to the enemy&#8217;s doorstep and it was your perseverance that reassured a once-oppressed Iraqi populace that better days were ahead," he said.

The Strykers cleared thousands of miles of road, found hundreds of improvised bombs and eliminated an insurgency, Hunzeker said.