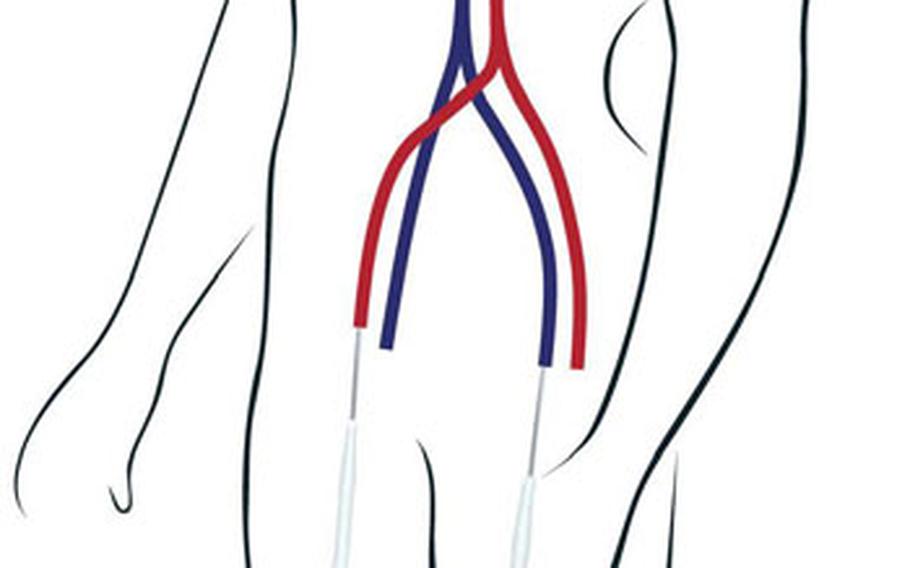 The Novalung ILA aids the lungs by drawing off carbon dioxide from the blood and infusing cells with oxygen. Inserted by catheters into the major arteries in the thighs, it relies on the patient’s heartbeat to pump blood out of one leg, across the special membrane that performs the transfer and back into the body through the other leg. (Courtesy of Novalung)

The Novalung ILA aids the lungs by drawing off carbon dioxide from the blood and infusing cells with oxygen. Inserted by catheters into the major arteries in the thighs, it relies on the patient’s heartbeat to pump blood out of one leg, across the special membrane that performs the transfer and back into the body through the other leg. (Courtesy of Novalung) 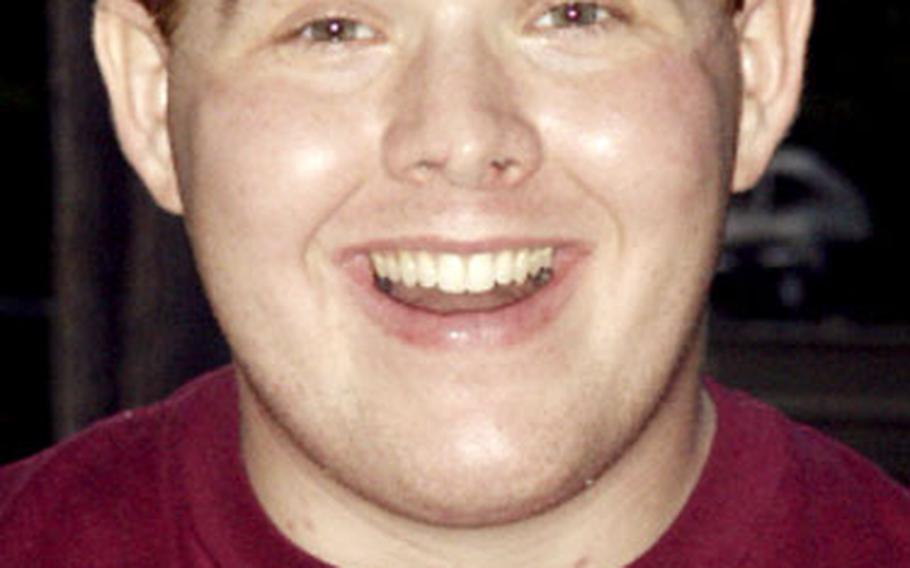 Sixteen months after Lance Cpl. Joshua Mishoe nearly drowned in his Humvee in a canal in Iraq, he&#8217;s finally starting to breathe better.

He can walk short distances around his Florida home without getting out of breath and no longer needs supplemental oxygen at night, his mother said.

Improvement is slow, but it&#8217;s a far cry from where he was last March when he was lying in Landstuhl Regional Medical Center in Germany, his lungs steadily failing him, his chances of survival getting worse.

To save his life, military doctors looked outside their normal arsenal of medical tools and found something that would not only keep Joshua Mishoe alive, but within two months would help revive three other servicemembers.

Called an interventional lung assist and made by a German company called Novalung, the device is now part of the inventory a special Air Force pulmonary emergency team takes to Iraq when critical lung patients need aid.

But using it also placed doctors in the cross hairs of an investigation by the Office of the Surgeon General of the Army because the Novalung machine hadn&#8217;t made its way through the lengthy American regulations process required to approve medical devices for use.

And it led to the Army medical agency reprimanding at least one of the doctors for his actions, even as the families of the injured praised the doctors for taking bold steps to save their sons.

Research put to use

The events that led to the Nova-lung&#8217;s use by American doctors (it had been used with success in Germany on numerous occasions by 2005) began when Army Reserve doctor Bedford Boylston was mobilized to Landstuhl last spring.

A cardiothoracic surgeon from Ashland, Ky., Boylston had years before researched a medical technology called extra-corporeal (out of body) lung assistance, designed to keep patients with severely reduced lung function alive. Indeed, he had even tried to get the military to pursue it as a treatment, but had met with no success, he said.

Still, when Mishoe came to the hospital dying of lung and other problems, Boylston said he thought of it as one of the only options to save the man, and suggested a brand that he knew &#8212; the Novalung ILA. A simple-looking, slender box with a complex membrane inside, the Novalung ILA aids the lungs by drawing off carbon dioxide from the blood and infusing cells with oxygen.

Inserted by catheters into the major arteries in the thighs, it relies on the patient&#8217;s heartbeat to pump blood out of one leg, across the special membrane that performs the transfer and back into the body through the other leg.

Inserted into Mishoe by German doctors from Mainz who were brought in by Landstuhl to assist, the combination of the Novalung and an advanced ventilator kept him alive until his lungs regained strength, Julie Mishoe said.

After living through a 17-day coma and several weeks of care after doctors had all but declared him dead, Mishoe was awake and talking, Boylston said.

The success would prove to be a catalyst. Word of Mishoe&#8217;s recovery spread to doctors in Iraq, and just weeks after the Marine came in, Boylston got a call to help another patient with critically damaged lungs.

This time, a Marine wounded in an improvised bomb attack was lying in a Baghdad hospital, unable to be flown to Germany because of his respiratory condition, Boylston said. Doctors there began asking for the Novalung ILA.

Landstuhl responded, and a medical team including Boylston and a German doctor was assembled, but the mission ran into a problem: Administrative restrictions prevented the German doctor from going to Iraq, Boylston said.

Boylston knew that using the device himself could run him afoul of military medical commanders, because it was not an established part of the U.S. lifesaving inventory.

But it appeared to be one of the few options left for the injured man, Sgt. Shurvon Phillip. So the American team took the Nova- lung device to Iraq &#8212; with clearance from the Army hospital, Boylston said &#8212; and a day after arriving in Iraq they hooked Phillip up to it.

Phillip&#8217;s blood-oxygen levels soon improved, and several days later he was evacuated to Landstuhl, where he began his recovery.

But calls for the device didn&#8217;t stop there. About a week after returning from the trip to help Phillip, Boylston got a second request for the Novalung ILA, again for a soldier wounded in a roadside bomb blast and unable to fly to Landstuhl.

Once again Boylston and a medical team flew to Iraq, where they used the Novalung on Army Sgt. Chang Wong, who had suffered severe injuries to his lungs and lower legs. With the Novalung plugged into his thighs, Wong was flown to a German hospital in Regensburg, where he, too, recovered.

So in a period of about two months, doctors had used the Novalung device with success on three American patients.

No medals, just an investigation

But, as Boylston feared, the scrutiny for using the unapproved device wasn&#8217;t far behind.

Not long after Wong began breathing on his own again, the Army surgeon general&#8217;s office opened an investigation into doctors&#8217; actions at Landstuhl and Iraq to see if doctors had deviated from military medical regulations by using the device.

Although the agency won&#8217;t comment on the auspices or outcome of the investigation, Boylston said one upshot of the inquiry was a letter of reproach he received warning him not to take such action in the future, should the opportunity arise.

The experience left a bitter taste in his mouth.

He was sent to Iraq with clearance to use the Novalung to save men if he needed to, he said, received nonspecific, open-ended orders to do so &#8212; and was then investigated for doing just that.

But Novalung&#8217;s success on the patients in the spring of 2005 did open doors. Since last May, it has also been applied to two more men, one who survived, the other who died of his injuries, according to a spokeswoman from the Army surgeon general&#8217;s office. It has also been added to some Critical Care Air Transport flights from Ramstein, Germany, to Iraq.

Currently, the Novalung ILA is listed as a &#8220;Class III &#8211; Premarket Approval&#8221; device by the Food and Drug Administration, the category with the most stringent approval requirements, according to the FDA&#8217;s Web database.

&#8220;When an Army doctor wants to use the NovaLung on an emergency basis, we ask the manufacturer, NovaLung U.S., to notify the FDA of the device&#8217;s use under the FDA NovaLung Investigational Device Exemption requirements,&#8221; wrote Cynthia Vaughn, a spokeswoman for the Army surgeon general&#8217;s office, in an e-mail to Stars and Stripes.

But despite any after-the-fact scrutiny or investigations made into medical staff over use of the device last spring, doctors said they were simply doing what they could do to save wounded servicemembers. &#8220;We tried to do what we would want someone to do if it was our own son, daughter, or spouse; each and every life was precious,&#8221; Col. Rhonda Cornum, commander of Landstuhl at the time Mishoe, Phillip and Wong were hurt, wrote in an e-mail to Stars and Stripes.

Doctors did &#8212; and continue to do &#8212; everything they can to save injured servicemembers, said Col. Mark Ivey, a pulmonary critical care specialist who assisted Boylston with both Phillip and Wong. &#8220;We can and will do whatever it takes to return [servicemembers] home in as good of shape as possible,&#8221; Ivey said.

And though her son has no recollection of being attached to the Novalung ILA, Julie Mishoe said she knows it helped save his life, and was glad that its success with Joshua may have helped make it available to other servicemembers. &#8220;It&#8217;s just wonderful to know that machine has been used to save other people&#8217;s lives,&#8221; she said.