Wounded soldiers talk about their close calls in Iraq 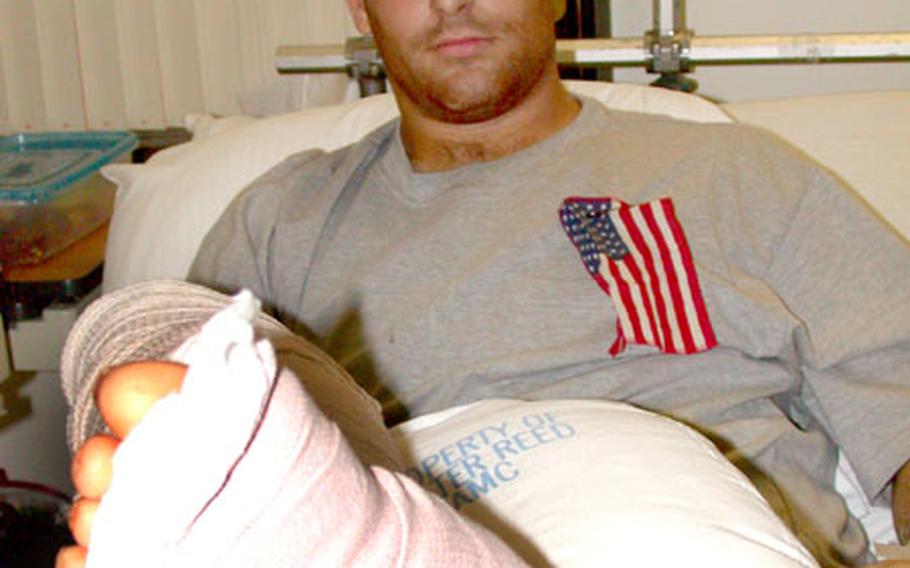 Army Sgt. Eric Torres, 23, was shot in the right leg when his convoy was ambushed March 23 near As-Samawa, Iraq. (Sandra Jontz / S&S)

Army Sgt. Eric Torres, 23, was shot in the right leg when his convoy was ambushed March 23 near As-Samawa, Iraq. (Sandra Jontz / S&S) 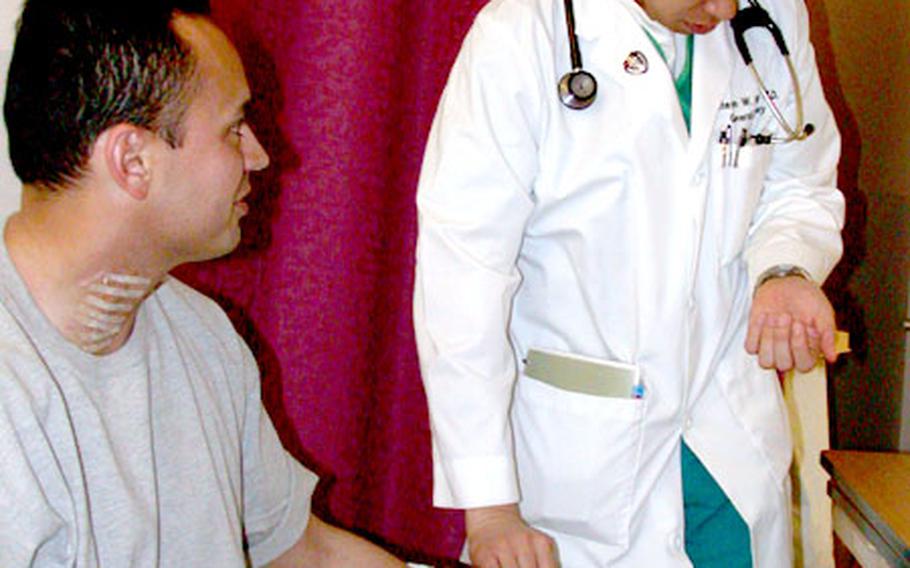 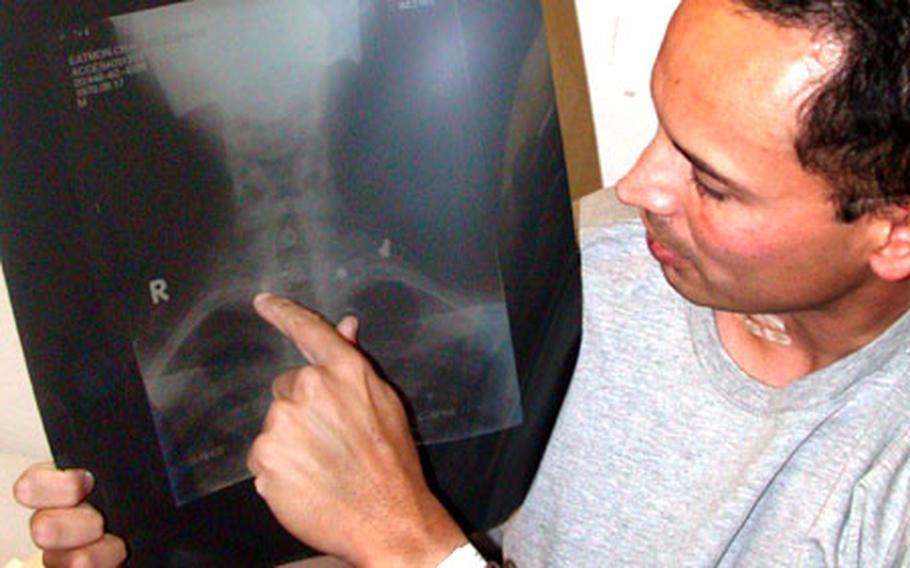 Sgt. Charles Eatmon points out on an X-ray where bullet fragments remain lodged in his neck and shoulder. (Sandra Jontz / S&S)

WASHINGTON &#8212; Sgt. Charles Eatmon had made up his mind.

That wound, that bullet &#8212; likely from an AK-47 rifle, he said &#8212; nearly cost him his life. The bullet entered his right shoulder and exited from his neck, collapsing his right lung.

Good luck, training and a will to survive helped Eatmon, 30, keep that promise to himself.

He and another soldier, Sgt. Eric Torres, spoke with Stars and Stripes on Monday while recuperating at Walter Reed Army Medical Center in Washington, D.C.

It was sunset, and his world was orange from sunlight hitting the sandstorm blowing through.

Assigned to 2nd Battalion, 69th Armor Regiment out of Fort Benning, Ga., Eatmon had orders to have his unit relieve U.S. Army scouts who had been securing a bridge.

&#8220;We got reports of Iraqi soldiers, five men with RPGs [rocket-propelled grenades], moving around to get to the rear of our Bradlees.&#8221;

Suddenly there was barrage of fire, pinning Eatmon and other troops against a 5-foot-high wall.

He turned. He got shot. He felt his chest getting soaked, and at first figured his Camelbak water container had been hit.

Then he saw blood.

He stood up, fell back and blacked out.

Eatmon has undergone surgery to repair the damage, but some pieces of the fragmented bullet remain in his neck and above his left collarbone. Surgeons have not decided if it&#8217;s worth the risk to his health to remove them, he said.

Morale was low. They&#8217;d been sitting for weeks in Kuwait, ready for action, for home, for someone to make a decision.

Then the orders came. When they reached Nasiriyah, he said he realized why they were sent in.

The night was quiet.

Enemy fire changed all that March 23 as Torres&#8217; convoy of about 15 vehicles were ambushed near Samawah.

&#8220;We were coming up to an Iraqi military checkpoint that we thought had been abandoned,&#8221; Torres said.

Torres, assigned to 1st Battalion, 41st Field Artillery Regiment, Headquarters Battery out of Fort Stewart, Ga., suffered a broken tibia and fibula, the bones in the lower part of his right leg. He&#8217;s recuperating from a &#8220;fist-sized&#8221; hole.

&#8220;The Army called to say [her son&#8217;s] vehicle had been ambushed, and he suffered gunshot wounds in both legs. I remember fear. Lots of fear,&#8221; said Solgard, who traveled to Washington to be with her son. Reports were later corrected; he&#8217;d been shot in one leg.

Solgard and her husband, Norm, Torres&#8217; stepfather, took turns being the rock in the family, Norm Solgard said.