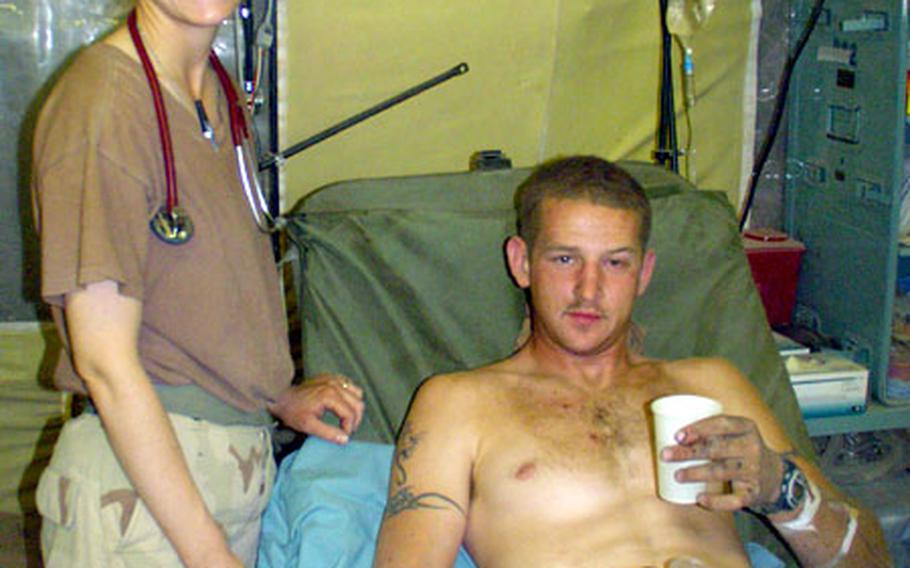 WITH THE 212TH MOBILE ARMY SURGICAL HOSPITAL, Central Iraq &#8212; In a fit of post-Sept. 11 patriotism and rage, New Yorker Robert Schiria and his fraternity brother, Jacob Pfister, quit college and joined the Army.

The two Buffalo State University freshmen boiled with anger as they watched the Twin Towers of the World Trade Center fall at the other end of their state, and saw anxious friends call family members in Manhattan to make sure they were safe.

Nineteen months later, Pfc. Schiria sat up in bed in the intensive-care unit of the 212th Mobile Army Surgical Hospital, wounded in the war spawned by the events that enraged him. He said he would do it all over again in a heartbeat &#8212; even with the injured legs and back that will earn him a Purple Heart.

Schiria drives a Bradley fighting vehicle for the 3rd Battalion, 7th Infantry Regiment from Fort Stewart, Ga. His 10-man crew had been charging forward for almost three weeks, never stopping to sleep more than four hours at a stretch.

About noon Sunday, he sat in the top of his Bradley and drove down a narrow road on the edge of Baghdad. They were clearing routes into the capital so Iraqi army reinforcements couldn&#8217;t use them.

Schiria watched through his scope as a blue civilian truck, open in the back, drove up. It stopped suddenly and an Iraqi got out and fired a rocket-propelled grenade at him. He saw the flash, just before the metal hatch where he was sitting exploded in a shower of burning metal.

&#8220;I was brushing off all the fire and melting stuff,&#8221; Schiria recalled three hours later, wadding his brown Army T-shirt into a pillow with hands still grimy from the field. &#8220;I couldn&#8217;t talk or breathe. The concussion of the grenade takes all the air.&#8221;

Despite the danger, he followed his training and kept driving around a curve before stopping. A Bradley driver is responsible for his crew, and Schiria didn&#8217;t want to leave his men parked in an ambush.

Once stopped, his soldiers got out and formed a security detail. They called medics, who treated him, washing debris out of his eyes and picking metal out of his skin. After the medics found bits of shrapnel in his back, they decided to airlift him to the 212th MASH.

Pfc. Dave Jotich, 19, of Stow, Ohio, is a mortarman with the 3rd Infantry Division&#8217;s 1st Battalion, 15th Infantry Regiment. Armored trucks in his unit had been parked at the key crossroads of highways 1 and 8 south of Baghdad for several days, firing mortars at distant targets when needed.

About an hour before dark Saturday, Jotich and his friend were walking along the pavement, looking at a bunker that Iraqi troops had left behind. There had been little hostile fire and no mines discovered around the intersection since the soldiers had arrived earlier in the week. Still, they were cautious.

They saw nothing on the ground and never left the concrete, but suddenly an explosion ripped the air near his friend&#8217;s feet.

Jotich suffered shrapnel wounds to the legs, and his friend lost a toe.

Staff Sgt. Glen McCaskill, 33, of Clarksville, Tenn., never knew what hit him, either. A squad leader with the 101st Airborne Division&#8217;s 1st Battalion, 327th Infantry Regiment, he and four other soldiers were patrolling with their Humvee in An Najaf, a friendly city that had seemed to be firmly in American hands for a week.

About 9 p.m. Saturday, they drove down a city street and stopped to inspect a building when an explosion roared up from underneath them.

All five men suffered injuries in the explosion, but only McCaskill and one other soldier went to the MASH for treatment.

This type of scattershot, low-intensity war is frustrating to the soldiers.

Schiria said they see armed enemy in civilian clothes, mixed in public crowds of women and children so they can&#8217;t be shot. This is much different than what they, or the war planners, expected as they began the invasion of Iraq.

Still, Schiria is not ready to go home. Only hours after his injury, all he could think about was getting back to the buddies he had trained with for 10&#189; months. It bothered him to think of them back in Baghdad, guarding the disabled Bradley.