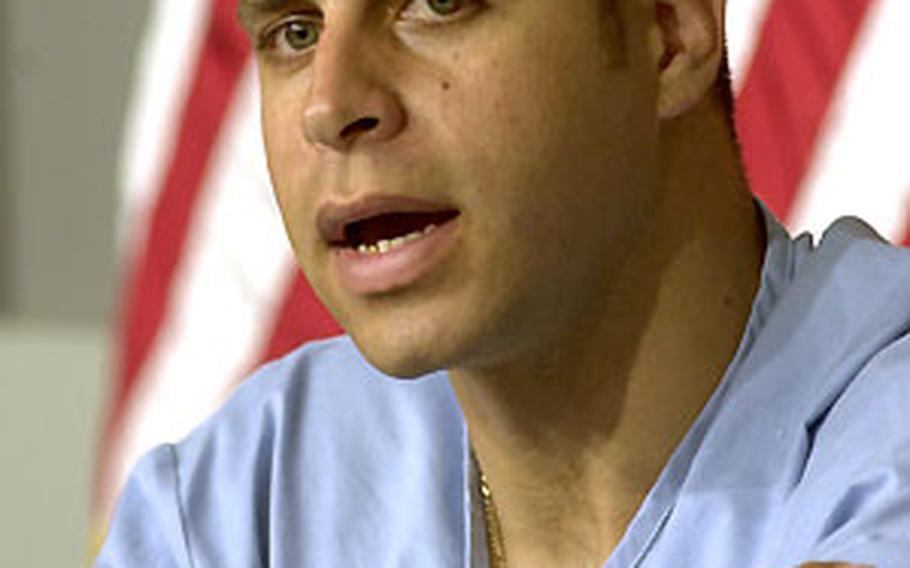 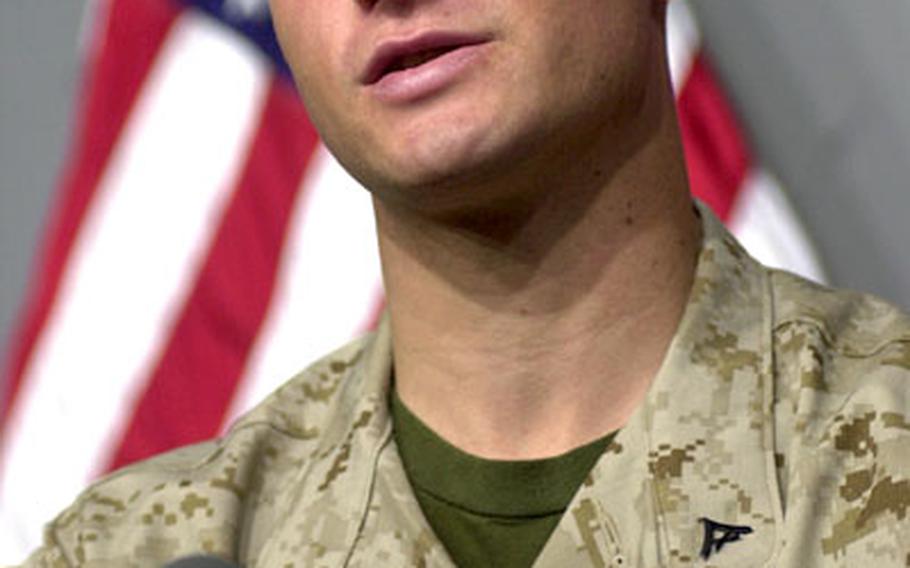 LANDSTUHL, Germany &#8212; Army Staff Sgt. Jamie Villafane discovered the meaning of perfidy on a bridge south of An Nasiriyah, Iraq.

The treachery of Iraqi troops dressed as civilians nearly cost Villafane and his gunner, Sgt. Charles Horgan, their lives.

Villafane, 31, of Long Island, N.Y., doesn&#8217;t remember some of what happened, even though the whole fight on Saturday morning took just 10 minutes.

Villafane and Horgan, of Headquarters and Headquarters Company, 1st Battalion, 30th Infantry Regiment, from Fort Benning, Ga., had been ordered to clear half-dozen &#8220;unruly&#8221; civilians from the bridge over a branch of the Euphrates River.

The Iraqis, wearing black Bedouin robes, were congregating on one bridge, and a few more were on a bridge not far down the river. The Army troops were supposed to secure the bridge and block it, so no one could continue to a nearby airfield.

Horgan, 21, of Helena, Mont., was manning a .50-calibre machine gun in the Humvee&#8217;s turret. Villafane was in the passenger seat.

As the soldiers approached the first bridge, the Iraqi men scattered. Some ran to the team&#8217;s left, and some scurried down an embankment under the bridge.

Villafane and Horgan both heard the rocket-propelled grenade coming. Someone shouted out &#8220;RPG!&#8221; But it was too late.

The RPG apparently had come from the second bridge.

The blast ripped Villafane from the Humvee as well, and somehow he managed to get up and go back for his M-4 rifle. He had just stood back up when he saw a wire-guided rocket whiz in front of his face.

As Villafane started firing at the Iraqis, Horgan, whose legs were numb, tried to crawl toward cover.

Then Villafane went under the bridge.

There, he found one Iraqi civilian cowering near a pillar. When the Iraqi saw Villafane, he dropped his assault rifle and put his hands up. Then, three more Iraqis came around a corner and they surrendered, too.

Later, the men took off their black robes to reveal they were regular Iraqi army troops. One was an officer, based on the stars in his uniform. One was an enlisted man.

Meanwhile, gunfire was still popping around the bridges. Villafane managed to bring the four POWs up onto the road, where they were taken into custody by a crew of a Bradley Fighting Vehicle.

He&#8217;ll carry the scars from the battle of the bridge for a long time. He&#8217;s got pieces of shrapnel lodged in his elbow and had to have a nerve moved from his arm to his hand so he could have feeling around his ring finger.

Both are going next to Walter Reed Army Medical Center in Washington, where they will get extensive physical therapy and, perhaps, more rehabilitative surgery.

The Army soldiers shared the podium with Marine Lance Cpl. Joshua Menard of the 2nd Battalion, 8th Marines, from Camp Lejeune, N.C. Menard got shot in the hand while in a different skirmish near Nasiriyah the day after Villafane and Horgan were wounded.

Villafane, who is married with three children, said the fighting confirmed for him that he means to finish his Army hitch and get out. Although he and Horgan both said they wish they were there to help their fellow troops who helped them, they both have no desire to get in the line of fire again.