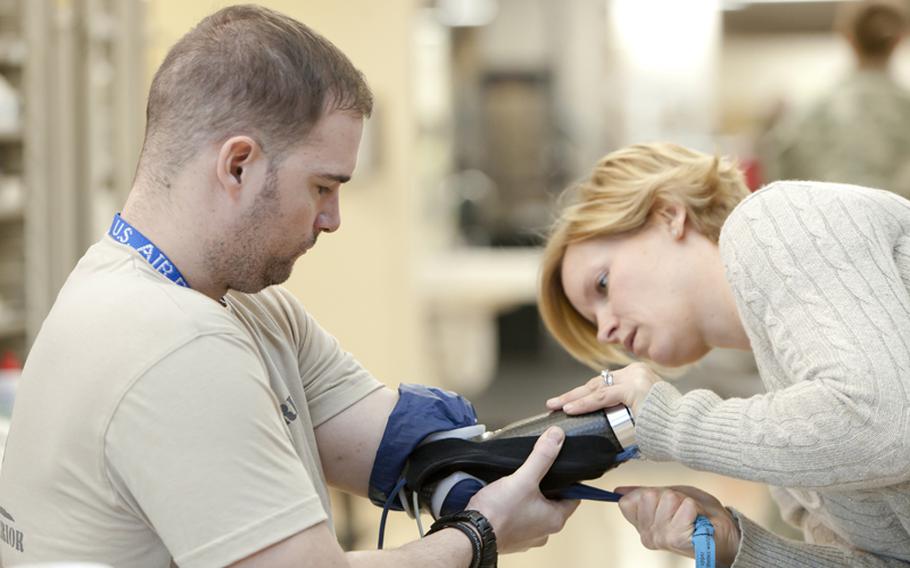 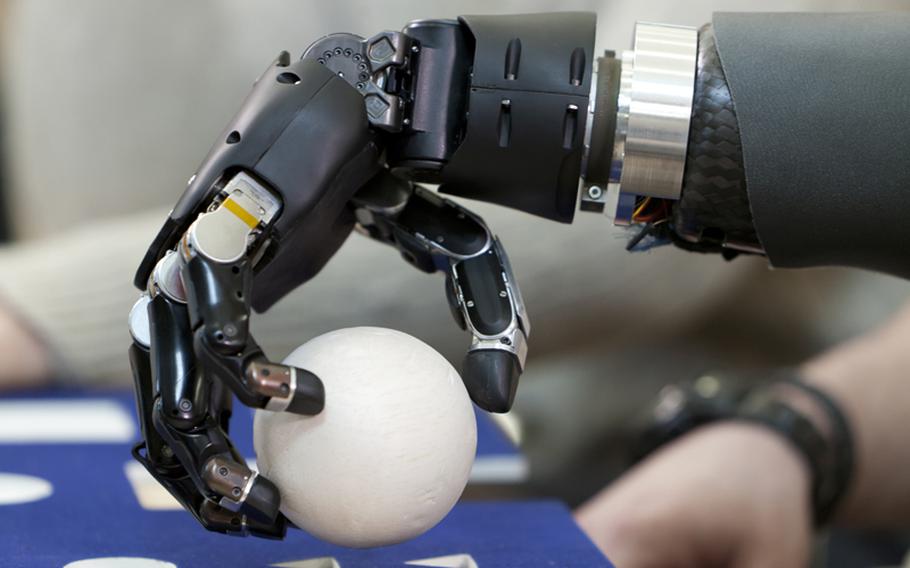 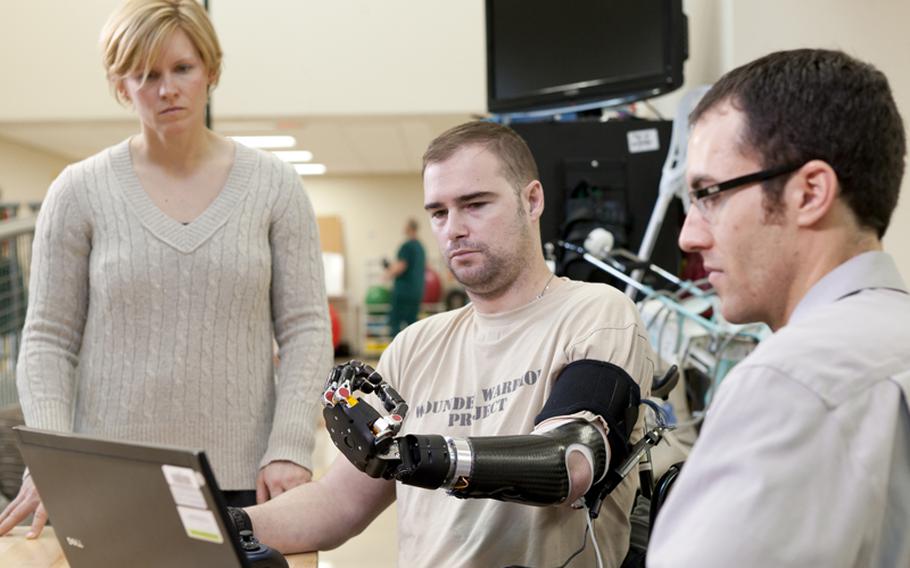 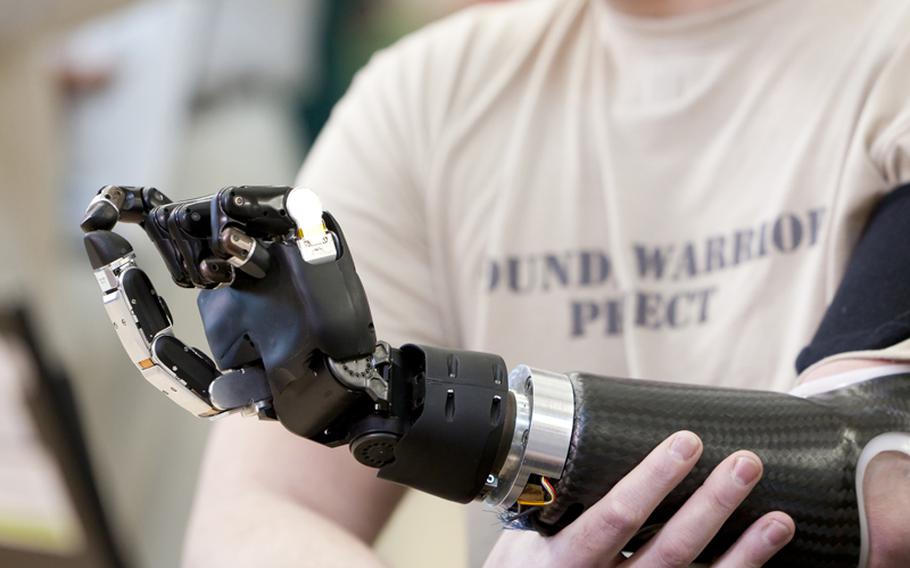 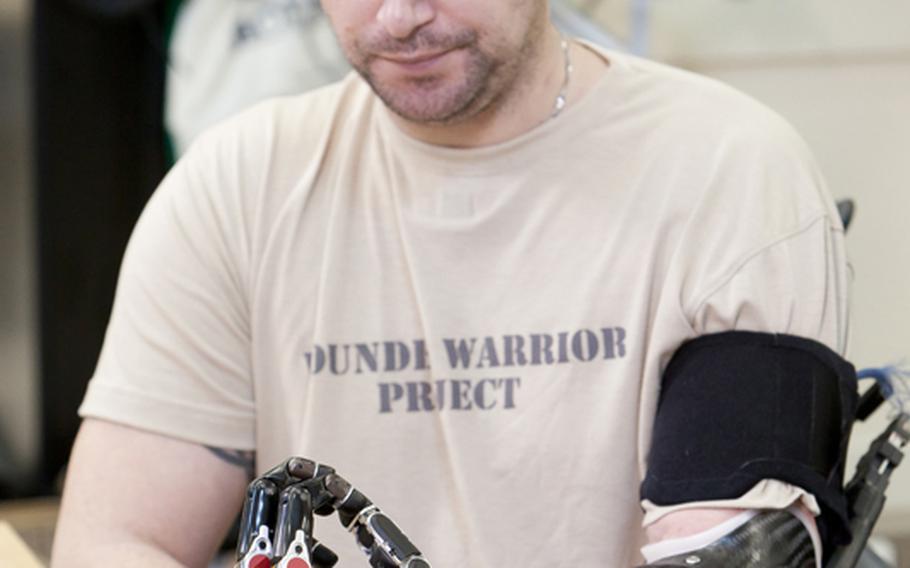 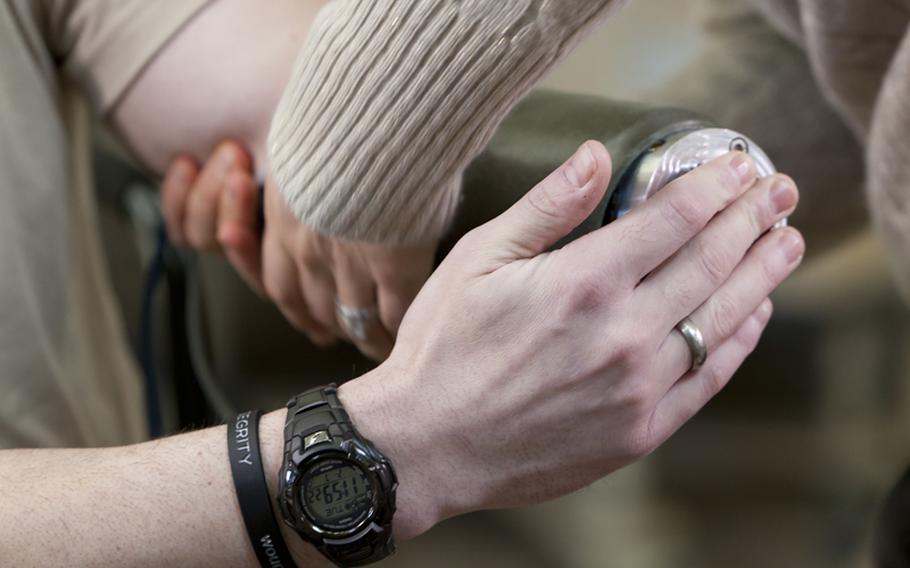 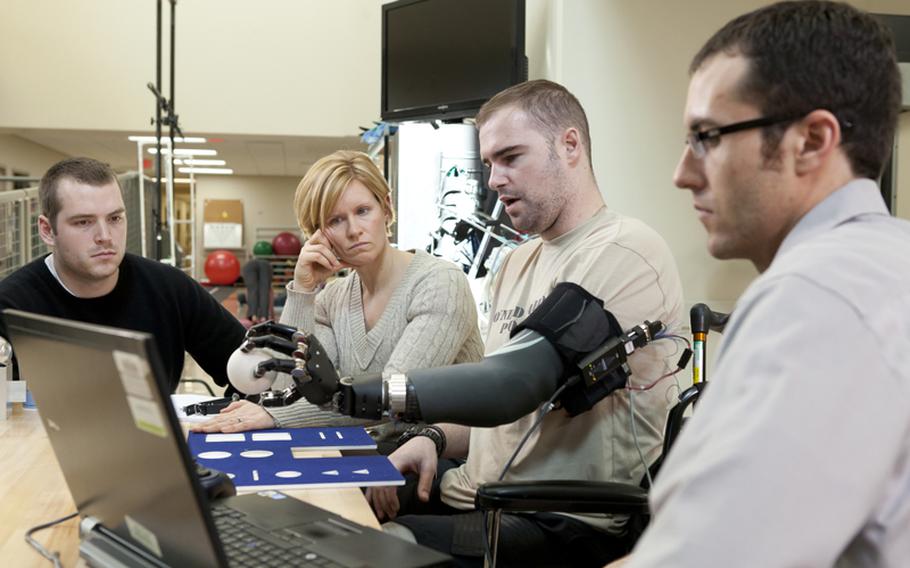 The modular prosthetic limb created by Johns Hopkins University's Applied Physics Laboratory allows more freedom of movement for upper limb amputees. Lower limb prosthetics have come a long way in recent years, allowing servicemembers to run marathons and even return to duty, however, there have been few advances in upper limb prosthetics. Here, Air Force Tech Sgt. Joe Deslauriers picks up a ball using the revolutionary new APL prosthetic. Deslauriers is helping APL researchers to advance the arm in hopes that it will soon be ready for the public. (Courtesy of Johns Hopkins University)

Air Force Tech. Sgt. Joe Deslauriers is determined as he slowly extends his left hand and reaches for the object in front of him. The explosive ordinance disposal technician rotates his hand at the wrist; his fingers bend at the joints, closing in around it. He raises it, slowly and deliberately.

The object isn&rsquo;t an improvised explosive device on a dusty road in Afghanistan. It&rsquo;s a ball on a table at Walter Reed National Military Medical Center, and the people who hang on every movement are doctors and scientists who watch the groundbreaking effort in awe.

Picking up a ball is something most take for granted, but not Deslauriers. He&rsquo;s the first wounded servicemember to be fitted with the revolutionary modular prosthetic limb &mdash; designed to work in sync with his thoughts, sending electrical signals from the brain to the remaining muscles to seamlessly move each and every joint, each and every finger. Deslauriers lost his left arm in a bomb attack in September 2011; his experimental replacement was built by Johns Hopkins University&rsquo;s Applied Physics Laboratory.

Deslauriers is testing the APL prosthesis to help researchers identify improvements so it can be commercialized for use by wounded servicemembers and amputees around the world. When researchers came to Walter Reed looking for volunteers to do the testing, an occupational therapist thought Deslauriers was a good candidate and suggested he participate. After some initial trials, Deslauriers was chosen to lead the way on the project.

&ldquo;We believe very strongly that those who are willing to put their lives in harm&rsquo;s way deserve the very best,&rdquo; Dr. (Col.) Paul Pasquina, Walter Reed&rsquo;s chief of Orthopedics and Prosthetics, said in a news release about the collaboration to develop what he called &ldquo;modern solutions to loss of an upper limb.&rdquo;

There have been stunning advances in lower limb prosthetics over the past few years, allowing wounded servicemembers to return to duty, run marathons and play sports.

Doctors at Walter Reed say there have been relatively few advances in upper limb prosthetics. In fact, a large portion of servicemembers abandon the available prostheses, and rely solely on their remaining limb if they have one, even at the risk of overuse injuries.

Deslauriers sees his role as a way to help fellow amputees created by what he calls the &ldquo;IED war.&rdquo;

The number of amputees has been on the rise as IEDs became the preferred tactic of insurgents in Iraq and Afghanistan. Last year, 240 servicemembers lost a major limb, according to Defense Department statistics, the highest annual total since the two conflicts began more than 10 years ago. About 1,450 U.S. troops have suffered a major amputation, defined as losing at least one arm or leg above the wrist or ankle, in the wars in Iraq and Afghanistan. Of those, 258 have &ldquo;upper extremity involvement,&rdquo; according to Walter Reed spokeswoman Katie Bradley.

&ldquo;Any input I can put into the program to help them out, it&rsquo;s an honor for me,&rdquo; Deslauriers said.

Deslauriers, from Bellingham, Mass., played football at Framingham State University before an injury prompted him to accelerate his plans to join the Air Force in 1997. Like his father, he had hoped to become a firefighter in the Air Force but there were no openings, so he joined EOD.

In 2006, Deslauriers was part of a team of EOD techs who in six months discovered, disarmed or detonated about 200 IEDs in Iraq. In 2008, he went to Afghanistan for the first time, personally disarming 14 to 20 IEDs, he said.

Last year, Deslauriers went back to Afghanistan, this time with Marines in the deadly Sangin district of Helmand province, after deaths and injuries created a shortage of techs. He had been working with a route clearance unit for about three weeks when tragedy struck.

First, a vehicle hit an IED. The rescue vehicle sent in to help was also hit, and a third clearance vehicle was struck after that.

&ldquo;We realized there were a lot of IEDs in that area, so what do I do? I get out of my vehicle to investigate,&rdquo; Deslauriers said with an exasperated laugh.

Walking around with a mine detector, Deslauriers&rsquo; job was to do post-blast analysis. Not only was he to assess the damage, but he was also tasked with collecting evidence that might identify signatures and lead to the bombers. He was about to pick up his gear and head back to the truck when he stepped on a pressure trigger, detonating an IED packed with about 15 pounds of explosives. The bomb ripped through his body.

Deslauriers fought to stay awake. As he lay in the Afghan dust, his breathing labored, he looked at his mangled left arm, which he would lose just below the elbow. The corpsman and three Marines on the scene would not let him look down at his legs, which would both be lost.

Despite the critical injuries, he lived to see his son born a month later.

Amputees who lose a limb to a bomb blast still have intact nerves traveling down the spinal cord, which carry signals from the brain to the limbs for movement. Even though they don&rsquo;t have a limb, their brains can still send these signals to the remaining muscles.

The current prosthetic technology uses several surface electrodes attached to the skin, which pick up the brain&rsquo;s electrical signals from muscle contractions. These contractions are converted into a computer signal, which controls the prosthesis.

Upper limb prostheses are judged by the degrees of freedom they provide to amputees, Pasquina said in a recent phone interview. A degree of freedom is calculated as one independent joint movement.

Current technology allows upper limb amputees only to flex and extend at the elbow, open or close a hand, and rotate a wrist right and left &mdash; or three degrees of freedom. They lack fluidity in movement and must be moved in deliberate steps.

Pasquina said the common complaint about upper limb prostheses is that they are too heavy. Deslauriers said the current crop also lacks durability and dexterity in the fingers and thumbs. His current personal model features only two surface electrodes.

The task is Herculean: DARPA has pledged to create an upper limb prosthesis that responds to direct neural control within this decade. In addition to improving motor functions, its scientists are also pledging that this next generation of prostheses will allow amputees to feel &mdash; something that still eludes them, Pasquina said.

The program funded two upper limb prosthetics projects, both of which will increase the number of surface electrodes.

The first was by DEKA Research and Development Corp. in New Hampshire and was designed to get to market quickly. Completed about a year ago, the DEKA arm allows for 10 degrees of freedom. It&rsquo;s undergoing clinical trials and has received positive marks.

The APL&rsquo;s modular prosthetic arm was given more development time than the DEKA arm and was tasked to do everything a human hand can do &mdash; to move every joint independently.

Deslauriers has been helping the team from APL improve its arm, which weighs 9 pounds, features metallic fingers and wrist, and has eight surface electrodes. The APL arm offers 22 degrees of freedom.

&ldquo;I don&rsquo;t have to think about it too much,&rdquo; Deslauriers said of operating the modular prosthesis. &ldquo;I just reach out.&rdquo;

Deslauriers has helped the APL team with weight issues, fit and the ease of use of the model. &ldquo;They&rsquo;re using my input to improve this hand. &hellip; It&rsquo;s the closest thing to a human hand in capabilities that we have,&rdquo; he said.

He received training with a virtual hand before he was fitted with the first of only a few trial models.

On Jan. 24 &mdash; almost four months to the day after an IED almost claimed him in the Afghan desert &mdash; Deslauriers became the first to use the advanced modular prosthesis.

Pasquina said that with Deslauriers&rsquo; stewardship, the APL modular arm has made great strides.

&ldquo;The ultimate decider is guys like Joe Deslauriers,&rdquo; Pasquina said. &ldquo;They&rsquo;re here with him making adjustments as they go along.&rdquo;

Deslauriers, now 33, wants to stay in the Air Force for six more years so he can retire with 20 years of service. He also would like to help train the next generation of EOD technicians.

&ldquo;I want to stay in,&rdquo; he said. &ldquo;I feel like I have a lot to offer the Air Force.&rdquo;

Once he is released from Walter Reed, he plans to move back to his base at Hurlburt Field, Fla., into an accessible house that was donated to his family.

Deslauriers still struggles with what has happened to him, but he thanks his wife of almost two years, Lisa, for helping him get through the infections, complications, countless surgeries and the mind-altering pain medication.

&ldquo;I basically came to terms with losing limbs or getting killed a long time ago; otherwise, I wouldn&rsquo;t have been able to do my job,&rdquo; Deslauriers said. &ldquo;I&rsquo;m not perfect, but I have to be strong and not let the negative get to me.&rdquo;

Lisa Deslauriers said the new upper limb prosthetic technology is promising, even though it can never fully replace an actual limb. She equated waiting for the technology, and using what is available, to a marathon, not a sprint. With the finish line a long way off, the most important thing is that her son will know his father.

&ldquo;I think the prosthetic technology of the future is a huge sign of optimism for all families,&rdquo; she said. &ldquo;I think it&rsquo;s still a bit early on for us. Joe hasn&rsquo;t had the opportunity to do all the things he did before he was injured, but the possibilities are there. There is hope.&rdquo;

Thanks to the prosthesis, Deslauriers lives off base, drives by himself, walks the dog, physically wheels himself in his chair and holds his infant son, Cameron.

&ldquo;It&rsquo;s not the life I would choose but it&rsquo;s a life I can enjoy,&rdquo; he said. &ldquo;I have freedom &hellip; They&rsquo;ve given me a life back.&rdquo;