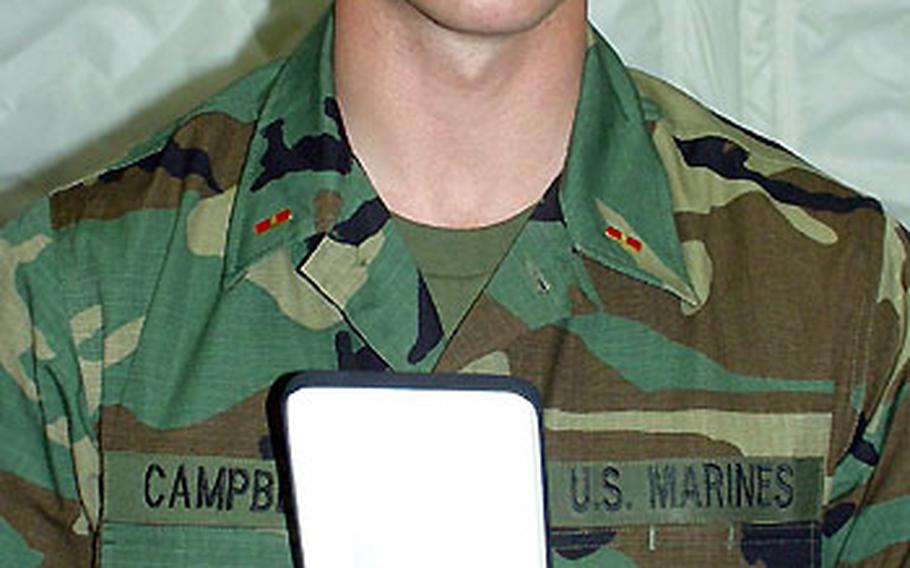 Marine Warrant Officer Chris Campbell holds the Purple Heart he was given after being wounded in Nasiriyah, Iraq, on March 26. (Scott Schonauer / S&S)

NAVAL STATION ROTA, Spain &#8212; Chief Warrant Officer Chris Campbell once told his younger Marines that if he ever had to fire his 9 mm pistol, &#8220;then something has gone very, very wrong.&#8221;

That comment became terribly prophetic March 26 just outside of Nasiriyah in southern Iraq.

As his unit, the 2nd Battalion, 8th Marines, rested at an abandoned gas station that day, explosions and gunfire broke the evening silence, forcing him and his eight Marines to run for cover.

Seconds later, Campbell &#8212; a member of the North Carolina-based 2nd Radio Battalion &#8212; took out his pistol.

The situation would only get worse.

The Iraqi forces were too far away for Campbell to shoot, so he climbed into a Humvee and grabbed night-vision goggles. It was pitch black, and he wanted to find where the shots were coming from.

He spotted two places. He saw some muzzle flashes and directed the Marines with rifles to shoot at them. Most of the activity was coming from behind a building, and Campbell wanted to get a better look. He prepared to run along the wall.

He looked back and saw a hole in the wall the size of a small pizza. He felt a dull pain in his arm, but he didn&#8217;t think he was seriously hurt.

No big deal, he thought. So he stayed in the battle and located a couple of the Iraqi soldiers for the team. One of his Marines called in some artillery, which Campbell said &#8220;ended the whole fight.&#8221;

The battle lasted about an hour, but seemed like three days.

It wasn&#8217;t until later, after he made sure the other wounded Marines got first aid, that Campbell noticed the bleeding in his arm wouldn&#8217;t stop. He went to a Navy corpsman to get bandaged and hoped to quickly return to his unit. But he had a coin-size hole in his left bicep.

&#8220;Something had actually come into my arm, a particle of the wall or something that shot in there,&#8221; Campbell said.

Within minutes, he was evacuated and eventually taken to a hospital in Kuwait. Last Saturday, he arrived in Rota at Fleet Hospital Eight, a 116-bed tent infirmary that has treated 125 U.S. casualties since the war started March 20.

When doctors say he is ready, Campbell will be sent to his home base at Camp Lejeune, N.C., where he will be reunited with his wife and their four young children. Later, he says, he will tell them how he earned the Purple Heart. He has not seen his family since he left Norfolk on the USS Kearsarge on Jan. 11.

He might also explain to his family something they might not understand &#8212; how there is a part of him that is &#8220;hugely&#8221; disappointed because he is not with his comrades. He has no idea where his unit is, but he knows he has been replaced. That is probably more painful than the hole in his arm.

Campbell, who has served nine years in the military, said the war has changed his perspective on life, but it wouldn&#8217;t deter him from making the Marine Corps a career.