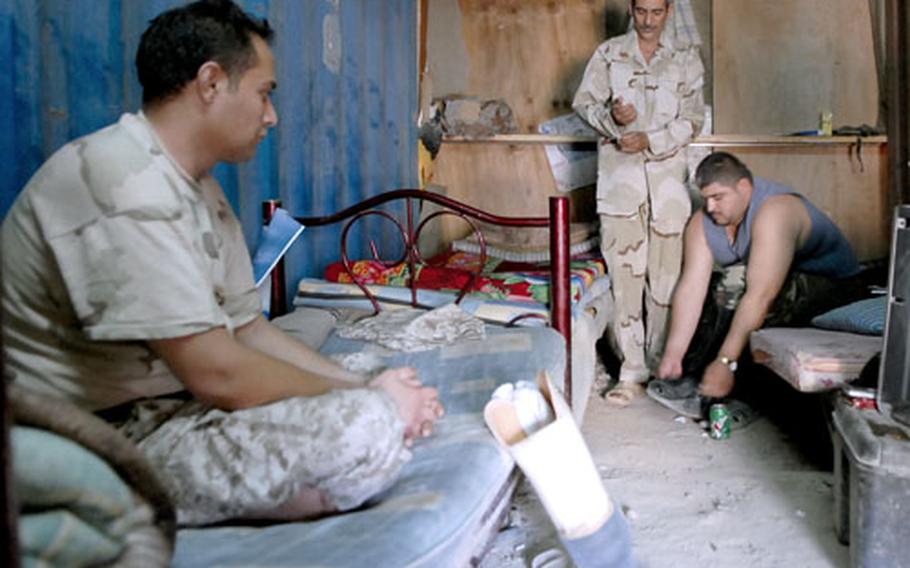 Wounded Iraqi soldiers Pfc. Qusay Aziz, Sgt. Hadi Ramadan and Pfc. Yahia Abud, left to right, live in a metal shipping container in Baghdad&#39;s Khadamiyah disctrict. There is no running water, and men use a field for a toilet. (Heath Druzin / S&S)

Wounded Iraqi soldiers Pfc. Qusay Aziz, Sgt. Hadi Ramadan and Pfc. Yahia Abud, left to right, live in a metal shipping container in Baghdad&#39;s Khadamiyah disctrict. There is no running water, and men use a field for a toilet. (Heath Druzin / S&S) 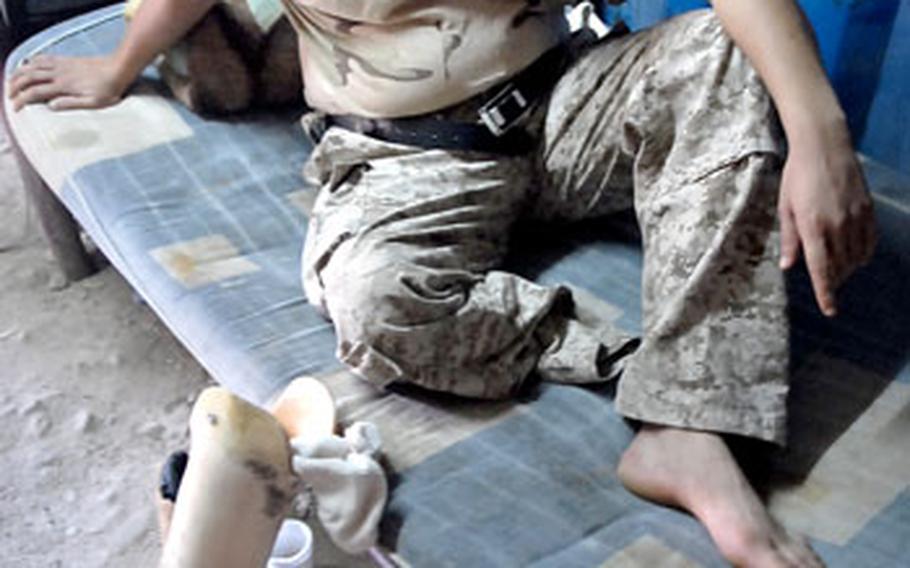 Iraqi Army Pfc. Qusay Aziz sits in his cot in the shipping container he shares with three other injured soldiers. Aziz lost his leg to a roadside bombs and, like many Iraqi soldiers, must pay for his medical expenses himself. (Heath Druzin / S&S) 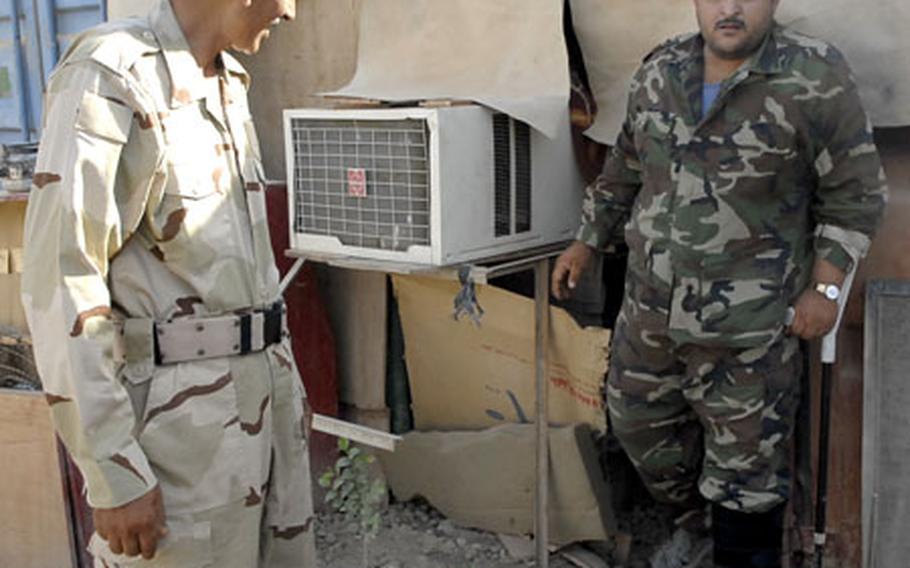 BAGHDAD &#8212; For two years now, Pfc. Qusay Aziz has risen each morning in the dank confines of a metal shipping container, rolled off a stained, torn mattress, put on his right leg and reported for duty.

He and three other severely injured Iraqi army soldiers live in the container on the edge of an Iraqi National Police base in Baghdad&#8217;s Khadamiyah district and, like many of their wounded comrades, struggle to pay medical bills and have been repeatedly refused retirement by the Iraqi government.

Throughout Iraq, the toll of the war is visible in empty sleeves, jagged scars, pronounced limps. Iraqi soldiers are especially vulnerable, often patrolling without body armor or armored vehicles.

Solid casualty numbers for the Iraqi security forces are hard to come by, but they almost certainly dwarf those of their American counterparts. A conservative estimate by the independent Web site iCasualties.org puts Iraqi security forces&#8217; deaths at more than 9,000 since the U.S. invaded in 2003, more than twice as many as the United States. If injury numbers follow suit that would put the number of injured Iraqi soldiers at more than 60,000.

Unlike the U.S., though, Iraq does not have a medical network for the war wounded. Nor is there any coherent program for medical retirements and soldiers say they pay for medical expenses out of pocket. On a typical Iraqi soldier&#8217;s salary of around $600 per month, paying for medical care in Iraq&#39;s shattered, expensive medical system can be daunting.

Lt. Gen. Ali Qaidan Majeed, commander of Iraqi ground forces, admits that Iraq does not have an adequate safety net for its wounded veterans and says he hopes parliament will pass stalled legislation that would create a retirement system for injured soldiers and help them pay for their medical expenses. Without the legislation, the Iraqi military lacks a retirement system for those wounded in action and they must remain on duty or lose their salary entirely. &#8220;I agree, we are one of the only countries in the world that doesn&#8217;t have this kind of law to preserve rights for injured veterans,&#8221; he said.

Meanwhile, Aziz and his three container mates, with injuries ranging from a missing arm to multiple shrapnel wounds, work one week on, one week off. Their only toilet is an empty, overgrown lot; there is no shower and no running water. During summer, the heat seeps past the dingy rugs and metal sheet covering the container&#8217;s open entrance, a faulty air conditioner offering little relief; a damp chill takes hold during the winter. During the rainy season, the roof leaks.

Pfc. Yahia Abud&#8217;s heel and ankle are an amorphous, scarred mess, the result of a mortar blast that ripped apart his foot in 2004. He wears a walking cast and hobbles around using a metal crutch. He says on his salary, he can&#8217;t take care of his wife and three children and pay for the regular doctor visits and painkillers his injuries require.

Another container resident, Sgt. Hadi Ramadan, was riddled with shrapnel from a mortar in 2004. He has repeatedly put in for retirement and repeatedly been denied. Ramadan, who supports a wife and eight children, is not optimistic his lot will improve any time soon.

Unable to go on patrol anymore, the soldiers are officially there to guard a weapons cache, but their days are spent in boredom, smoking cigarettes and worrying about families they now struggle to support.