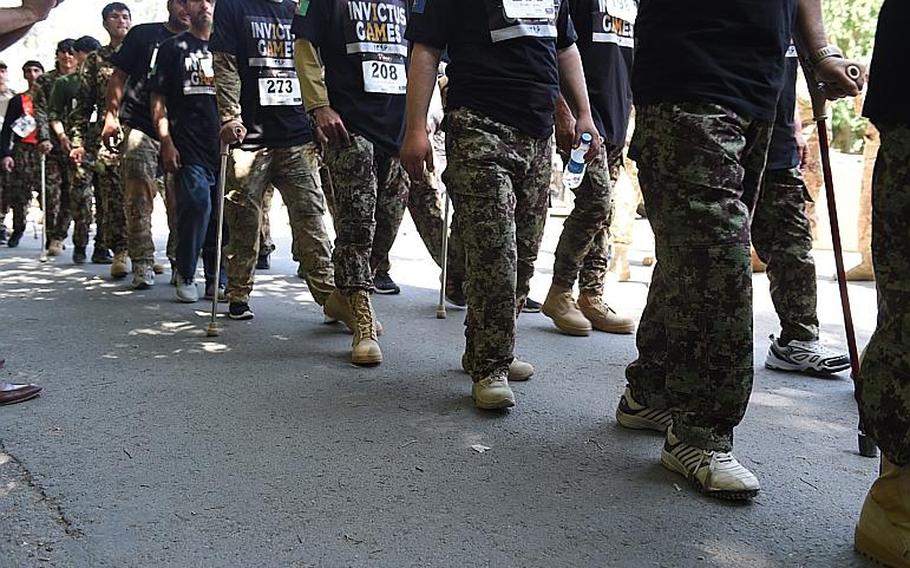 Buy Photo
Wounded Afghan soldiers arrive at Resolute Support headquarters in Kabul, Afghanistan, May 13, 2017, to compete for a chance to participate in the Invictus Games in Toronto in September. (E.B. Boyd/Stars and Stripes)

Buy Photo
Wounded Afghan soldiers arrive at Resolute Support headquarters in Kabul, Afghanistan, May 13, 2017, to compete for a chance to participate in the Invictus Games in Toronto in September. (E.B. Boyd/Stars and Stripes) 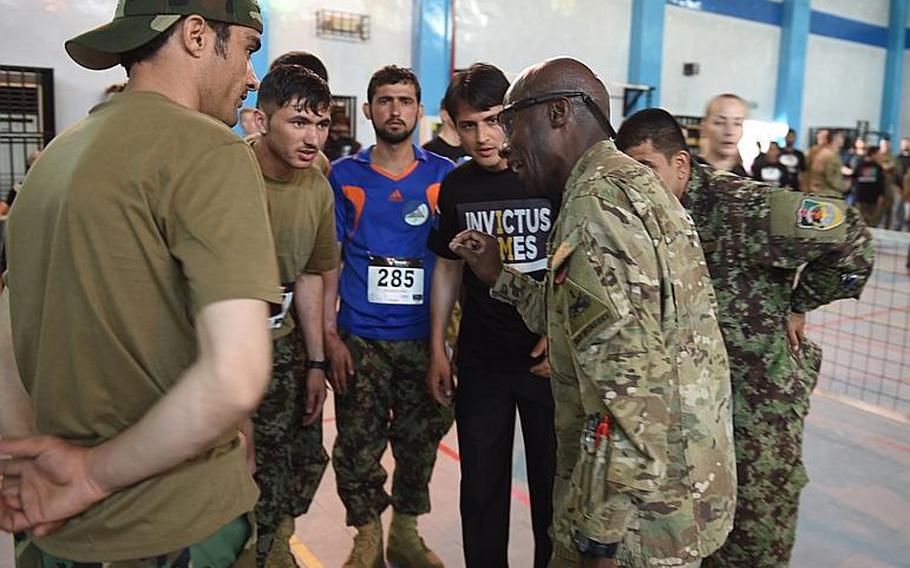 Buy Photo
Sgt. Maj. Eugene Russell coaches a group of wounded Afghan soldiers at trials for the Afghan team to the 2017 Invictus Games, at Resolute Support headquarters in Kabul, Afghanistan, Saturday, May 13, 2017. (E.B. Boyd/Stars and Stripes) 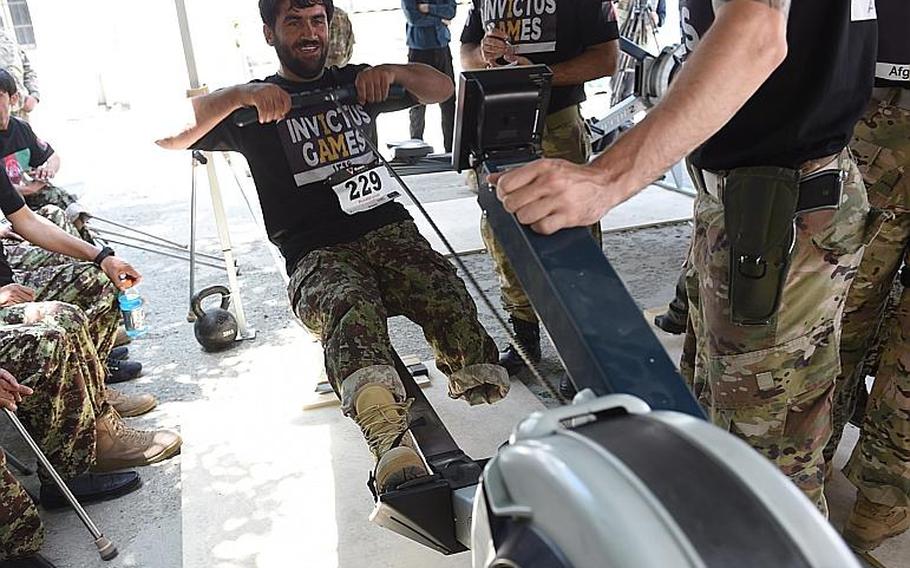 Buy Photo
A wounded Afghan soldier competes on a rowing machine for a chance to join Afghanistan?s team for the 2017 Invictus Games, at Resolute Support headquarters in Kabul, Afghanistan, Saturday, May 13, 2017. (E.B. Boyd/Stars and Stripes) 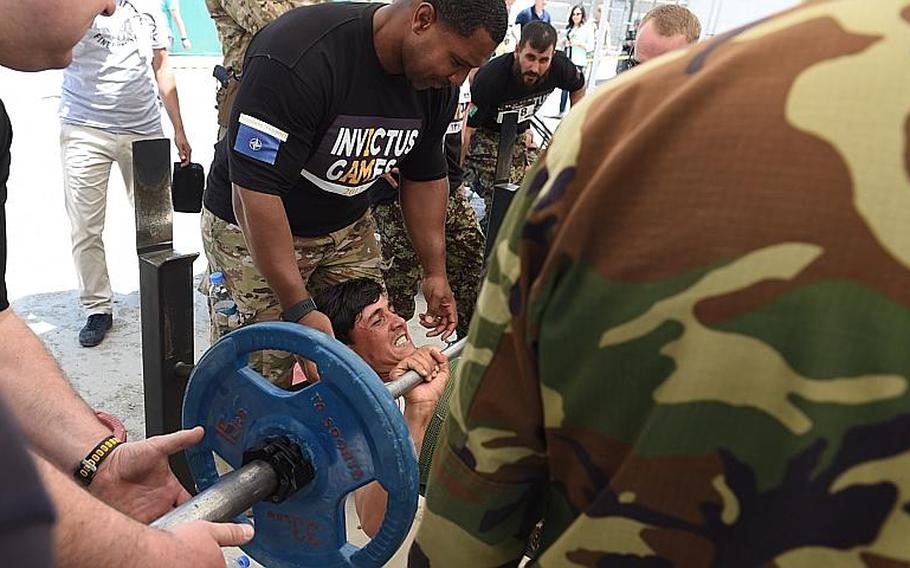 Buy Photo
Senior Master Sgt. Herbert Hayes, who works in airspace management at Resolute Support headquarters, assists an Afghan soldier competing for a slot on Afghanistan?s team for the 2017 Invictus Games, in Kabul, Afghanistan, Saturday, May 13, 2017. (E.B. Boyd/Stars and Stripes) 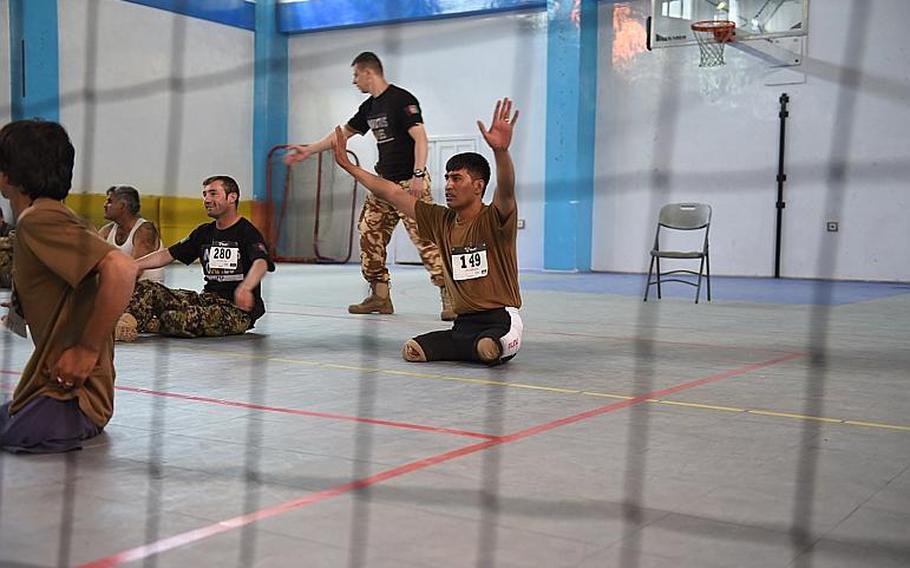 Buy Photo
Nasir Ahmad, 27, who lost his legs after stepping on an IED in Helmand in 2015, competes for a slot on Afghanistan?s team for the 2017 Invictus Games,at Resolute Support headquarters in Kabul, Afghanistan, Saturday, May 13, 2017. Later that afternoon, he found out would be headed to the games in Toronto this fall. (E.B. Boyd/Stars and Stripes) 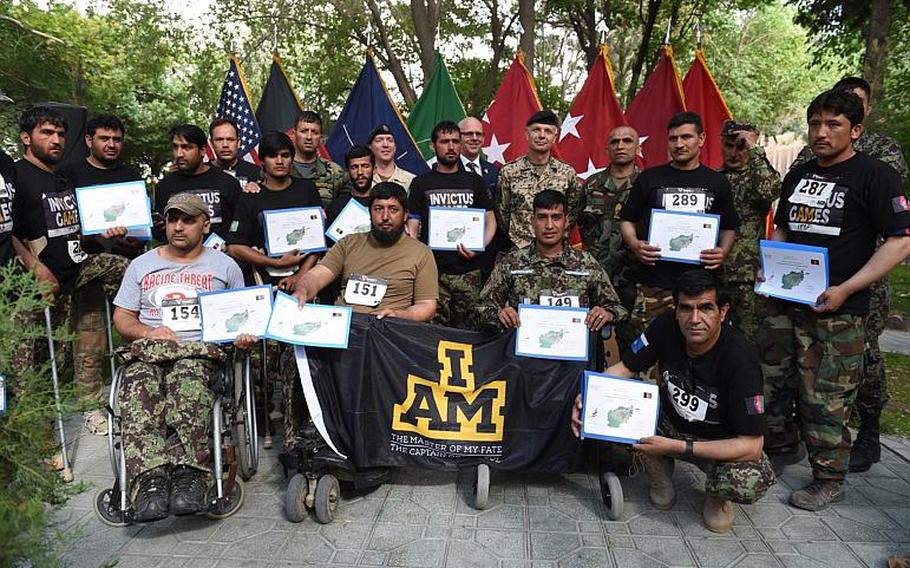 Buy Photo
The team of wounded Afghan soldiers selected to represent their country in the 2017 Invictus Games, shows off certificates at the team trials closing ceremony at Resolute Support headquarters, Kabul, Afghanistan, Saturday, May 13, 2017. (E.B. Boyd/Stars and Stripes)

KABUL, Afghanistan – More than 70 wounded Afghan soldiers and veterans competed at a NATO base on Saturday for a chance to participate in the annual international wounded warrior Invictus Games, which will take place in Toronto in September.

Inside the Resolute Support headquarters gym, the athletes, some without legs, others with an injured hand or a missing eye, sat on the floor of a volleyball court, spiking a ball back and forth. Outside, soldiers lifted weights under the watchful eyes of U.S. troops clad in black “Invictus” T-shirts. Next to them, others competed on rowing machines, including one who had no hands.

Britain’s Prince Harry, who served in Afghanistan twice, created the games three years ago to celebrate the sacrifices and spirit of warriors injured in war. Named after the Latin word for “unconquerable,” the event previously has been held in London and Florida.

Speaking at an opening ceremony for the Afghan team trials, Gen. John Nicholson, the top U.S. commander in Afghanistan, said the games were “a demonstration of our respect and appreciation for all you have done.”

More than 100 troops from a dozen coalition nations lined the leafy street in front of the base’s command building, cheering and applauding the arriving Afghan athletes.

“We owe a tremendous debt to you, especially to your martyrs, your disabled, and your injured,” Nicholson said.

Sgt. Maj. Eugene Russell, the sergeant major of Resolute Support’s Train, Advice and Assist Command-East, had been recruited to coach soldiers from the Afghan National Army’s 201st Corps. On the sides of the volleyball court, he clapped loudly and cheerfully shouted encouragement to the athletes.

Russell said the games, including the selection trials, gave the competitors, many still active duty, a chance to represent their country“maybe not on the battlefield, but on the international stage.”

As much as U.S. veterans face challenges to recover from their wounds, most Afghan troops receive far less help. Surgeons who amputate limbs, for example, aren’t always able to prepare them properly to fit prosthetics later on.

On the volleyball court, Nasir Ahmad rallied his teammates, energetically shouting instructions mid-game and throwing up his hands with a loud roar on each successful point.

In 2015, Ahmad, 27, was a first lieutenant leading a platoon in a clearance operation in the Helmand district of Sangin, when he stepped on an IED. He woke up in a Kabul hospital with no legs. Today he lives at home, sometimes going to a Red Crescent gym to play wheelchair basketball with other veterans.

Ahmad speaks intensely about the missions he led to clear Taliban fighters from heavily fortified and widely mined compounds. “Everyone knew it was very difficult,” he said.

Sitting in a wheelchair, Ahmad said he’d return to the front lines in an instant if he had prosthetic legs. For now, he sees his role as an officer as encouraging his fellow troops in events such as these.

“They shouldn’t think they can’t do anything because they are disabled,” he said. “This gives them courage to know they are still alive and can do something in their lives.”

Later in the afternoon, in a shaded garden, the names of seven competitors who qualified and their alternates were read aloud. As they accepted their certificates, the athletes proudly shouted out their thanks.

As the ceremony wound to an end, Ahmad, sitting near the front in his wheelchair, flashed a big smile and waved the blue document signifying he would be heading to Toronto in the fall.