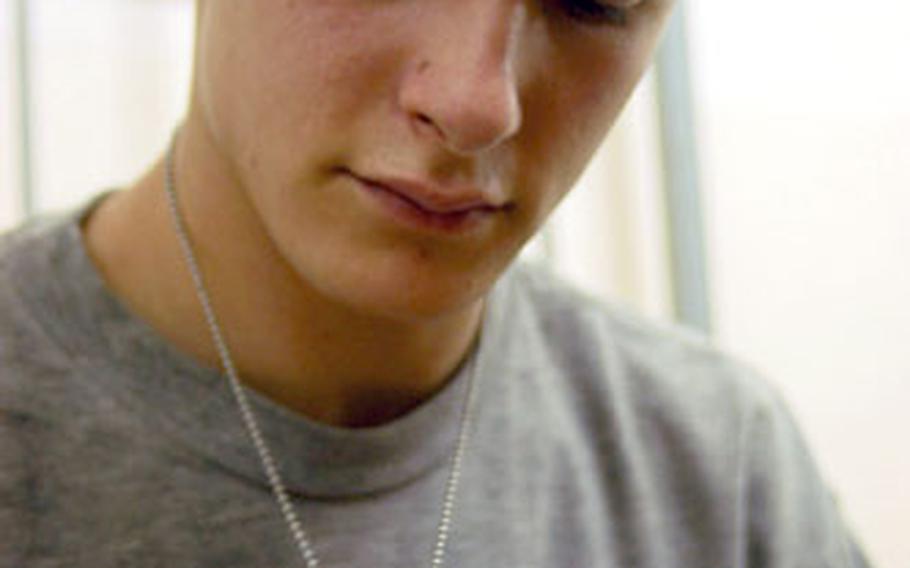 Pvt. Shane Hornbeck, 20, from Carrollton, Ky., looks at the bullet fired at him while he was getting into his Humvee in Baghdad. The round struck Hornbeck’s side protection plate, and he now wears it around his neck. (Ben Murray / S&S)

Pvt. Shane Hornbeck, 20, from Carrollton, Ky., looks at the bullet fired at him while he was getting into his Humvee in Baghdad. The round struck Hornbeck’s side protection plate, and he now wears it around his neck. (Ben Murray / S&S) 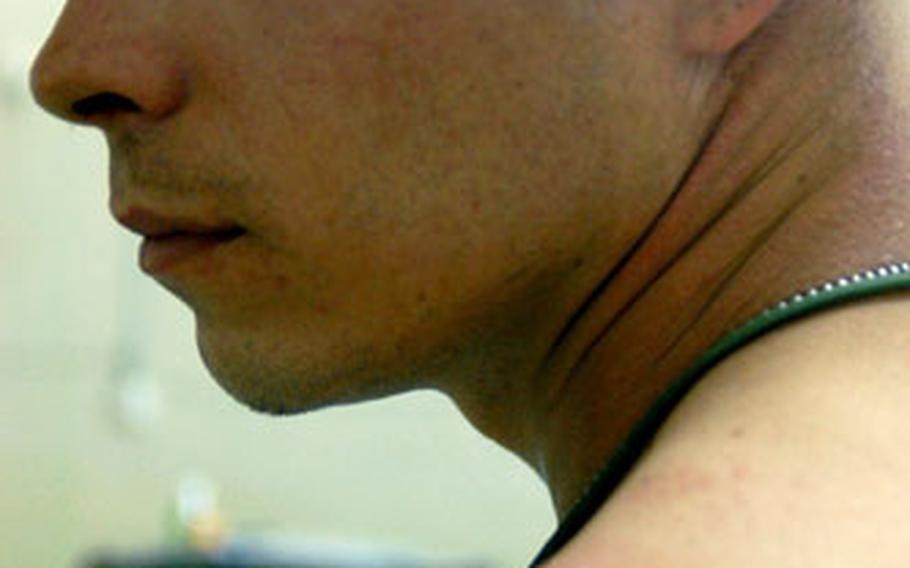 Pvt. 1st Class Chase Brown, 32, from Sweetwater, Tenn., shows where shrapnel from a grenade cleaved his shoulder several weeks ago when he was attacked outside his Humvee in the Baghdad neighborhood of Adhamiyah. (Ben Murray / S&S) 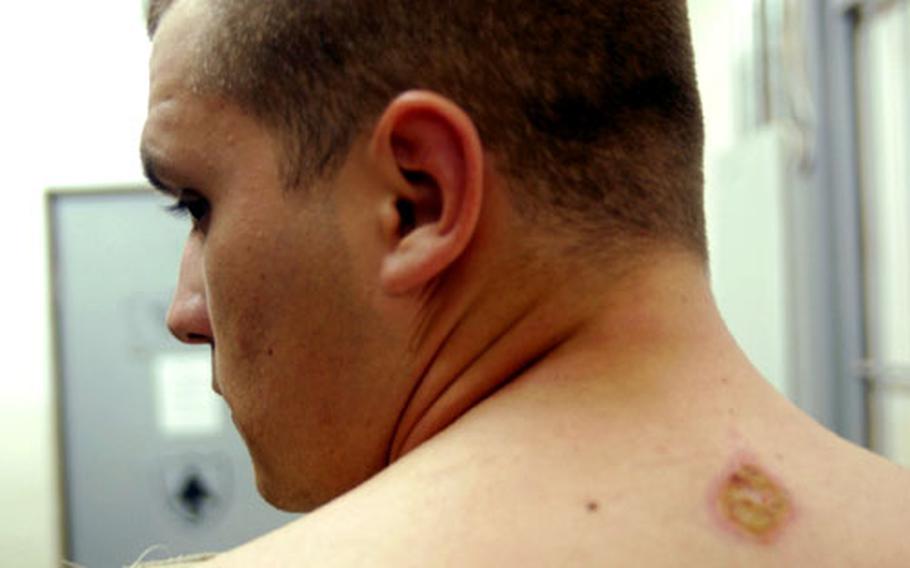 Pvt. 1st Class Tyler Norager, 20, from Clinton, Utah, didn’t know bomb fragments from a roadside bomb had burned a hole in his skin until he got to an aid station. (Ben Murray / S&S) 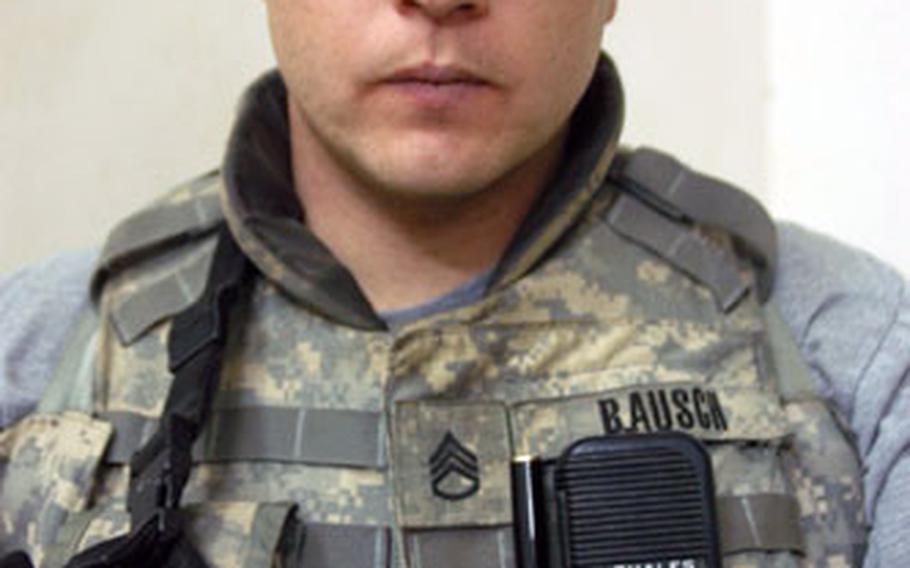 Staff Sgt. Jeremy Rausch stood 20 feet from a bomb hidden in a pile of trash when it detonated in Adhamiyah, a neighborhood in Baghdad, last month. He suffered a concussion but avoided shrapnel wounds. (Ben Murray / S&S)

He had just left the base on a routine mission into the city Oct. 22 when there was a deafening roar from the roadside.

The 20-year-old from Clinton, Utah, had been knocked unconscious by a powerful bomb that split open his Humvee and burned a hole in the back of his neck.

The explosion killed the truck commander, Sgt. Willsun Mock, and the interpreter riding behind him, and it blew two &#8220;basketball-sized&#8221; holes through the armor of the Humvee, Norager said.

But he was alive.

The private, still healing from the effects of the blast last week, is one of a number of men from the 1st Battalion, 26th Infantry Regiment, 1st Infantry Division based in Schweinfurt, Germany, who have been wounded but remain on duty.

Others have been shot, showered with shrapnel from grenades and suffered concussions from blast waves, but they are still on the streets of the capital, day after day &#8212; one man returning to work just eight days after a sniper shot him through the leg.

Many share a sense of confusion about the moments after they were hit, but they retain some vivid images and sensations.

&#8220;It felt like the truck got hit by a moving train,&#8221; Norager said of the blast that hit his Humvee. He was burned by pieces of shrapnel but was unaware of the wound until he reached the aid station, he said.

Almost to a man, the following members of the 1-26th also reacted with an overwhelming desire to strike back at the enemy &#8212; Norager himself pulled security at the blast site after hauling himself from the truck &#8212; but none ever saw their assailants. Insurgents in Iraq very rarely stand and face American forces, a trait that endlessly irritates soldiers here, and the opportunities for vengeance are slim.

The Carrollton, Ky., native had been pulling security and watching one of the ever-present groups of children at an intersection for about 15 minutes. As he turned to his left, he said, the bullet struck.

He first thought a firecracker &#8212; possibly thrown by the kids &#8212; had gone off and somehow hit him. But it was the sound of the bullet hitting his protective side plate.

Hornbeck jumped, he said, then managed to drag himself into the Humvee for protection.

When he figured out the plate had stopped the round, he said, there was a period of &#8220;unbelievable shaking&#8221; and then a burning need to go get the gunman.

Sgt. Shawn LaDue, 27, from Phoenix had the same reaction when he was shot by a sniper last month.

He was shot in the side, but above his plate, under his armpit. The bullet exited through his back, missing his spine and vital organs, he said.

But both men have pressed on. Hornbeck, not seriously hurt in his near-death experience, stayed on patrol for almost three more hours, then refused to let someone take his position as driver of his Humvee.

Hornbeck and LaDue also said it&#8217;s unlikely U.S. forces would find snipers such as the ones who shot them.

A fraction of a secondAs with other men from the 1-26th wounded in Baghdad recently, Pfc. Chase Brown was just on a routine patrol when things suddenly went bad.

Brown was outside the rear vehicle of a convoy, keeping an eye on a side street near his truck when something caught his eye.

&#8220;As soon as I turned around I saw this thing tinkering down the road,&#8221; he said. Brown realized what it was just a fraction of a second before the grenade exploded &#8212; only three to five feet from him, he estimates. He managed to turn halfway around before it went off, but couldn&#8217;t get out of the way of the blast.

The 32-year-old from Sweetwater, Tenn., had been hit with more than two dozen pieces of shrapnel and was bleeding from multiple wounds when he fell.

The explosive that hit Staff Sgt. Jeremy Rausch, however, wasn&#8217;t so weak.

Rausch&#8217;s unit was burning trash on a particularly troublesome street in the Adhamiyah neighborhood when a bomb hidden in the garbage went off about 20 meters from the dismounted soldier.

The blast was strong enough to shut the open doors of Humvees down the street, and rocked the exposed soldier with a blinding concussion wave.

He was spared shrapnel wounds, he said, but received a severe concussion from the force of the explosion.

Trying to move in the moments after the blast, he felt nauseous and confused and ran into a pole, he said.

He now has periodic short-term memory problems and will do things like get in line for chow and then later find himself at the end of the line with a plateful of food but no memory of how it got there.

Rausch, who survived two bomb explosions in his first tour of Iraq, later said he, too, was angered by getting hit.

Still, he counted himself lucky &#8212; at one point that day, he&#8217;d unknowingly thrown a thermite grenade directly onto the bomb that later exploded in the heat.