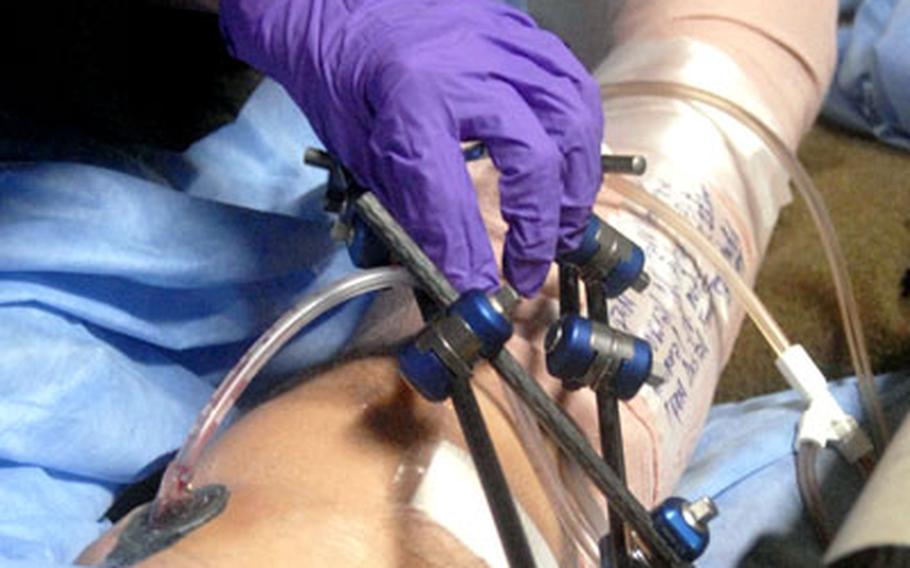 Air Force Maj. Bonnie Bosler, a flight nurse with the 514th Aeromedical Evacuation Squadron, tends to the leg wound of a Marine who was shot in Afghanistan. The wound is being treated with the V.A.C. Freedom, a portable wound vacuum system, as part of an ongoing Air Force study to determine the feasibility of using the devices on medevac flights between Germany and the States. (Steve Mraz / S&S)

Air Force Maj. Bonnie Bosler, a flight nurse with the 514th Aeromedical Evacuation Squadron, tends to the leg wound of a Marine who was shot in Afghanistan. The wound is being treated with the V.A.C. Freedom, a portable wound vacuum system, as part of an ongoing Air Force study to determine the feasibility of using the devices on medevac flights between Germany and the States. (Steve Mraz / S&S) 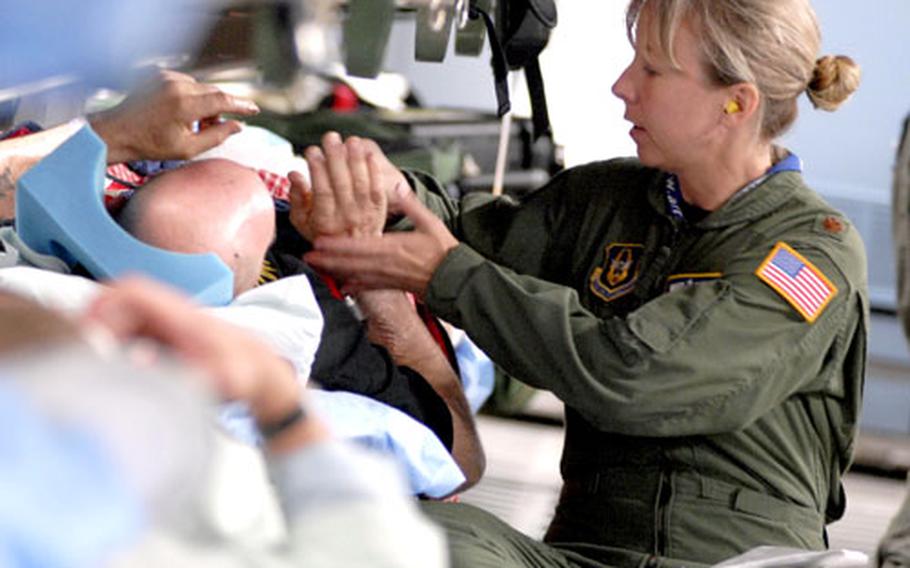 Air Force Maj. Elizabeth Barlow, a flight nurse with the 459th Aeromedical Evacuation Squadron, checks on Army Master Sgt. John Souza during a June 29 medical evacuation flight from Ramstein Air Base and Andrews Air Force Base, Maryland. Souza was wounded during a bomb blast in Sadr City. For the flight as part of an Air Force study, Souza’s leg wound was outfitted with the V.A.C. Freedom, a portable wound vacuum system. (Steve Mraz / S&S) 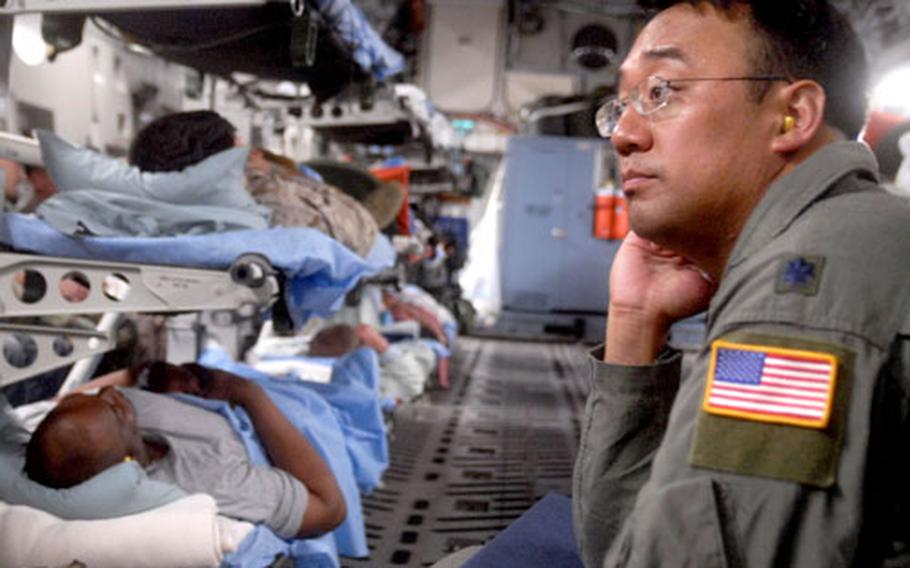 Air Force Lt. Col. (Dr.) Raymond Fang sits in a C-17 loaded with war wounded as it prepares to depart Ramstein Air Base, Germany, for Andrews Air Force Base in Maryland on June 29. Fang, a trauma surgeon at Landstuhl Regional Medical Center, is conducting a study on the feasibility of using the V.A.C. Freedom, a portable wound vacuum system, on medical evacuation flights between Germany and the U.S. (Steve Mraz / S&S)

At 35,000 feet &#8212; stacked underneath two other stretchers on a medical evacuation flight to the States &#8212; Army Master Sgt. John P. Souza is recovering from a blast wound suffered in Sadr City, Iraq.

On this Sunday in late June, the 52-year-old is also serving as patient No. 14 in an Air Force medical study exploring the use of the V.A.C. Freedom device on medevac flights from Germany to the U.S.

In this flying military ambulance, in this Air Force C-17, Souza is one of two patients hooked up to the device that eliminates the need for nurses to keep repacking his open left leg wound with gauze during the roughly nine-hour flight. The $25,000 machine also eliminates the painful removal of soaked-through gauze from wounds once patients arrive at either Walter Reed Army Medical Center or the National Naval Medical Center in Bethesda, Md.

"I gotta tell you the vac is just awesome," Souza said.

The small blue machine sucks fluid from the blast wound in Souza&#8217;s left leg. Theoretically, it promotes healing, minimizes the risk of wound infection, requires less maintenance by nurses and does away with the gauze changings.

Typically, open wounds require twice daily gauze changings. With the wound vacuum system, a patient can go two to three days before having a special sponge that was placed in the wound changed out.

"Once you leave the hospital, all they do is add more dressings," said Air Force (Dr.) Lt. Col. Raymond Fang, a trauma surgeon at Landstuhl Regional Medical Center who is heading up the wound vac study. "So the stuff that&#8217;s in the bottom of your wound stays there until you get to the next place."

Vacuum-assisted closure technology has been around for almost 20 years, but a portable machine was not initially approved for flights.

The Air Force cleared the V.A.C. Freedom system for use on flights. However, concerns over a jury-rigged wound vacuum system that had previously been used with varying degrees of success on medevac flights during the early years of the war prompted the formal study.

"Sometimes those wounds &#8212; at least (doctors) on the receiving end &#8212; they thought they were much worse because of the attempts at the wound vac," Fang said.

For the jury-rigged system, doctors and nurses would pack wounds with gauze, put plastic over top of the wound, add a couple drain tubes and connect the tubes to a suction machine. The home-rigged system didn&#8217;t have alarms, sensors or meters. If it wasn&#8217;t working right, the wound could fill with fluid. Such a warm, moist environment could increase the risk for infection.

With the V.A.C. Freedom device approved for use on Air Force flights, Landstuhl doctors about a year ago wanted to start using the portable system on eligible patients. Stateside military doctors were still unsure if the wound vacuum system would be safe given their encounters with the jury-rigged systems.

The study &#8212; which will include 30 patients &#8212; was set to get under way last October, but in part because of improving conditions in Iraq, doctors are only halfway through the study now.

So far, comments from the medevac crews on the use of the V.A.C. Freedom system have been excellent, Fang said.

On a June 29 flight from Ramstein to Andrews, Air Force Maj. Bonnie Bosler, a flight nurse with the 514th Aeromedical Evacuation Squadron, tended to wounded Marine on a V.A.C. Freedom system.

"The system&#8217;s working great," she said. "This is three hours into the flight. The dressing looks very good. I don&#8217;t have any issues with it leaking or having seal issues."

Bosler&#8217;s recommendation is that sample V.A.C. Freedom systems be available on the ground for practice so medevac nurses know how to operate it before getting on a flight.

Early in the war, wound vac pumps were not allowed on flights, so coalition members who were wounded and required medical evacuation to the U.S. or Germany were not eligible for such treatment. Using ingenuity, crews outfitted some patients with jury-rigged wound vacuum systems that involved gauze, plastic, drain tubes and a suction machine.

The proper wound vac involves doctors cutting special sponges to fit patient wounds, placing the sponge in the wound and fitting a plastic cover over the sponge, then attacking a tube to suction fluid from the wound into a collection bin.

The V.A.C. Freedom device that is being studied by the Air Force for use on medical evacuation flights is slightly bigger than a brick and its carrying case comes with a shoulder strap.