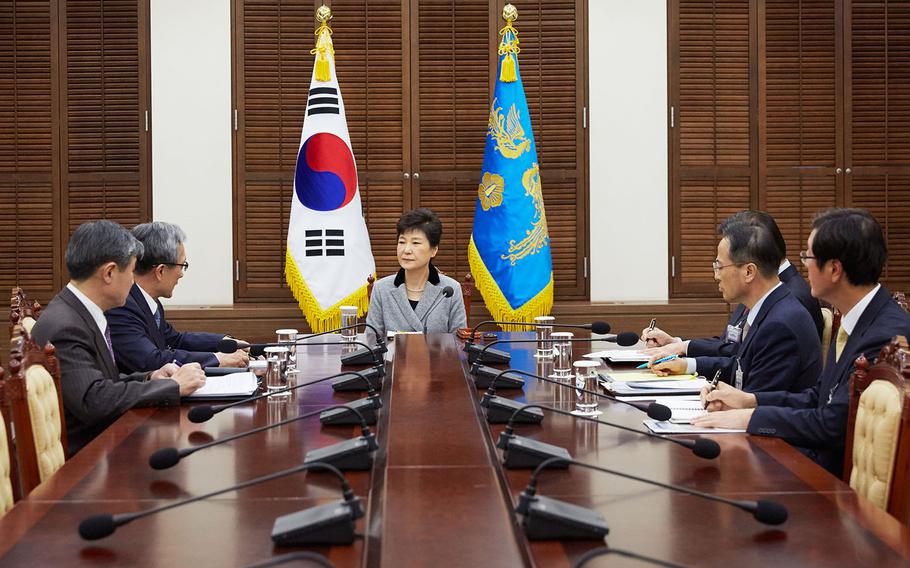 South Korea’s President Park Geun-hye receives a briefing from her National Security Council, which convened on Wednesday, Nov. 9, 2016, in Seoul to discuss the ramifications of the U.S. presidential election. (South Korean presidential office)

South Korea has closely watched the campaign because the stakes are high with North Korea aggressively pursuing its nuclear and missile programs.

While a victory by Hillary Clinton likely would have meant status quo for the Washington-Seoul alliance, Trump has said South Korea should be paying more for its own defense and said he might withdraw American troops stationed on the divided peninsula. He even has suggested allowing South Korea and Japan to develop their own nuclear weapons to reduce the U.S. defense burden.

Trump also denounced the free trade agreement between the two countries, calling it a “job killing” deal that might need to be renegotiated.

The president-elect tried to reassure U.S. allies in his victory speech, saying “I want to tell the world that, while we will always put America’s interests first, we will deal fairly with everyone.”

While government officials held meetings on the possible policy ramifications, many ordinary South Koreans were devastated by Trump’s victory.

“I woke up this morning thinking there’s no way that Trump’s gonna win this,” Park Lyanne, 33, said during an election-watch party organized by the U.S. Embassy at a hotel in Seoul. “You Americans are scaring me right now. I’m like, America, what are you thinking?”

Park, who is self-employed, said she was especially concerned about the uncertainty surrounding Trump’s foreign policy as well as his views on women and minorities.

Shin Ming-yu, a 21-year-old university student, worries it’s “the beginning of isolationism” in America, adding that South Korea needs to adapt to the new realities.

“In order to survive … Korea needs to realize how America’s strategy is changing and make a more sophisticated decision of its own in negotiations with the U.S. military, trade and so on,” he said.

U.S. Ambassador Mark Lippert said before the results were announced that the longstanding alliance between the two countries will remain intact, no matter who wins.

South Korean officials tried to put a good face on the situation.

Park sent a congratulatory message to Trump and Vice President-elect Mike Pence. “She expressed her hope to continue to further reinforce bilateral cooperation between Korea and the United States in order to address pending issues, including the North Korea issue, as well as to strengthen the ROK-US alliance,” her office said.

Foreign Minister Yun Byung-se said Trump and Clinton had both shown they understand the severity of the threat from North Korea, which has conducted two nuclear tests and several missile launches this year.

“In particular, candidate Trump has mentioned the importance of South Korea-U.S. alliance and his campaign has done so,” he said before the final results were announced, according to the Yonhap news agency.

Choi Hyungman, a 78-year-old retiree, is worried about his stock portfolio as the nation saw shares plunge on the news.

He blamed his country’s own political scandal for swaying Americans against Clinton. Park is accused of allowing a longtime confidante to wield undue influence over government policies and other decisions.

“Park Geun-hye is becoming a laughing stock around the world,” he said. “I think Americans didn’t vote for Hillary because they were afraid she is also likely to be a global object of ridicule.”