Eva Usadi, whose father, Jack Usadi, told her that he'd never truly shared what happened to him in World War II, speaks to a group of veterans and civilians at an event sponsored by Intersections International, a nonprofit group in New York. (Bill Murphy Jr./Stars and Stripes)

Eva Usadi, whose father, Jack Usadi, told her that he'd never truly shared what happened to him in World War II, speaks to a group of veterans and civilians at an event sponsored by Intersections International, a nonprofit group in New York. (Bill Murphy Jr./Stars and Stripes) 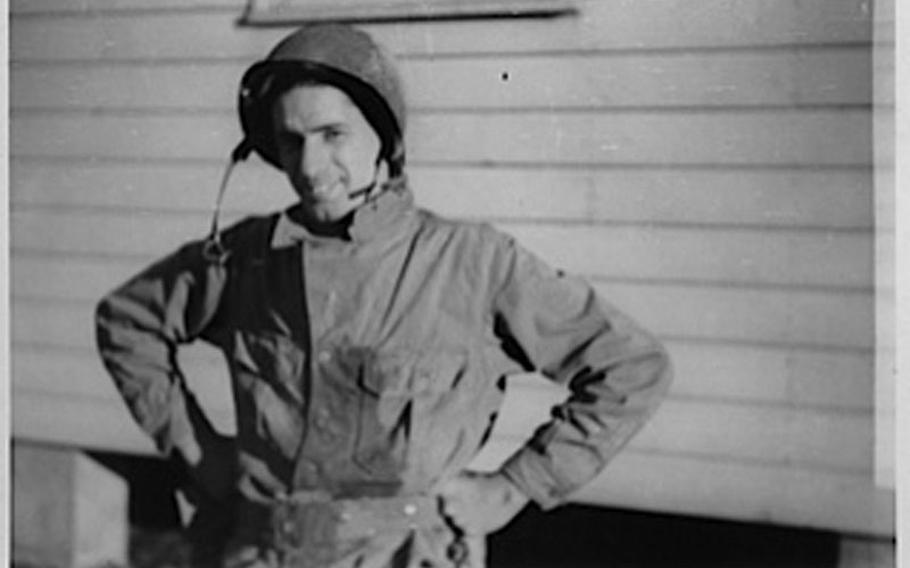 Jack Usadi talked often about his experiences in World War II, but it wasn't until he was near death that he told his daughter, Eva, that he had never shared his most traumatic experiences. (Courtsey of Eva Usadi) 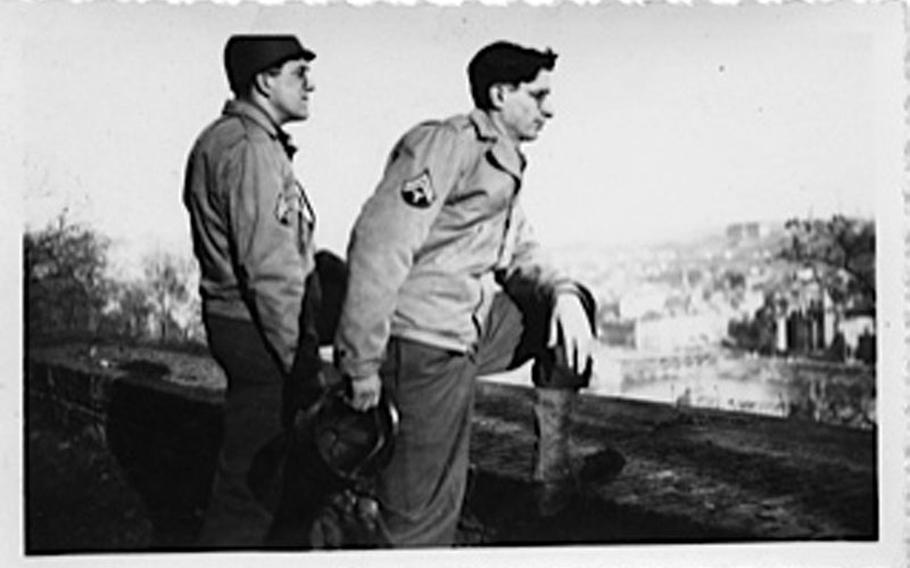 Jack Usadi, right, and an unidentified soldier in Europe sometime during 1944 or 1945. (Courtesy of Eva Usadi)

NEW YORK &mdash; Jack Usadi joined the U.S. Army in 1943 and served in the 3104th Signal Service Battalion in Europe. He came home afterward, graduated from law school at Columbia University, and started a family with his wife, Janna.

On the surface, he seemed to have left the war behind. He built a successful legal career that lasted five decades, raised a son and a daughter, had many friends. Still, Usadi never stopped talking about his time in the military. It got to the point that people tuned him out when he&rsquo;d tell the same stories over and over again.

His daugther, Eva, however, could tell how important it was for him to share what he&rsquo;d experienced. She kept listening.

Jack Usadi passed away in 2008. Not long before he died, he told Eva something that surprised her.

He died before he could find the words to explain. His words have stayed with his daughter ever since, and left her wondering what he meant.

THE THINGS THEY CARRY

Eva Usadi has a 27-year-old son now. She&rsquo;s a psychotherapist in New York &mdash; after stints as a forest firefighter and a machinist working on airplane engines &mdash; and she specializes in the treatment of trauma. She&rsquo;s counseled soldiers and families at Fort Drum, N.Y., and is starting a weeklong decompression program called Warrior Camp for troops trying to deal with their reactions to trauma.

On a rainy night in Manhattan last month, she joined about 60 people &mdash; a mix of civilians and veterans &mdash; at a sort of encounter group and informal therapy session run by a nonprofit called Intersections International. The event, one of a series, is designed to foster dialogue between those who have served in war and those who wonder what it&rsquo;s like.

Sitting first in small groups of six or seven, the veterans and civilians offered reflections on &ldquo;the things they carried&rdquo; as a result of war, a refernce to author Tim O&rsquo;Brien&rsquo;s collection of short stories about Vietnam. Combat veterans talked about what it had been like to fight; some of the civilians talked about their feelings of curiosity or guilt.

Eva Usadi had told herself beforehand that her goal was simply talk with veterans as a regular person, not as a therapist. But as she shared her story with the small group, she got choked up and grew tearful. She realized she was there for her father, hoping to learn what it had felt like for him to carry the wartime memories he&rsquo;d never been able to discuss.

Elsewhere in the room, a Vietnam-era veteran talked about his lingering resentment over the way he&rsquo;d been treated in the military decades ago. A Department of Veterans Affairs social worker said she was concerned about what happened to the veterans she worked with after they left her office. A veteran who had served on active duty but had never deployed talked about his feelings of guilt.

A few of the participants were then asked to address the entire group of 60.

Don Gomez, 29, served two tours in Iraq as an enlisted soldier, came home to go to college and is heading back to the military. He&rsquo;ll start at Army officer candidate school this month. He said he was there because he sought a place where people could remove politics from their discussion of war, however briefly.

&ldquo;You can yell at each other later,&rdquo; he said. &ldquo;We&rsquo;re all human, and it&rsquo;s important to connect as humans.&rdquo;

But it was Eva Usadi whose story seemed to have the most impact. She talked about her father, how he spoke so much about the war without telling what was most important to him.

She recalled that he&rsquo;d been at a Nazi concentration camp not long after it was liberated.

Eva&rsquo;s father had shared some of the letters he&rsquo;d written home from war with her, but after he died she cleaned out his home office and his closet. She went through his papers and documents. There, she found them all---hundreds of wartime letters, along with a daily diary he kept after he came home---running thousands of pages.

Some of the war letters are hard to read, not because of the content but because they were written by hand in minuscule script, or tapped out single-spaced on a mechanical typewriter.

Jack Usadi was not a combat soldier, per se. He served in the Signal Corps, usually a bit behind the front lines. Read some of his letters even now, and it can become easy to forget the context. Some of them go on for page after page, describing a baseball game or how he and his fellow soldiers warded off a swarm of bees.

At least one letter, however, addressed to Jack&rsquo;s brother Harry, makes the context clear.

Jack was in a group of soldiers who reached Buchenwald concentration camp, the largest Nazi camp in Germany, about a month after it had been liberated by the U.S. 6th Armored Division.

A Polish man who had been an inmate guided them through the camp, Jack wrote on May 19, 1945. After giving similar tours day after day for a month, there was no &ldquo;passion in his tone.&rdquo; He showed them the gallows, the crematoriums and the hospital where prisoners were subjected to medical experiments.

&ldquo;Offhand,&rdquo; Usadi wrote, &ldquo;he told us that when a prisoner died in their quarters they did not tell the guards to remove the body, but propped him up and took him along to the ration line so that they could get his daily ration of bread.&rdquo;

Even a month after liberation, &ldquo;there were plenty of Jews [still] in the camp,&rdquo; Usadi wrote.

He spoke to them in Yiddish. They told him horrific stories.

&ldquo;I have heard that released motion pictures &hellip; made at various German concentration camps &hellip; have dumbfounded the people at home. But the freed prisoners themselves say that no one can ever disclose the true story. It&rsquo;s simply too horrible.&rdquo;

All he could offer them was a little bit of chocolate and a few cigarettes, he wrote his brother. He wished them luck but it felt like an empty gesture.

&ldquo;What else could I say to them? I asked them where they would go and they said they didn&rsquo;t know. They had no homes nor families and many of them had seen their families wiped out &mdash; only because they were Jews.&rdquo;

Eva Usadi and her son are in the process of reading and transcribing her father&rsquo;s letters. Maybe they&rsquo;ll publish them someday. No matter how many words he wrote, she said she knows she&rsquo;ll never have the whole story.

But the facts are less important than learning more about who he was, she said. &ldquo;The not-saying that is so evident with so many combat veterans---that is the &lsquo;thing they carry,&rsquo; the story that is never told.&rdquo;