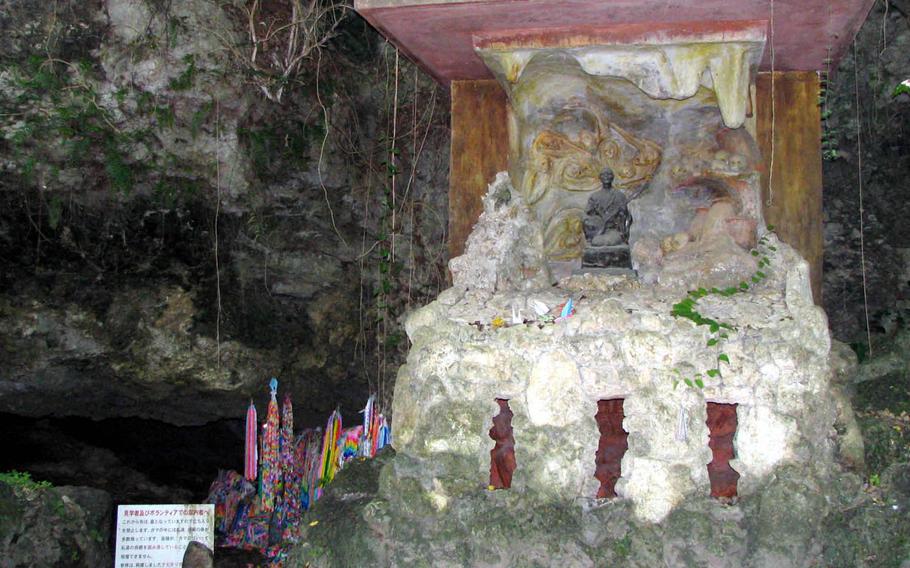 This file photo from 2007 shows the entrance to Chibichiri-gama, or "mass suicide cave," in Yomitan Village, Okinawa. (Stars and Stripes)

CAMP FOSTER, Okinawa — An Okinawa cave where 83 people were reportedly forced to commit suicide by Japanese troops as U.S. forces approached in the waning days of World War II has been vandalized, local officials said Wednesday.

The damage to Chibichiri-gama, or “mass suicide cave,” in Yomitan Village was discovered about 11 a.m. Tuesday by a local guide involved in “peace education,” Yomitan Village and Kadena police officials said. A wooden sign near the cave’s entrance was torn off, thousands of origami paper cranes were scattered and water bottles used by those who died had been smashed and scattered near their remains, which are still in the cave.

The vandalism was reported that afternoon by the head of a local survivors’ group, said police, who collected fingerprints that were being analyzed.

“I am speechless,” said Yasutomo Chibana, chairman of the Namihira district resident’s association in Yomitan Village. “Whoever did this is not a human being. Along with the survivors’ association, I am enraged thinking about the people who died [in the cave].”

Chibana called for the installation of metal fencing at the entrance. Japanese public broadcaster NHK reported that the cave has more than 10,000 visitors per year, mostly students on school trips as a part of peace education programs.