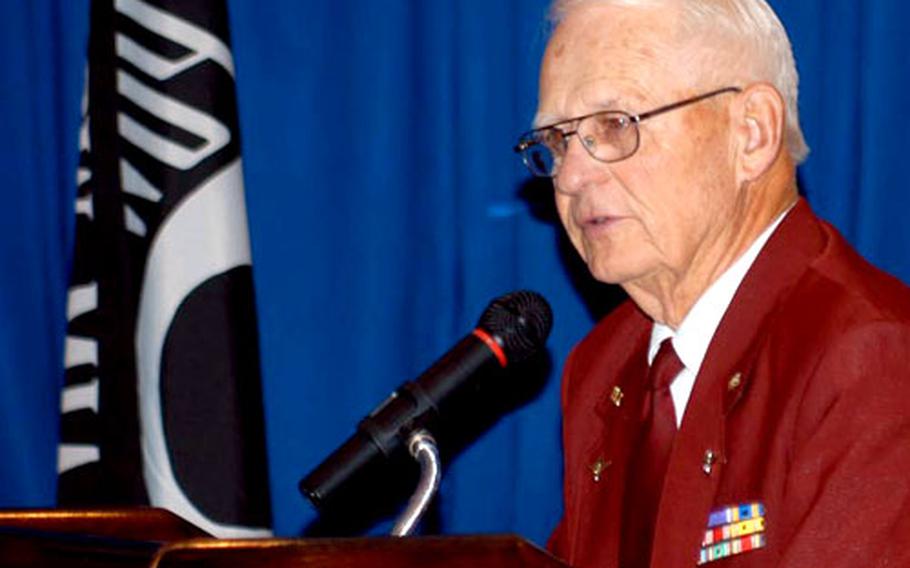 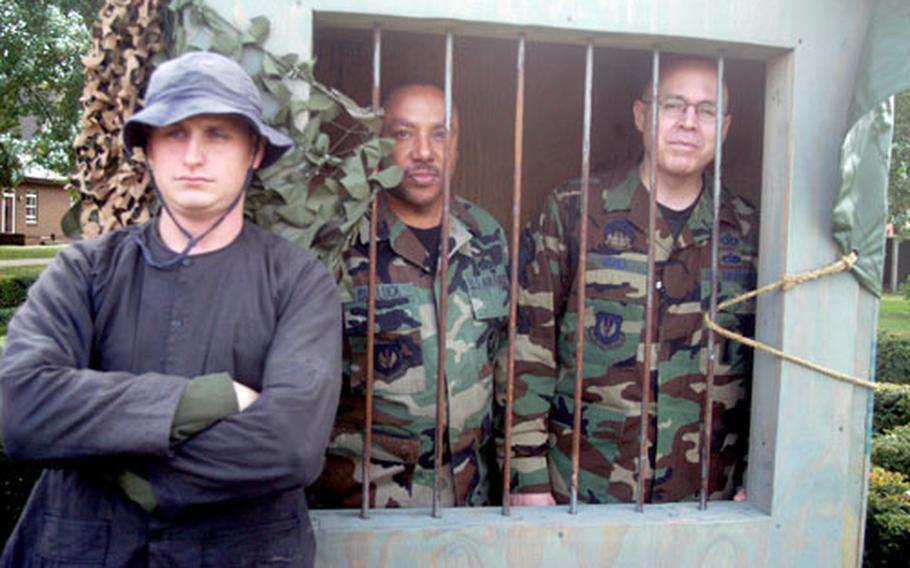 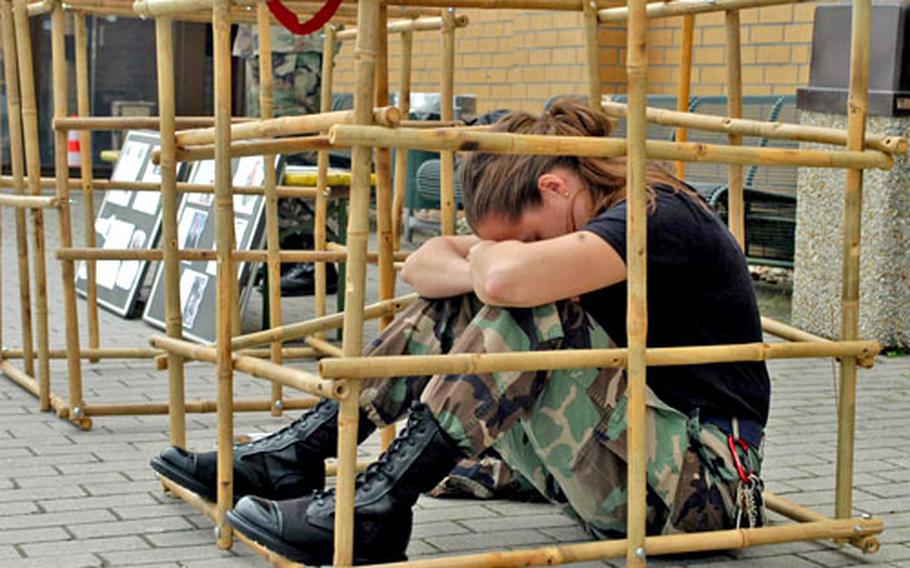 Airman 1st Class Brandy Hutchison, of the 469th Air Base Group medical clinic, diemonstrates how prisoners of war were held in tiger cages during the Vietnam War and by the Japanese in World War II. (Jessica Inigo / S&S)

Ball knows, because he was once a prisoner of war in Germany directly following the Japanese attack on Pearl Harbor. And he outwitted the enemy then.

In a straightforward talk about conditions and life as a 19-year-old World War II POW in Germany, where the guards weren&#8217;t &#8220;particularly abusive, but not particularly nice,&#8221; Ball helped the Air Force community on Rhein-Main Air Base understand the importance of National POW/MIA Day.

&#8220;I&#8217;ve got one front tooth because of the butt of a rifle,&#8221; Ball said, almost comically, during a POW/MIA luncheon Tuesday while explaining how the Germans treated the prisoners.

Ball&#8217;s speech was one of several activities going on around Europe to remember POWs and troops who are listed as missing in action.

Though Ball kept to the facts while relating life in a German POW camp, he ended the luncheon nearly in tears as he recalled how he and the rest of the 130,000 POWs held on to any shred of light to survive and keep from being in despair.

He painted grim pictures, but then spoke of how even the slightest bit of humanity kept him and others like him going. Little things, like singing carols through camp during Christmas; having a midnight Mass outside in knee-deep snow; or even sleeping with a B-28 pilot from Wisconsin to stay warm.

To beat the record winter cold of 1945, he and the pilot &#8212; whom he remains in touch with to this day &#8212; slept together on their two straw mats and blankets head to foot, with feet in each other&#8217;s armpits and hands between the thighs.

&#8220;I&#8217;m alive because of him and he&#8217;s alive because of me,&#8221; Ball said to the audience while wiggling his fingers. He said he still got frostbitten so bad that he can hardly move his hands or feet during each winter season.

Though Ball, wearing a burgundy Army Air Corps jacket complete with ribbons, made no specific reference to the men and women currently fighting in the war of terror, he did offer them advice.

During an interview prior to the luncheon, Ball, who is originally from Kansas but calls Denver home, said he believes the military&#8217;s mission has not changed much from when he served during World War II.

He relayed those feeling by telling troops during his speech to believe in their military training, always work together, and have heart and faith in something, even if it&#8217;s just the person you&#8217;re fighting next to.

Rhein-Main also had tiger cages on display at the base exchange as a visual representation of what captured troops were held in during the Vietnam War and by the Japanese in World War II.

Rhein-Main&#8217;s events ended with a retreat and wreath-laying ceremony at the base flagpole.