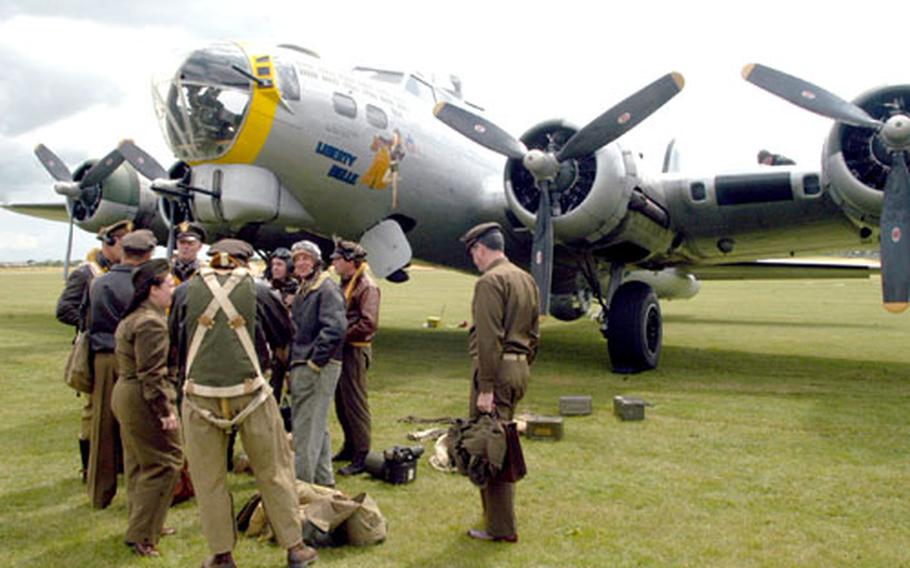 World War II re-enactors mingle Tuesday in front of Liberty Belle, a restored bomber. The B-17 traveled from Georgia to participate in an air show this weekend at the Imperial War Museum in Duxford, England. (Sean Kimmons / S&S)

World War II re-enactors mingle Tuesday in front of Liberty Belle, a restored bomber. The B-17 traveled from Georgia to participate in an air show this weekend at the Imperial War Museum in Duxford, England. (Sean Kimmons / S&S) Inside the front gun turret of Liberty Belle as she makes her way toward the American Military Cemetery at Madingley, near Cambridge, England, on Tuesday. (Sean Kimmons / S&S) A P-51 Mustang flies alongside Liberty Belle during her flight Tuesday over the American Military Cemetery at Madingley, near Cambridge, England. (Sean Kimmons / S&S) 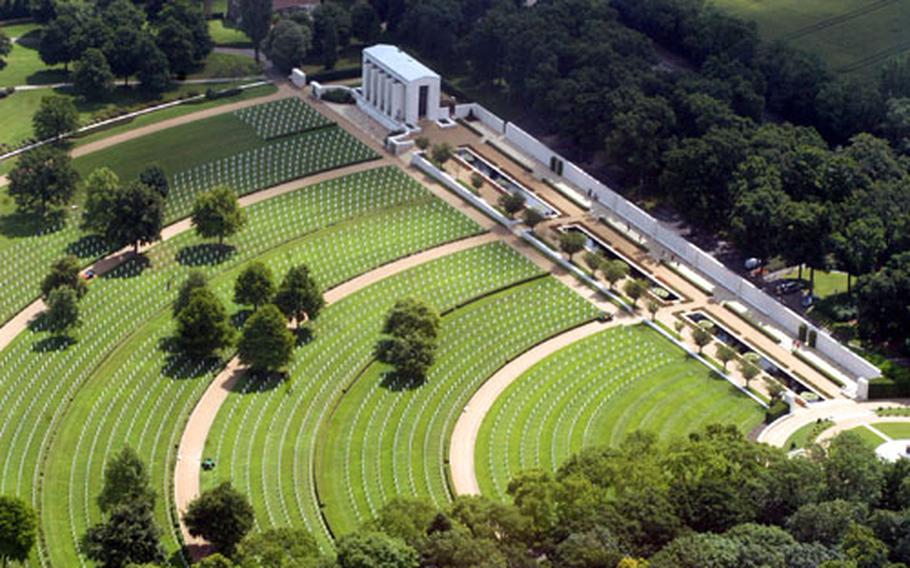 DUXFORD, England &#8212; Liberty Belle, a World War II B-17 bomber, landed smoothly on the runway and parked on a nearby grassy field overlooking the Imperial War Museum here on Tuesday.

"I see that you got it down in one piece," R. Kenning Hoddinott Jr. said jokingly as he walked up to the restored aircraft and shook hands with Air Force Capt. Ray Fowler, one of the pilots.

Hoddinott, 86, knows a thing or two about the bomber. In 1945, he piloted bombing raids above Germany with a similar B-17 based out of Lavenham.

And last week, he traveled with the Liberty Belle crew as it crossed the pond from Georgia to Duxford, where the B-17 is slated to join other historic aircraft in the Flying Legends air show Saturday and Sunday.

"It was cold as hell," he said of the 26-hour journey in the nonpressurized aircraft. He&#8217;s eyeing commercial air to take him back to the States next time around, he said.

On Tuesday, Fowler and his crew, flanked by a P-51 Mustang fighter plane, flew over the American Military Cemetery in Madingley to pay tribute to veterans killed in the war.

"It helps us be part of that history," Fowler said.

Before this weekend&#8217;s air show, the crew plans to fly over a few U.K. bases where B-17s were once stationed.

Hoddinott will join the crew and take the reins of the aircraft when it flies across his old stomping grounds in Lavenham.

Fowler, who also pilots F-16 fighter jets with the Air National Guard in Alabama, doesn&#8217;t seem to mind a short break from the modern jet.

The crew hopes to bring the B-17 back to England again, but money is an issue.

Sponsored by the Liberty Foundation, the aircraft cost $3.5 million to restore. Plus, it takes another $3,500 per hour to operate. For that reason, only 14 out of more than 12,000 B-17s made during the war are still able to fly.

For details on Duxford&#8217;s Flying Legends air show Saturday and Sunday, go to http://duxford.iwm.org.uk. For more information on the Liberty Foundation, check out www.libertyfoundation.org.