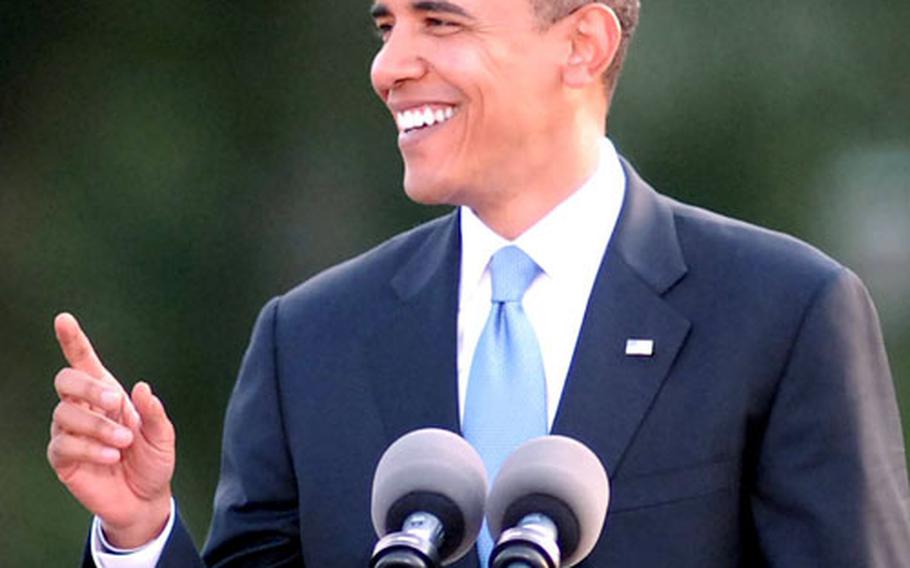 Sen. Barack Obama talks to an international crowd in front of the Victory Column in Berlin on Thursday night. (Michael Abrams / S&S)

Sen. Barack Obama talks to an international crowd in front of the Victory Column in Berlin on Thursday night. (Michael Abrams / S&S) 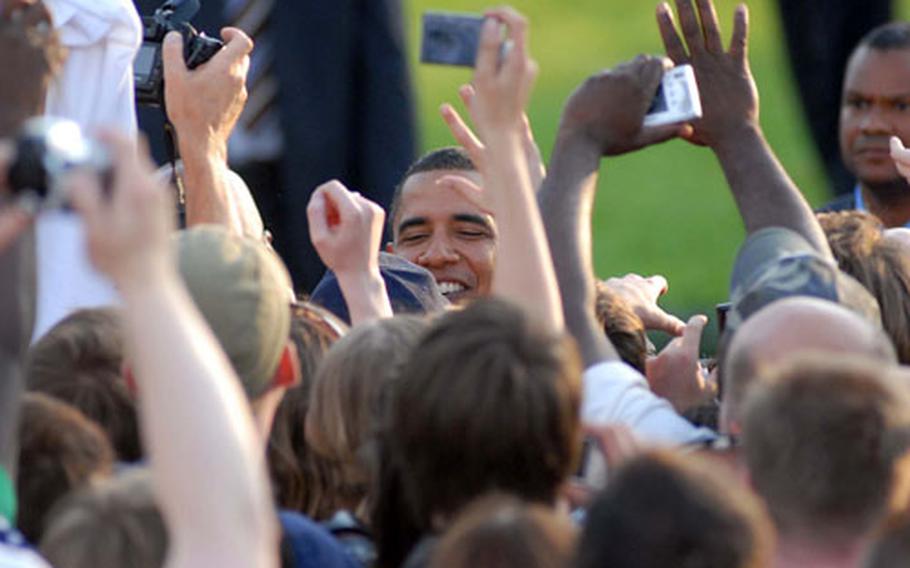 Everyone wants a piece of Barack Obama, following his speech to an international crowd in front of the Victory Column in Berlin. (Michael Abrams / S&S) 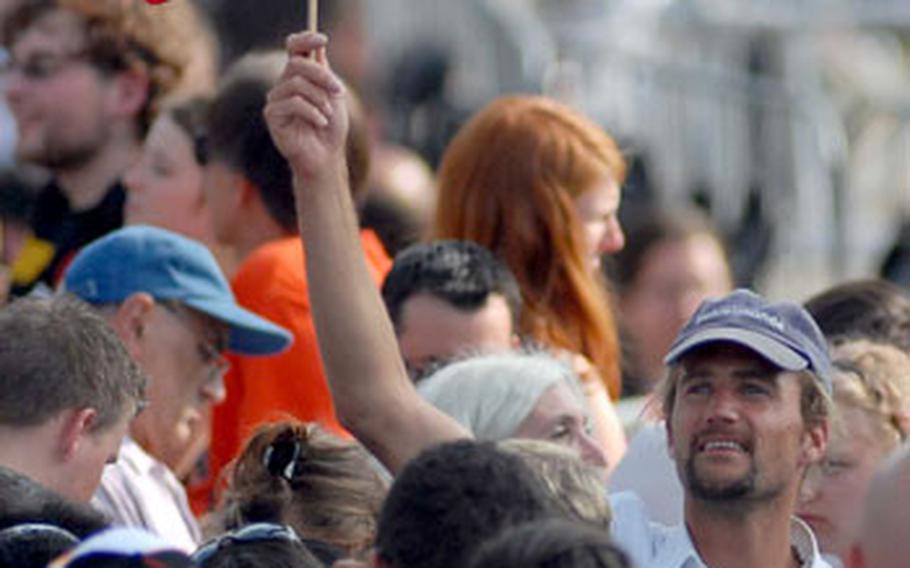 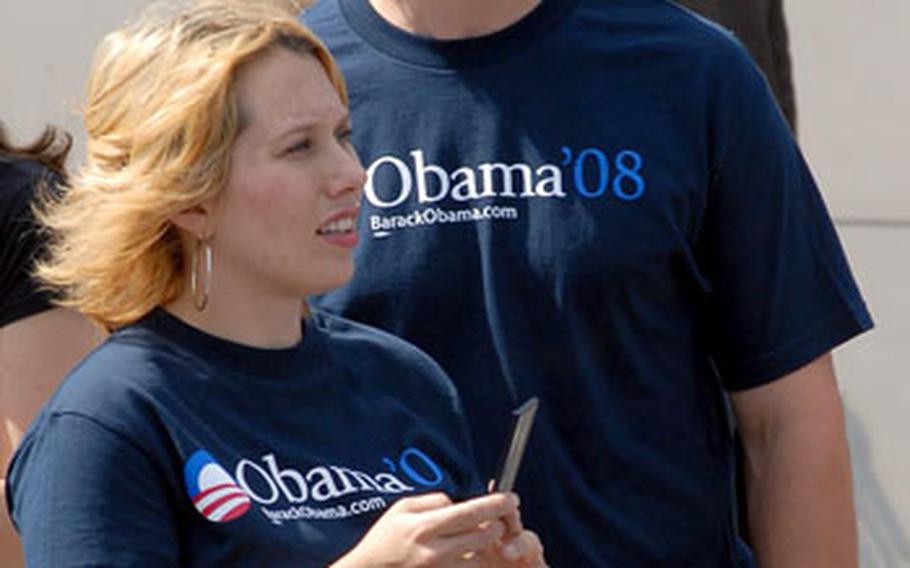 Supporters wait for Obama’s motorcade to arrive at the Chancellory building in Berlin. (Michael Abrams / S&S)

BERLIN &#8212; Sen. Barack Obama, speaking to an estimated 100,000 people, called on Europe and the U.S. to renew their alliance in order to defeat terrorism, ease global poverty and create a better world.

"People of Berlin &#8212; and people of the world &#8212; the scale of our challenge is great," he said. "The road ahead will be long. But I come before you to say that we are heirs to a struggle for freedom. We are a people of improbable hope. Let us build on our common history, and seize our common destiny, and once again engage in that noble struggle to bring justice and peace to our world."

Speaking for about 30 minutes in front of a column in Berlin&#8217;s Tiergarten dedicated to victory in war, Obama told the crowd that what had joined Germany and the U.S. after World War II was a mission of peace &#8212; the Berlin airlift.

It was a speech filled with historical references, starting with his own history.

"My mother was born in the heartland of America, but my father grew up herding goats in Kenya. His father &#8212; my grandfather &#8212; was a cook, a domestic servant to the British," he told the crowd. His father had dreamed of the promise of the West, he said, and attended college there.

"That is why I&#8217;m here. And you are here because you too know that yearning. This city, of all cities, knows the dream of freedom. And you know that the only reason we stand here tonight is because men and women from both of our nations came together to work, and struggle, and sacrifice for that better life," Obama said.

Obama discussed the Berlin Airlift, "the largest and most unlikely rescue in history," he said.

"The size of our forces was no match for the much larger Soviet Army. And yet retreat would have allowed Communism to march across Europe. Where the last war had ended, another world war could have easily begun. All that stood in the way was Berlin," Obama said.

Obama said the airlift, and later, the tearing down of the Berlin Wall, was instructive of how the U.S. and Europe needed to work together to combat new dangers.

"People of the world &#8212; look at Berlin, where a wall came down, a continent came together, and history proved that there is no challenge too great for a world that stands as one," he said.

"Sixty years after the airlift, we are called upon again. History has led us to a new crossroad, with new promise and new peril," he said.

"The fall of the Berlin Wall brought new hope. But that very closeness has given rise to new dangers," he said.

"No one nation, no matter how large or powerful, can defeat such challenges alone. None of us can deny these threats, or escape responsibility in meeting them," Obama said.

Choosing Berlin as the site of a major foreign policy address also had symbolic value. U.S. presidents John F. Kennedy, Ronald Reagan and Bill Clinton also made significant addresses in Berlin, now Germany&#8217;s most vibrant city and a capital with a long, historically significant &#8212; and visible &#8212; past.

Obama is very popular here. Surveys show that three-quarters of Germans want him to be the next U.S. president.

The presumptive Democratic presidential nominee, whose campaign got its start in Obama&#8217;s opposition to the Iraq war and his pledge to withdraw troops from Iraq within 16 months of taking office, Obama said earlier this week that although he would listen to U.S. commanders in Iraq, he&#8217;d make his own decisions regarding troop strength in Iraq and Afghanistan.

He has promised to send at least two more brigades &#8212; or some 7,000 troops &#8212; to Afghanistan, which he visited over the weekend. The Democratic senator from Illinois has said Afghanistan, not Iraq, is the priority &#8212; a change from Bush administration policy as well as the view of Arizona Sen. John McCain, the presumptive Republican presidential nominee.

He called on Germans to step up their efforts in Afghanistan.

"This is the moment when we must renew our resolve to rout the terrorists who threaten our security in Afghanistan, and the traffickers who sell drugs on your streets. No one welcomes war. I recognize the enormous difficulties in Afghanistan.

"But my country and yours have a stake in seeing that NATO&#8217;s first mission beyond Europe&#8217;s borders is a success. For the people of Afghanistan, and for our shared security, the work must be done," he told the crowd.