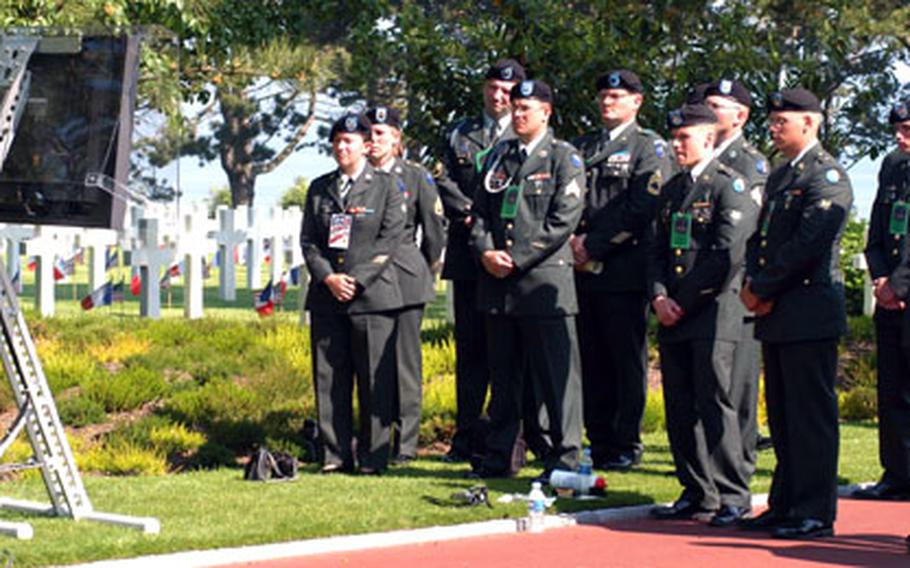 A group of soldiers watches President Bush speak at Normandy American Cemetery on the 60th anniversary of D-Day, on a TV monitor. For many of the thousands of spectators at the ceremony, this was the best view of the president and the event. (Michael Abrams / S&S)

A group of soldiers watches President Bush speak at Normandy American Cemetery on the 60th anniversary of D-Day, on a TV monitor. For many of the thousands of spectators at the ceremony, this was the best view of the president and the event. (Michael Abrams / S&S) With the Pointe du Hoc in the background, John Reville, a 2nd U.S. Ranger Battalion veteran, talks about the fighting at Pointe du Hoc on D-Day. (Michael Abrams / S&S) 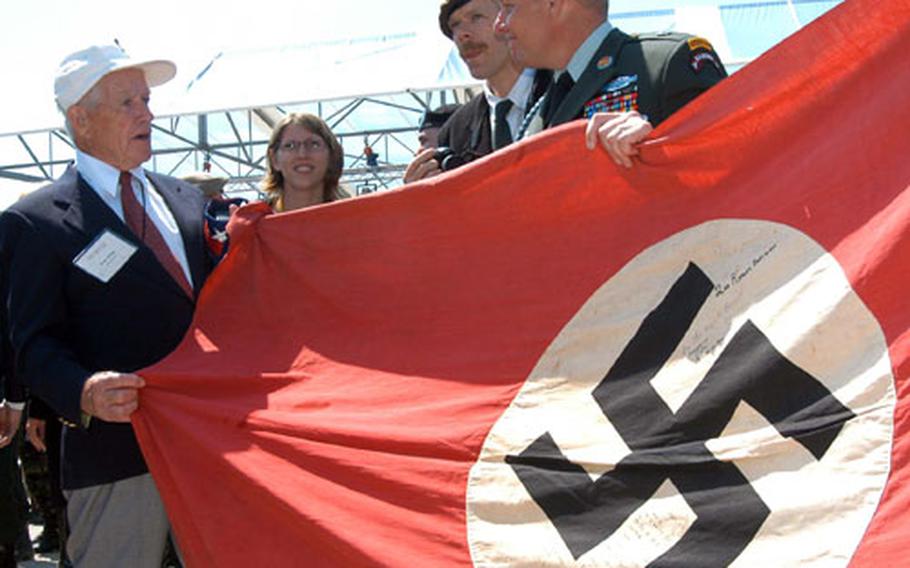 Ivor Jones, left, a 2nd U.S. Ranger Battalion veteran, holds a Nazi flag captured at Pointe du Hoc, as he talks to Rangers and visitors to the 60 anniversary of D-Day ceremony there on Sunday. (Michael Abrams / S&S) Pfc. Sarah Lutter of the 529th Military Police Company out of Heidelberg, Germany, gives a spent 105 mm shell to veteran Harry Cohen as a souvenir. The 529th passed out the shells they used at Sunday&#39;s 60th anniversary of D-Day ceremony at the Normandy American Cemetery, and the ones spent during rehearsal. (Michael Abrams / S&S)

OMAHA BEACH, France &#8212; At ceremonies Sunday commemorating the 60th anniversary of D-Day, President Bush paid tribute to the U.S. soldiers, sailors and airmen of World War II, &#8220;men and women who labored and bled to save this continent.&#8221;

Bush joined scores of dignitaries, hundreds of veterans and thousands of regular folks from around the world at the Normandy American Cemetery for a ceremony that both celebrated and eulogized the approximately 156,000 Allied soldiers who took part in the June 6, 1944, invasion. The invasion marked the beginning of the end of Adolf Hitler&#8217;s Third Reich.

&#8220;And those young men did. You did it,&#8221; the president told the vets in attendance, as the crowd rose to its feet and applauded.

French President Jacques Chirac, who spoke before Bush, joined the U.S. president on center stage for the 45-minute ceremony conducted under bright skies and tight security. During his speech, Bush noted that &#8220;France was America&#8217;s first friend in the world,&#8221; and later that America&#8217;s fighting forces laid down their lives for their allies.

After the invocation to open the ceremony, there was an extended moment of silence for those who fought and died during the Battle of Normandy and for former President Reagan, who died the day before at age 93. Bush called Reagan &#8220;a gallant leader in the cause of freedom.&#8221;

As the throng of dignitaries and visitors remained still, the sound of birds&#8217; chirping gave the scene a greater sense of serenity. The silence was broken by a 21-gun salute fired by an honor guard from the 529th Military Police Company from Heidelberg, Germany, and the playing of taps and the French and U.S. national anthems. The segment ended with a well-timed flyover of A-10 Thunderbolts based at Spangdahlem Air Base in Germany.

Immediately after the ceremony, the 16-member detachment from the 529th presented 105 mm shells fired from a vintage World War II howitzer to veterans in the crowd. The shells, about 250 in all, were from Sunday&#8217;s 21-gun salute and from test firings over the preceding weeks.

The cemetery sits above Omaha Beach, site of the bloodiest fighting on D-Day. The 172-acre cemetery is the final resting place of 9,386 servicemembers, most of whom died during the Battle of Normandy, an 80-day period that began with the D-Day landing on June 6, 1944.

The Americans hosted two other major ceremonies on Sunday: one at Pointe du Hoc and the final one at Utah Beach.

At Pointe du Hoc, the featured speaker was Army Chief of Staff Gen. Peter J. Schoomaker. He was joined on the dias by seven of the original Rangers who scaled the 100-foot cliffs on D-Day. The Rangers took that unconventional route to disable six 155 mm howitzers.

&#8220;What took place here 60 years ago, in many ways, is symbolic of the greater struggle engulfing our globe during World War II: an uphill climb against great odds, with numerous setbacks&#8221; that were overcome, Schoomaker said.

The ceremony was more intimate than the one at Omaha Beach, with current active-duty Rangers mingling afterward with their forerunners.

Many of them asked buddies to snap pictures of them with one of the veterans, such as 82-year-old Ivor Jones. One troop turned to thank Jones, but he turned the tables.

Later, Jones spoke about of the warm reception he and other veterans have received on their trip.

Standing nearby was Spc. Stephen Custred of the 2nd Ranger Battalion, out of Fort Lewis, Wash.