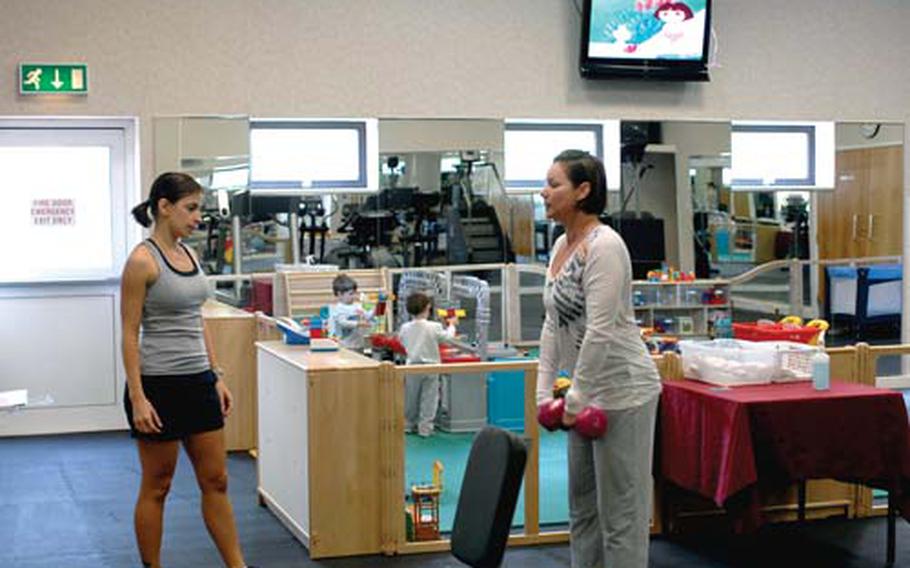 Anissa Haynes lifts weights as her trainer, Courtney Arnett, looks on. The PCA allows parents to work out and still keep an eye on their children. (Mark Abramson / S&S)

Anissa Haynes lifts weights as her trainer, Courtney Arnett, looks on. The PCA allows parents to work out and still keep an eye on their children. (Mark Abramson / S&S) 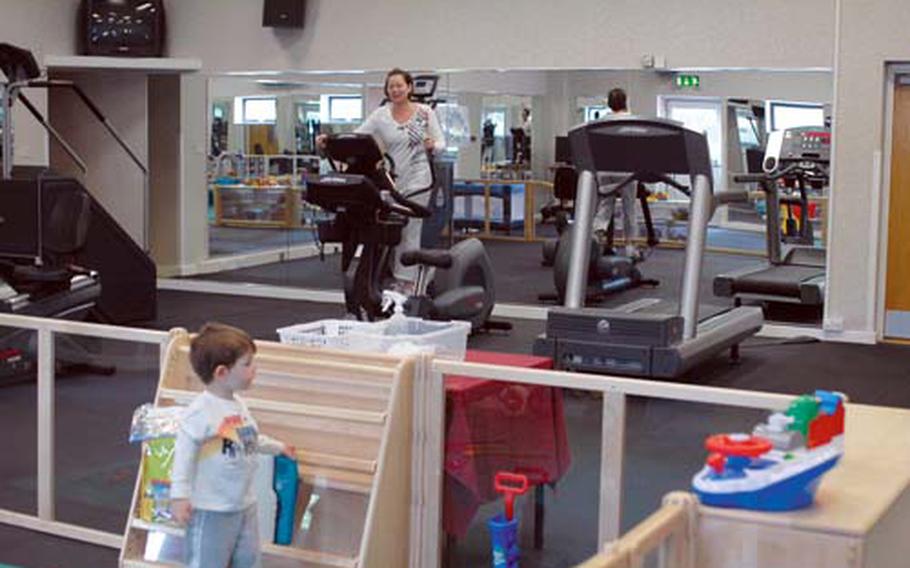 Parents have a new place at RAF Mildenhall to get in a good workout without worrying about who is going to keep an eye on their little ones.

The Parent Child Area in the base&#8217;s Northside Gym opened April 10 with the fanfare of a ribbon-cutting by the wing commander, Col. Eden Murrie. The area offers a playpen filled with toys such as three-wheelers to ride around on, a play diner complete with a two-seat booth, a handful of kiddie movies and other good stuff.

Children ages 2 to 6 can frolic there while their parents look on from the workout room&#8217;s treadmill, elliptical machine, stair climber or exercise bicycle or as they lift weights. There is also a flat-screen TV for watching their favorite American Forces Network shows. Meanwhile, parents can work out with the help of a personal trainer.

Before the area opened, Haynes said not being able to find day care often curtailed her plans to work out for an hour with her personal trainer, Courtney Arnett. Now she can work out in the PCA with her trainer.

The area is not cluttered with too much exercise equipment, so there is plenty of room for additions to meet future demand.

"I imagine that expansion is an option," said Tech. Sgt. Angel Rios, the noncommissioned officer in charge of fitness programs at the gym.

The concept of having a place where parents can work out and keep an eye on their children at the same time is gaining popularity, Rios said. It has already been done at RAF Lakenheath, Aviano Air Base, Italy, and several stateside Air Force installations, she said.

"I think it is something we see as a growing trend," Rios said. "I know Offutt (Air Force Base, Neb.) has a nice one."

Another plus of the PCA is that it is sandwiched between the men&#8217;s and women&#8217;s locker rooms, Rios added.

Although it is unclear how many parents will take advantage of the exercise area and when the most popular times of use will be, the base is letting people know about it via a mass e-mail along with word of mouth.

Rios said she would not be surprised if a lot of parents she sees going to the Southside Gym start showing up to work out at the PCA.

The tech sergeant said she hopes children not only have fun at the gym while their parents exercise, but that it shows them that working out is fun and their experiences there will encourage them to exercise when they get older.