Working hard on a relaxing resort spot at Garmisch 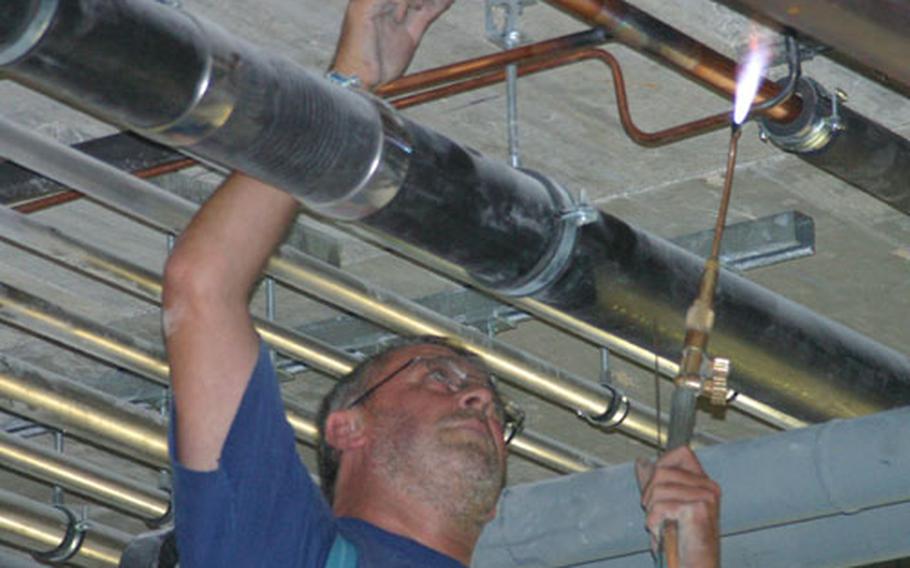 A worker solders pipes at the Edelweiss Lodge and Resort being built in Garmisch, Germany. (Courtesy of AFRC)

A worker solders pipes at the Edelweiss Lodge and Resort being built in Garmisch, Germany. (Courtesy of AFRC) 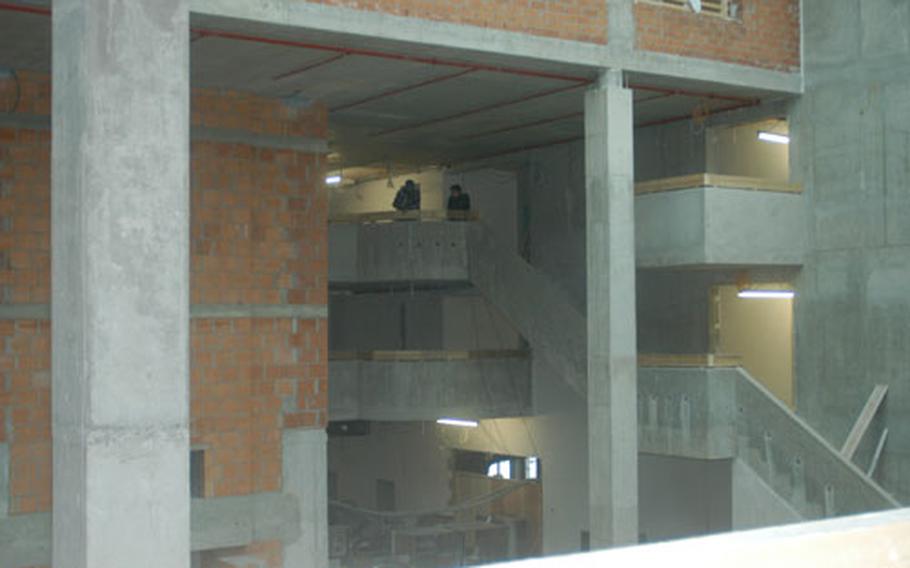 Two construction workers inspect progress made on the lobby of the Edelweiss Lodge and Resort being built in Garmisch, Germany. (Jessica Inigo / S&S)

GARMISCH, Germany &#8212; Under the dusty slabs of wood, cardboard boxes and piles of tile lies something worth $60 million.

Once construction is complete in September, the new Armed Forces Recreation Center in Garmisch will be a four-star resort with spacious rooms and lots of extras, according to Mark Hendryx, director of operations.

Complete with indoor pool and wellness club, conference center, and 330 guest rooms, the Edelweiss Lodge and Resort will replace the two smaller AFRC hotels in Garmisch.

Hendryx said one improvement will be the updated guest rooms. All will have two queen-sized beds, a work area, balcony, bathroom with larger showers and two sinks, and will be nearly twice the size of current rooms.

Hendryx also said the three themed eateries, similar to those at a Disney amusement park, will be nothing to scoff at.

Guests will be able to dine at a self-service marketplace restaurant, a full-service show kitchen restaurant or a casual bistro bar, all featuring ethnic food from around the world.

In addition there will be a conference center with a grand ballroom, 12 breakout rooms, an event terrace and a business area.

&#8220;This project uses no tax dollars and won&#8217;t take away from other [non-appropriated funds] projects,&#8221; Hendryx said last week of the multimillion dollar commercial loan used for the construction of the lodge.

Though the older hotels will be permanently shut down, their history, along with that of previously closed resorts Chiemsee and Berchtesgaden, will be saved through small memorials and design within the Edelweiss.

For example, the indoor pool area will have a nautical theme in remembrance of Chiemsee, according to Richard E. LeBrun, general manager of AFRC Europe.

&#8220;The most observant of guests will also notice we&#8217;ve cleverly incorporated some of the old art into the new resort,&#8221; he said, knowing how important the hotels have been to guests throughout the years.

When the new lodge and resort opens its doors and 330 rooms just before the next winter season, Hendryx said its customers will be impressed.

&#8220;These older hotels are quaint and hold a lot of history, but honestly, there is no way they can compete with the new facility,&#8221; he said.

Hendryx said the AFRC staff considered keeping one of the older facilities to continue a separate R&R program, but decided against it. Plans are in the works to make a Club R&R section within the Edelweiss Lodge and Resort for returning troops and their families.

&#8220;These troops deserve use of the new facility as much as any one else. We don&#8217;t want people thinking were sticking them anyplace but the best,&#8221; he said.