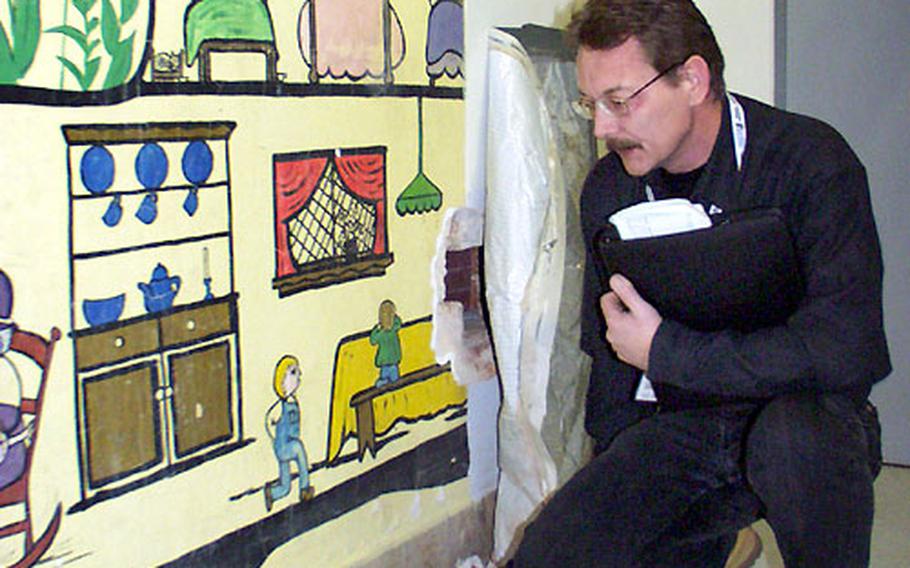 Thomas Zirkelbach, the German safety manager at Würzburg Army Hospital, said he believes a children’s mural recently discovered in a hallway dates from the late 1940s or early 1950s. The hospital has asked the German Assets Office in Nürnberg to send an expert to examine the painting. (Steve Liewer / S&S)

W&#252;RZBURG, Germany &#8212; The two German contract workers ripping out old telephone cables stared in disbelief at what they had uncovered in a second-floor hallway at W&#252;rzburg Army Hospital.

Behind a built-in cabinet attached to the wall decades ago, they uncovered part of colorful mural, painted in a Teutonic style and obviously intended for children.

The mural had been partly covered in white paint, but it showed an older woman spanking a child in her lap while another child runs away crying. Upstairs, several other children are asleep in their beds.

Roger Teel, the hospital&#8217;s public affairs officer, took an interest in the mural right after the workers&#8217; discovery in mid-November. He made sure it remained undisturbed and queried the city of W&#252;rzburg&#8217;s cultural office.

A local official said the city lacked the resources or expertise to determine the mural&#8217;s origin and suggested Teel contact the German Assets Office in Nuremberg. He is hoping the office will send an evaluator in January.

The hospital was built in 1937 for German soldiers and their families during the Nazis&#8217; massive prewar military buildup. The Americans took it over at the end of World War II.

Teel discovered that the hallway used to be part of the children&#8217;s ward under both German and American administration.

He talked to quite a few of the older German employees but found none who could remember the mural or when it was built. He&#8217;s intrigued with the idea that it could be a relic from the Third Reich.

Thomas Zirkelbach, the hospital&#8217;s German safety manager, noted the picture shows a teddy bear as well as a little boy wearing blue coveralls. But, he said, neither denim nor stuffed bears were common in Germany until after the war.

The nursery rhyme that appears to be the subject of the tale is not well-known in Germany, Zirkelbach said.

According to several Web sites, &#8220;The Old Woman Who Lived in a Shoe,&#8221; originated in 17th- or 18th-century Britain. Like most Mother Goose rhymes, it is believed to have been an English drinking song that may have been a political allegory about King George III and his colonies. In any case, it seems an unlikely subject for even a children&#8217;s painting by the ultra-nationalist Nazis.

It will be hard to know for sure, though, until an expert examines it. Even then, it&#8217;s not clear what will happen.

The hospital lacks a budget for historic preservation, and saving an entire wall could be a difficult, expensive task.

That&#8217;s why Teel is hoping the German government will take an interest in the mural. He hates the thought of seeing it painted over or torn down.