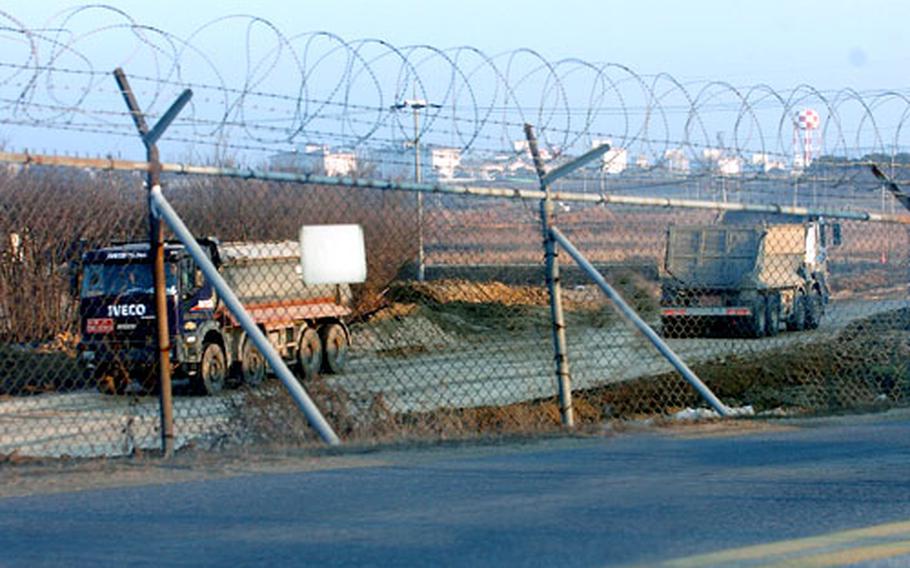 Trucks helping ready land for the eventual expansion of Camp Humphreys in South Korea move down a road outside the post’s perimeter fence Wednesday. Work has begun on the first portion of a 2,328-acre tract that will eventually be part of the expanded post, which will triple in size to become the U.S. military’s flagship installation in South Korea. (F. Neil Neeley / Courtesy of U.S. Army)

Camp Humphreys in Pyeongtaek is scheduled to triple in size, expanding onto a 2,328-acre tract of nearby land, under a South Korea-U.S. agreement. The post is to become the U.S. military&#8217;s flagship installation, housing most of its forces on the peninsula.

The first work on the new land is underway on the 203.6-acre portion known as Parcel 1.

Work crews have begun laying an access road so trucks can haul materials to and from the site, said Bart Mirabal, public works director for Area III Support Activity at Camp Humphreys.

Workers are to erect a fence at the site by next week, Mirabal said. Then they&#8217;ll clear the parcel of debris, vegetation and any other obstructions, he said.

The Seohee Construction Co. Ltd. of Seoul is carrying out the $29.7 million Parcel 1 project under contract with the U.S. Army Corps of Engineers.

Workers also will set up an elaborate network to drain off sub-surface ground water, said Fred Davis with the Corps of Engineers&#8217; Far East District Korea Relocation Programs Office. &#8220;The underlying material is very soft, kind of spongy, because of the amount of water in it,&#8221; he said.

The drainage system will consist of thousands of wick-like cellulose sections placed vertically into the ground every 12.9 square feet on the parcel, Mirabal said.

Crews then will blanket the parcel with gravel and overlay it with nine feet of compacted soil. Pressure from the soil will force the water up to the gravel bed and into drainage channels.

That process will proceed on one section of the parcel, then start on another, until all the parcel has been drained, Davis said.

As a section is drained, workers will cover it with landfill, which will be the foundation for building construction.

Landfill of Parcel 1 is set for November completion, Davis said, adding that construction there is to be completed by July 2008.

Once workers start laying the drainage blanket in February, truck traffic &#8220;will start picking up heavily,&#8221; Davis said &#8212; and will be even greater once the landfill portion begins in mid-March, with &#8220;hundreds of trucks per day&#8221; transiting the parcel in the peak.

Until May 2006, the lands had been the scene of violent, high-profile clashes between South Korean riot police and protesters who oppose the Humphreys expansion project.

But on May 4, the South Korean government deployed a large security force to wrest control of the lands from the anti-expansion protestors. The troops since have turned the area into a restricted-access military zone replete with obstacle belts including razor-wire barriers and water-filled trenches.

A contingent of those troops had been on Parcel 1 but moved elsewhere on the land on Jan. 12 to keep the area clear for the work crews, Davis said.

Troops will continue perimeter-security duty along the entire tract, officials have said.

The U.S. military is expanding Camp Humphreys as part of a larger U.S.-South Korean plan that will see U.S. forces eventually consolidate into regional hubs in Pyeongtaek and the Daegu-Busan region.