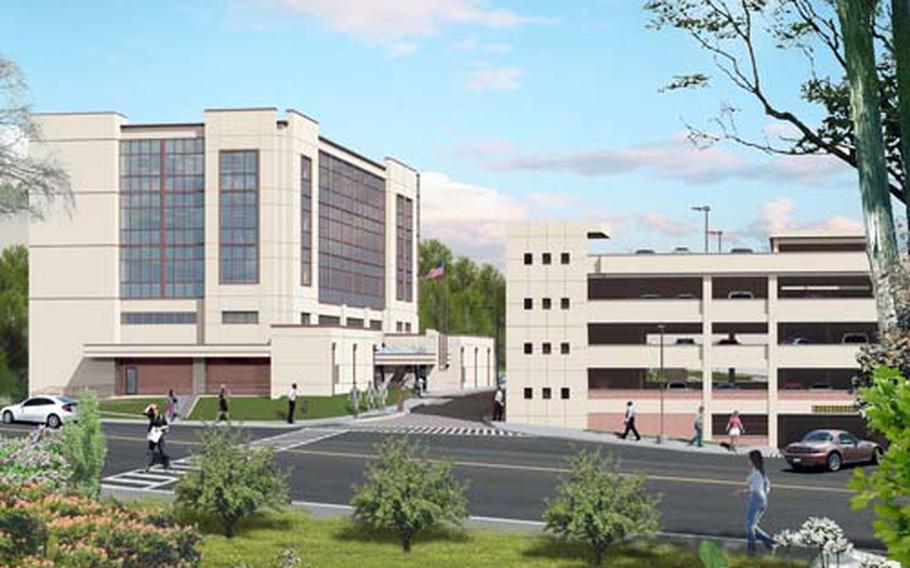 An artist’s rendering shows the building to be constructed as headquarters for the Army’s 35th Air Defense Artillery Brigade at Osan Air Base, South Korea. The project also calls for a five-level parking garage. The garage is slated for completion by September 2011, the headquarters by May 2012. (Courtesy of the U.S. Army)

OSAN AIR BASE, South Korea &#8212; An Army Patriot missile brigade in South Korea that&#8217;s run its headquarters out of a set of modified shipping containers for several years is getting a big new home.

Workers at Osan Air Base will take the first steps next week to build a new headquarters building for the 35th Air Defense Artillery Brigade.

The brigade headquarters and garage will be about a block from the base exchange complex and just a few blocks from several key operational centers that would play central roles in a war or other military contingency.

The Patriot brigade maintains eight missile-firing batteries at several points across the peninsula and plays an important role in the air defense of South Korea.

Until now, the brigade&#8217;s headquarters has been housed in a set of steel shipping containers that were welded together to create a two-story interim headquarters situated in relatively remote part of Osan. Some of its subordinate elements and equipment are elsewhere on base.

Workers over the next two months will raze three vacant buildings to clear room for the two new structures, Smith said.

The headquarters is slated for completion by May 2012. The 96,306-square-foot structure &#8212; huge compared with the barely more than 6,000 square feet of space the headquarters occupies now &#8212; will have five stories above ground and a two-story bunker below ground. It&#8217;s projected to cost $20.5 million, Smith said.

The garage is to be completed by September 2011 at an expected cost of $3.5 million, officials said.

The headquarters also will have room for the Army&#8217;s 3rd Battlefield Coordination Detachment, officials said.