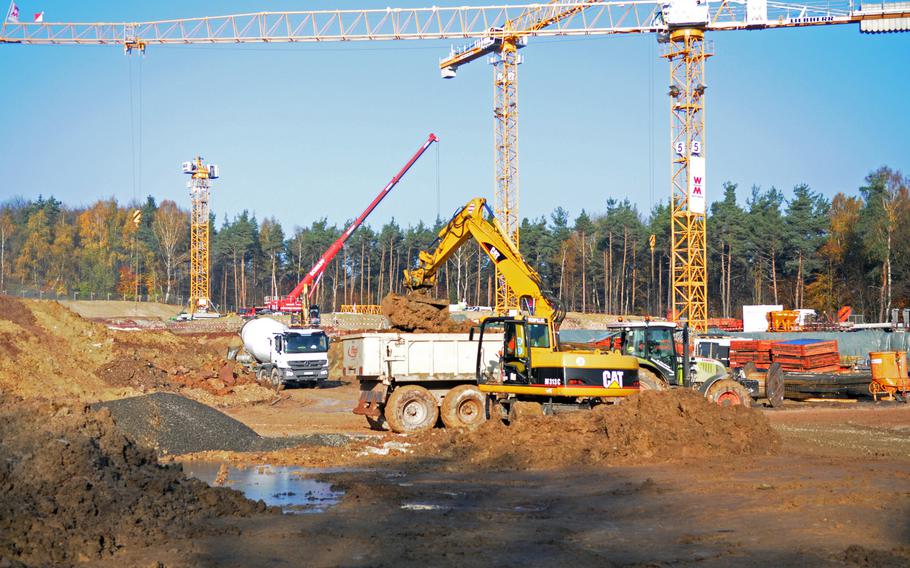 Buy Photo
Construction vehicles clear ground on the site of the new Stuttgart High School and Stuttgart Elementary School, slated to open for the 2015 school year. The schools are located in B?blingen, a suburban town just south of Stuttgart. (John Vandiver/Stars and Stripes)

Buy Photo
Construction vehicles clear ground on the site of the new Stuttgart High School and Stuttgart Elementary School, slated to open for the 2015 school year. The schools are located in B?blingen, a suburban town just south of Stuttgart. (John Vandiver/Stars and Stripes) 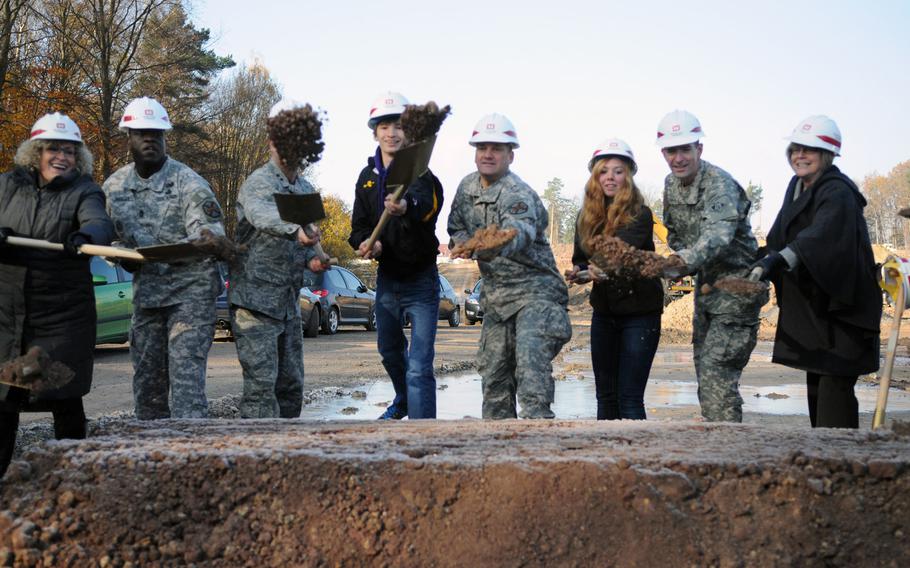 Buy Photo
Army officials from Stuttgart, the Army Corps of Engineers and students from Patch High School take part in the groundbreaking ceremony Tuesday at the site of the future Stuttgart High School and Stuttgart Elementary School. (John Vandiver/Stars and Stripes)

STUTTGART, Germany — Construction is under way on the new Stuttgart High School and Elementary School, a nearly $100 million project to be finished in time for the 2015 school year, military officials said on Tuesday.

“Work is going on and I like the sound of those big earth machines moving,” said Col. John Stack, garrison commander in Stuttgart, during a ground-breaking ceremony for the new schools.

The new campus, located near the Panzer training grounds in the suburban Stuttgart town of Boeblingen, will be connected to Panzer Kaserne via a new underground tunnel. The campus also will include new sports fields, a playground for the elementary school and greater information technology capabilities to bolster learning.

The new schools — years in the planning — also are expected to provide a much needed relief to the local community’s other school buildings , where overcrowding has long been a challenge.

The schools also are expected to alleviate some of the traffic congestion at an over-crowded Patch Barracks, the cramped headquarters of European Command. With the high school shifting to nearby Panzer Kaserne, more parking should free up on post, officials said.

“An added bonus is the needed breathing room at Patch,” Stack said.

Stuttgart High School is expected to accommodate about 650 students while the elementary school will support roughly 610. In all, the project covers a ground area of 27,555 square meters. Actual building construction adds up to 15,431 square meters.

The two new schools will likely reshuffle how schools in the Stuttgart military community are configured. While the definitive plans aren’t yet finalized, by 2016 Patch High School is expected to be converted into a middle school for all Stuttgart area children, according to the Department of Defense Education Activity Europe spokesman Bob Purtiman. That would mean Robinson Elementary and Middle School would revert to serving only elementary school students. Plans also are in the works to renovate Patch Elementary School with work tentatively slated to take place between 2015 and 2017.

During Tuesday’s ceremony, officials emphasized the need for the project to meet its completion deadline of the summer of 2015.

“We have to work as a team to keep this project on time,” Stack said.

Elizabeth Dunham, superintendent for the Department of Defense Education Activity’s Bavaria District, said the new schools will give students a sound environment for learning.

“We’re counting on all of you to make that magic happen here on the (construction) site,” Dunham said. “And in two years we will make the magic happen with the students.”