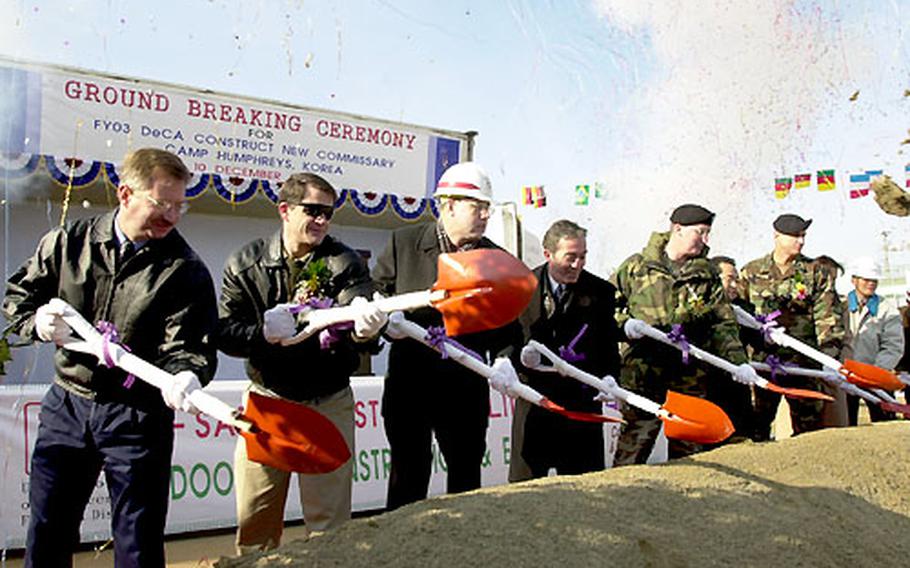 CAMP HUMPHREYS, South Korea &#8212; In anticipation of a rising base population, officials broke ground Wednesday on a new $6.9 million commissary that will dwarf the current store and be a centerpiece of the future U.S. military hub in South Korea.

The project is one of many under way at Humphreys and Osan Air Base, which have been cited as the new hub of the U.S. military under a realignment plan with the South Korean government.

Area III Installation Commander Col. Michael Clay called the commissary project an &#8220;investment in the future of our soldiers and the ROK-US alliance.&#8221; It will form the core of Camp Humphreys, which also recently got a new post exchange, youth center and lodging, Clay said.

Doosan Construction Company will build the commissary. Doosan vice president Shin Kil-soo said it&#8217;s a pleasure to help soldiers &#8220;who are carrying out their duties for the protection of freedom in the Republic of Korea.&#8221;

The new store will represent a significant quality of life improvement for soldiers, as commissary privileges are part of servicemembers&#8217; unpaid benefits, said Bruce Graf, Defense Commissary Agency Korea zone manger. The new store will have around 3,200 products, up from the current 2,000, Graf said.

Officials also broke ground Wednesday on two new barracks that will house 204 soldiers each. An 800-person dining facility will be built between the barracks. The three projects &#8212; costing $25 million &#8212; should be finished by February 2006, said Gloria Stanley, public affairs officer for the Corps of Engineers.

The projects mark an increasing investment in Camp Humphreys, situated on the edge of Pyongtaek, a small city about 40 miles south of Seoul. U.S. officials have said up to 7,000 soldiers at Yongsan Garrison could move in the coming years to the Camp Humphreys and Osan Air Base area.

Construction of a $24 million Army and Air Force Exchange Services mall is also underway at Osan.

U.S. and South Korean negotiators failed to reach an agreement last month on the fate of Yongsan during meetings between Defense Secretary Donald Rumsfeld and his counterpart Cho Young-kil.

The latest U.S. proposal calls for completely moving forces out of Seoul, while previous proposals kept two commands in the capital using a small slice of the 800-acre post.

The South Korean government has said a plan on moving Yongsan Garrison should be announced by the end of the year.

The U.S. Congress has committed to spending military construction money at Camp Humphreys, but only when the South Korean government completes a land purchase.