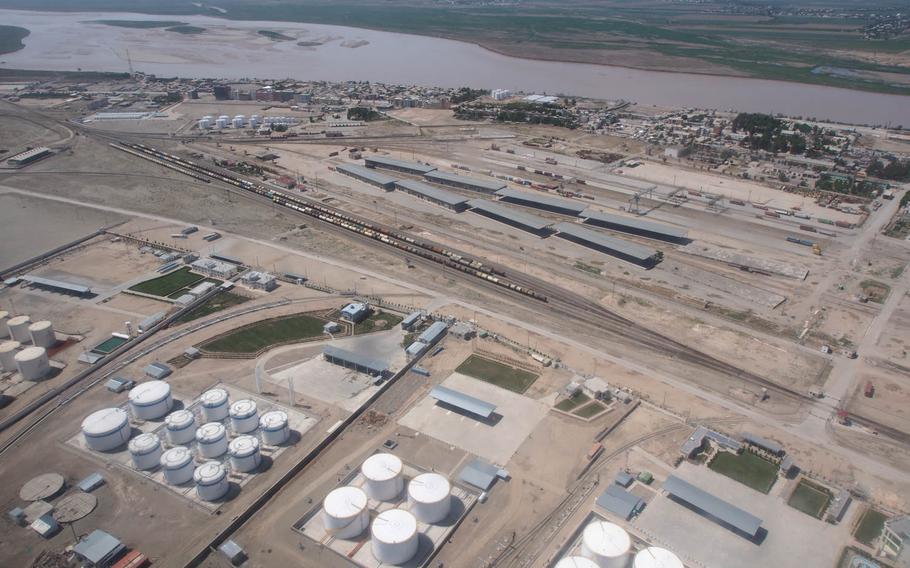 Buy Photo
The terminus of Afghanistan's only working rail line, on the Afghanistan-Uzbekistan border. Five U.S. soldiers make up a team that has been working with the Afghan government to improve their rail system, seen as key to the country eventually cashing in on its rich mineral deposits. (Heath Druzin/Stars and Stripes)

Buy Photo
The terminus of Afghanistan's only working rail line, on the Afghanistan-Uzbekistan border. Five U.S. soldiers make up a team that has been working with the Afghan government to improve their rail system, seen as key to the country eventually cashing in on its rich mineral deposits. (Heath Druzin/Stars and Stripes) Buy Photo
U.S. Army Capt. Donald Moyer points to an overhead view of Port Hairatan, a border crossing in northern Afghanistan key to both the Afghan economy and the international military coalition's efforts to bring materiel out of the country ahead of the Dec. 31 deadline for all foreign combat troops to leave. (Heath Druzin/Stars and Stripes) Buy Photo
The 47 miles of track in Afghanistan?s desolate north make up the entirety of the country's functioning railroad system. Improving and expanding rail is seen by many as crucial to the country's economic future. (Heath Druzin/Stars and Stripes) 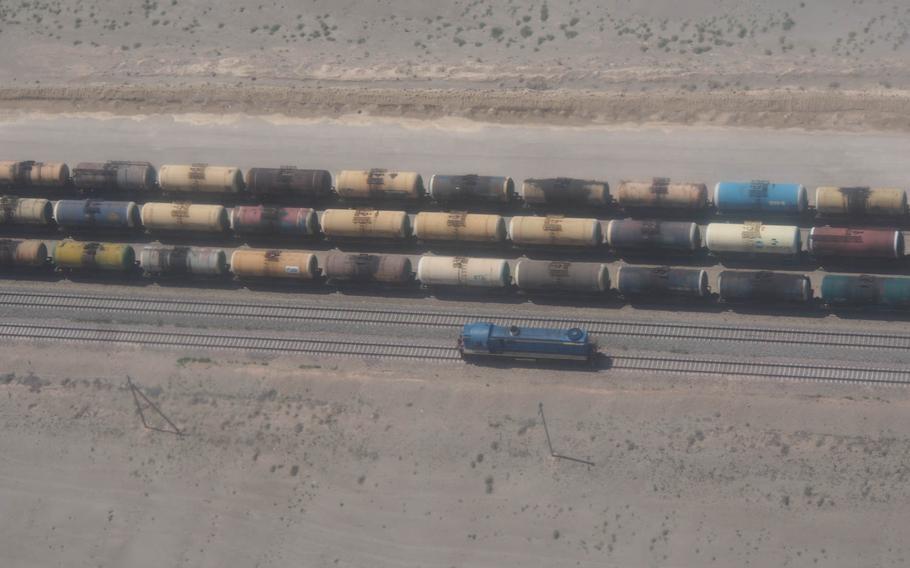 Buy Photo
Rail cars full of fuel wait to be offloaded at Port Hairatan, a key border crossing where a five-man U.S. Army team is advising the Afghan government on ways to improve both the country's rail system and its customs collection. (Heath Druzin/Stars and Stripes)

PORT HAIRATAN, Afghanistan — This is the end of the line for all trains in Afghanistan.

None had far to go, though. The entirety of the country’s working rail system is a single lonely track that runs for 47 miles, piercing a vast, desolate landscape of dust and dunes from the northern city of Mazar-e-Sharif to this river port on the Uzbek border.

If Afghanistan is ever to cash in on the estimated trillion dollars’ worth of mineral deposits in the country’s rugged mountains and bleak deserts, that mileage will need to grow exponentially. For now, it’s mostly U.S. and European military gear, not iron and copper, that is riding the rails north. This is part of the so-called Northern Distribution Network, which is a key transport route from Kabul to the Uzbek border and beyond. The route is used by the international military coalition, which is moving out materiel ahead of the Dec. 31st deadline for all combat troops to leave the country..

At a small military outpost next to the railroad’s terminus, near the banks of the wide, meandering Amu Darya river, a team of U.S. soldiers works to improve Afghanistan’s nascent rail system while monitoring operations at the border crossing. Roughly 80 percent of the fuel used by coalition forces comes into the country via the crossing, which is also the point through which much of the forces’ materiel leaves as the NATO-led International Security Assistance Force mission winds down.

Currently, ISAF moves 5 percent of its gear out of Afghanistan via the Northern Distribution Network, through Central Asia and Russia and onward to Europe. In 2013, about 40 percent of ISAF gear and fuel transited IN AND OUT via the route. Despite escalating tensions between the West and Russia over the crisis in Ukraine, Russia has not imposed any restrictions on that route, a NATO official confirmed.

Potentially more important is the backup the route represents if the up-and-down relationship between the U.S. and Pakistan sours once more. Last time that happened, Pakistan shut it’s borders to coalition traffic for seven months in 2011 and 2012, blocking the main route through Pakistan to the Arabian Sea that military forces were using to transport materiel in and out of Afghanistan.

“This gives us an alternative in case Pakistan closes” its borders, said U.S. Army Capt. Donald Moyer, part of a five-man rail team that has been working to teach Afghans how to maintain trains and tracks and develop comprehensive rail safety regulations.

The rail team’s mission is crucial to the international military effort in Afghanistan. Besides advising the Afghan government on all aspects of the border crossing, it deals with shipping and road traffic, as well.

While there is relatively little fighting in northern Afghanistan, one of the main missions for international troops stationed in Regional Command-North, which encompasses nine provinces, is keeping north-south road traffic flowing between Kabul and the Uzbek border, as well as protecting the railway, said RC-North deputy commander Marine Gen. Craig Timberlake.

“The Northern Distribution Network is still a focal point,” he said.

In addition to the rail line, the port is also the main entry point for goods coming down the river from Uzbekistan, such as wheat and grain destined for Afghan markets, and for trucks plying the highway from across Central Asia, which bring much of the fuel that comes into the country for ISAF. As important as the port is to coalition forces, it is also a lynchpin for the Afghan economy, and rail, in particular, is seen by many as a key to Afghanistan eventually standing on its own economically.

For now, Afghanistan must rely on Uzbekistan to run the country’s rail line, which means Afghan officials must request that Uzbek locomotives and cars, which ply both sides of the border. In addition, Uzbekistan still handles customs collections on the line for its neighbor. Moyer estimates that Afghan rail is still at least a decade away from being self-sufficient.

In their 10 months at Port Hairaton, the five rail team members say that while much has improved, it’s been challenging to get Afghans to buy into the concept of the railroad as part of an interconnected transportation system, instead of an independent entity. Their work has been slowed, too, by bureaucracy: Several ministries are trying to have a say about the future of Afghan rail.

“One of the issues is, everyone wants a slice of the pie,” said Master Sgt. Brian Hakey, a rail team member and locomotive engineer.

While Moyer and his team continue to work on improving rail safety and positioning the national railway to get an international certification that would bring it a step closer to independence, time is running out: When the team packs up in a couple of months, the Port Hairatan base will close and the team won’t be replaced.

“What we’ve trained (the Afghans) on is what they’re going to get,” Moyer said.