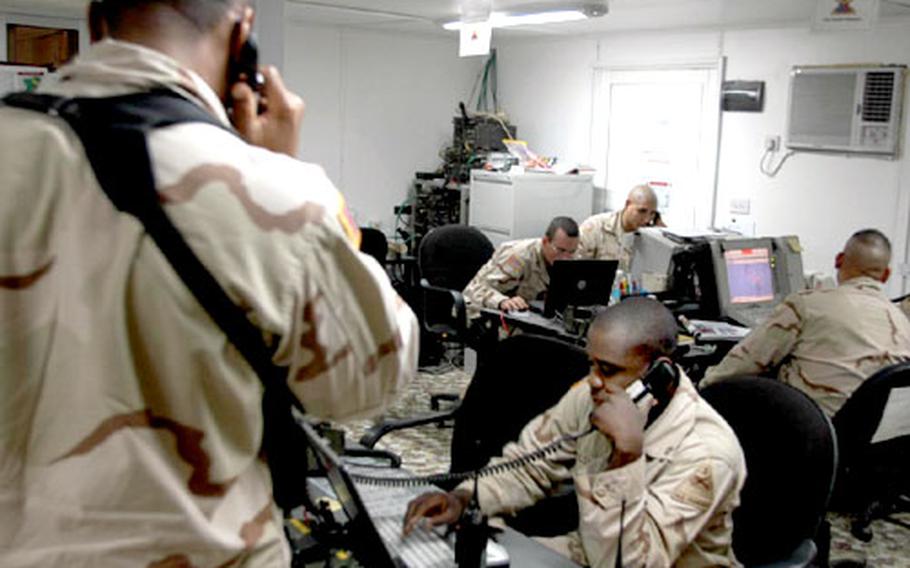 Soldiers of the 1st Armored Division&#39;s artillery brigade in Baghdad, Iraq, work their computers and radios seconds after the brigade&#39;s Firefinder radar detected the firing of what could have been an insurgent mortar round. The soldiers are on duty in the artillery tactical operations center at Baghdad International Airport. (Franklin Fisher / S&S)

BAGHDAD, Iraq &#8212; For the moment at least, in this long, white room filled with maps and soldiers sitting at computer screens, there was little hint that this place could unleash the destructive violence of an artillery barrage.

There were no howitzers or mortars to be seen in or near the one-story white shed that houses the division artillery tactical operations center of the U.S. 1st Armored Division in Baghdad.

But it was from inside this quiet room at the sprawling Baghdad International Airport that artillery officers would have a part in the swift, life-and-death decisions that lead to the division&#8217;s blasting suspected insurgent targets around Baghdad.

On this Monday night, the TOC crew was alert for the insurgent mortar, rocket or missile attacks that have become a daily part of Baghdad life. And as the soldiers waited, the division&#8217;s Firefinder radar picked up what may have been an insurgent&#8217;s round fired into the starlit night within a part of the brigade&#8217;s geographic area of responsibility.

What happened next took little more than a minute, with soldiers calling out data rapidly from their computer screens and others from radio handsets, a rapid crisscross of voices, each sounding off a part of the process.

&#8220;Red Rain! Red Rain! Red Rain!&#8221; the first soldier called out, alerting the TOC that the division&#8217;s Firefinder radar has detected the launch of a projectile &#8212; a mortar perhaps or a surface-to-air missile. Soldiers quickly swung toward their computer screens while others prepared for the information about to flow into the TOC by radio and computer.

Other voices crackled over the radio as troops from other parts of the division&#8217;s network called in their part of the mission.

The battle captain made eye contact with the operations officer and announced:

The process is well-rehearsed. Once the Firefinder detects a firing, several things happen at once.

The intelligence officer looks at the satellite mapping image of the location where Firefinder detected the firing. It appears immediately on his computer screen. Is there a hospital there? Private homes? Is it a vacant lot? He makes a quick decision whether it would be appropriate to fire on the location and judges it either &#8220;cleared&#8221; or &#8220;not cleared&#8221; for an artillery counterstrike.

Meanwhile, division troops at observation posts, checkpoints and elsewhere &#8220;on the ground&#8221; watch the area where the Firefinder&#8217;s computer has calculated the round will hit.

If they see rounds hit, it&#8217;s a sign to the TOC that the Firefinder has indeed detected a hostile launch. But if no rounds land, they radio that to Steel Main, and it&#8217;s passed to the battle captain and operations officer as &#8220;negative humint.&#8221;

Others contact the Baghdad air control tower so the appropriate section of airspace can be cleared of aircraft if necessary. Still others are in radio and computer contact with the howitzer batteries, which prepare their guns to fire, then stand by for instructions. And others are in contact with the ground troops in the area from which the round was fired.

The ultimate decision on whether to fire rests with the brigade commander who covers the area where the firing is detected.

Much of what the Firefinder has been picking up lately is small-arms fire in celebration of the Muslim holy month.

&#8220;They have their spurts,&#8221; Sgt. Justin Shelley said of the insurgents and others who fire weapons in Baghdad.

But Sgt. Sean Moment, 26, of Alexandria, Va., who works beside Shelley, recalled a recent night when Firefinder picked up a mortar launch and the division&#8217;s howitzers got the order to fire back.