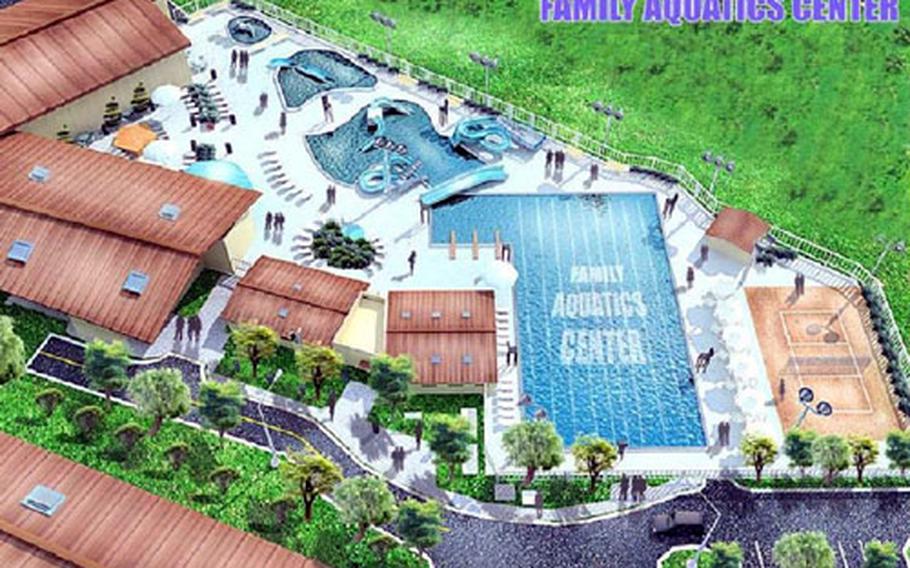 &#8220;We&#8217;re going to construct an environment where the family can go and, anywhere from being able to have competitions with the 50-meter pool, diving competitions, all the way into the little tots being able to have a splash pool and playgrounds,&#8221; said Tim Masters, construction representative with the U.S. Army Corps of Engineers&#8217; Far East District Pyongtaek Resident Office at Camp Humphreys.

Officials also are planning a new athletic field that will accommodate softball, soccer and flag football; the base&#8217;s Soldiers Field will be renovated and equipped for those three sports, Masters said.

At the aquatic center, soldiers and family members can spend time at a 50-meter, eight-lane competition swimming pool.

The volleyball court will have the same resilient flooring.

Also planned is a whirlpool spa of more than 10 feet in diameter.

The multipurpose field will consist of a conventional softball field with an outfield that also can be used for soccer or flag football. Electronic scoreboards, score booths, dugouts, accessways for the handicapped, and parking also are scheduled.

The Yojin Industrial Company Ltd. is carrying out the work under contract with the U.S. Army Corps of Engineers.

The aquatic center, slated for completion in June 2006, will be directly behind the base bowling alley and Nitewatch club, on the north side of the installation. It will cost more than $7 million.

The Soldiers Field renovation is to start in December and finish by June 2006. Upgrading the field, on the southeast side of the base, will cost about $2 million, Masters said.