Wood prices soaring, but shipmentsfor needs in Iraq not the only factor 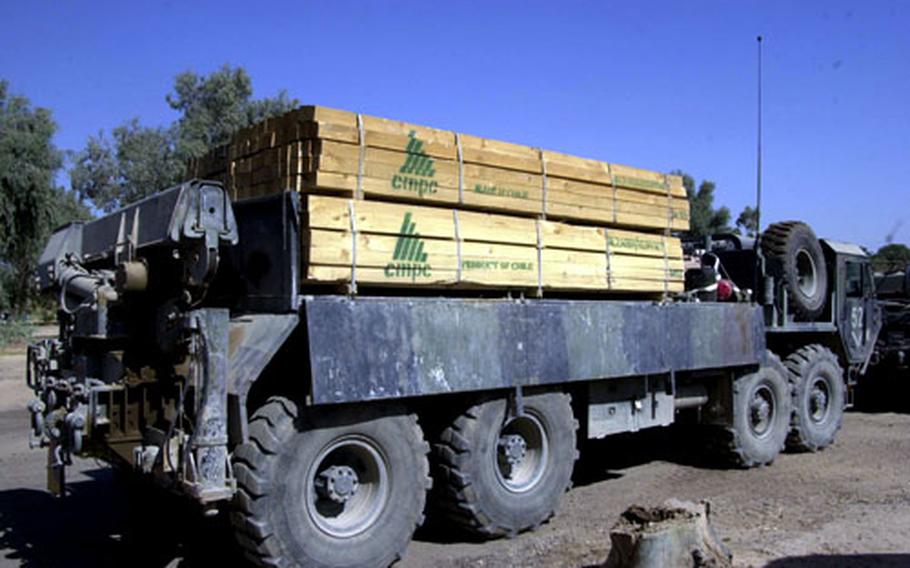 A military transport truck loaded with Chilean lumber sits at an Army base in Baghdad. (Jon R. Anderson / S&S)

A military transport truck loaded with Chilean lumber sits at an Army base in Baghdad. (Jon R. Anderson / S&S) 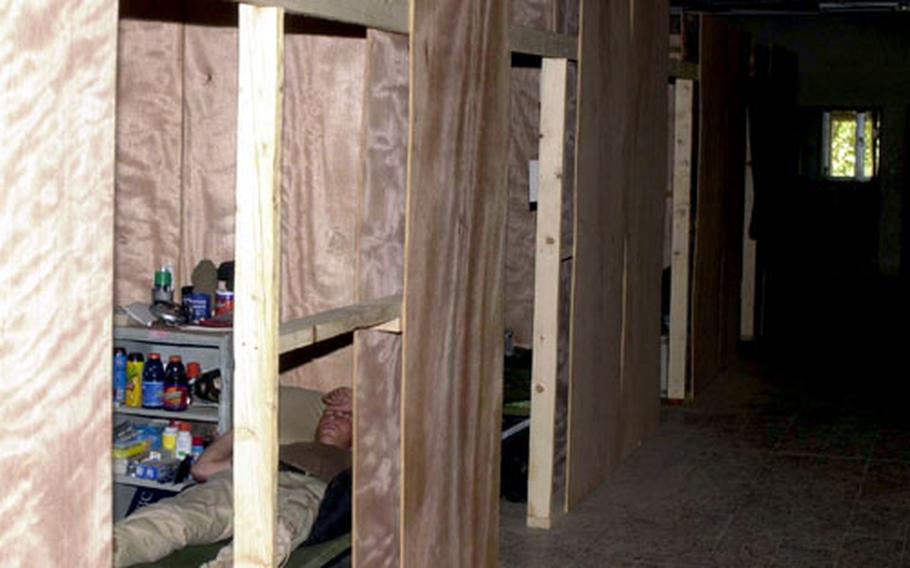 A fresh shipment of plywood allowed one 1st Armored Division platoon to create 2-man rooms inside the storage bay they were living in. (Jon R. Anderson / S&S) 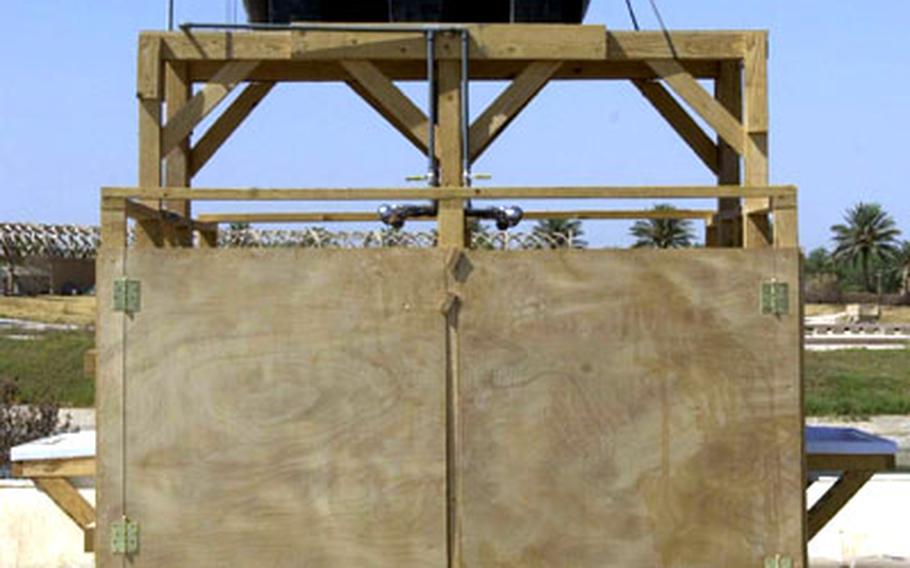 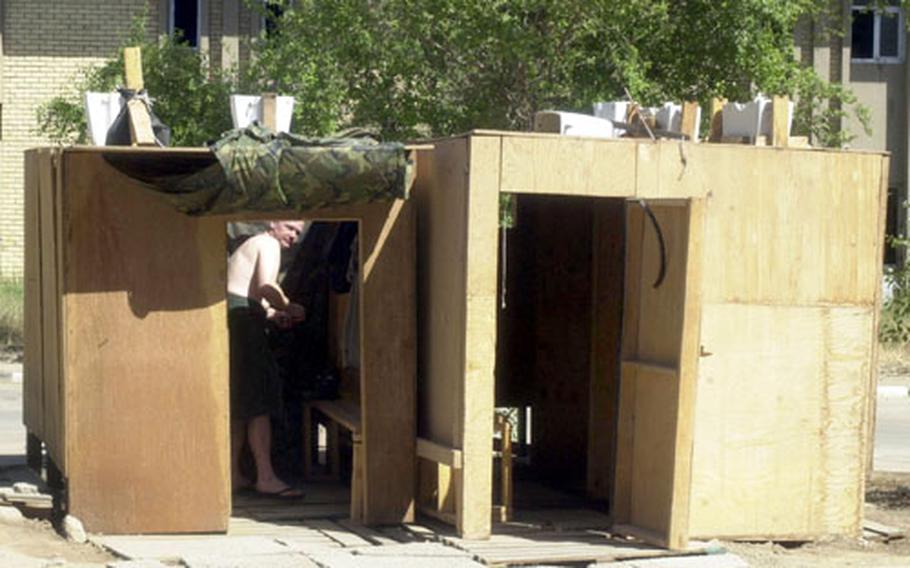 Troops are using wood for everything from tent floors to showers, such as this one at a base in downtown Baghdad. (Jon R. Anderson / S&S)

As the military purchases wood for construction in Iraq, plywood costs in the United States are soaring.

The higher prices are affecting home construction in the United States, and could be contributing to shortages among U.S. troops in Iraq.

The military&#8217;s appetite for wood is just one factor contributing to a plywood price hike during Hurricane Isabel last week.

Military and industry experts say other catalysts included rain in the South that made it difficult to stack plywood, fires in the West that burned into fir harvests, a spike in home construction during the summer and then Hurricane Isabel and the resulting demand for plywood to protect windows.

&#8220;You certainly can&#8217;t point to one factor and blame it all on that,&#8221; said Dawn Dearden, spokeswoman for the Defense Logistics Agency at Fort Belvoir, Va.

The agency will purchase $50 million worth of wood for the entire year, a $16 million increase over last year. Some suppliers blamed last month&#8217;s military purchase of 666,000 sheets of plywood for the price increase prior to Isabel&#8217;s smacking into the East Coast. Some of the order was part of the military&#8217;s normal purchase schedule, but a large amount was sent to the 1st Armored Division in Iraq.

Dearden said the wood was destined to be made into items such as tent floors and guard posts, but was not for the rebuilding of homes in Iraq.

Nonetheless, Carliner said the military purchase did have a &#8220;disproportionate effect on market psychology.&#8221;

All the factors, though, added $3,000 to the cost of building an average home. Carliner said he didn&#8217;t feel builders would raise their prices to the same degree.

The cost of an average 4-by-8 sheet of plywood has gone from about $9 in May to $18 currently, said Ron Jarvis, vice president of merchandising for lumber for the Atlanta-based Home Depot chain.

Unfortunately, prices for now are still going up. And even after the military&#8217;s recent wood purchase, troops are still scrounging for scrap.

Troops in Iraq use wood for everything from showers and outhouses to converting old Iraqi bunkers and storage bays into barracks and work spaces.

At some bases, wood is such a hot commodity that soldiers have torn apart loading pallets.

The supply lines are opening up, though.

When Sgt. 1st Class Michael Fletcher wanted to give his 1st AD troops a little privacy, he ordered 70 sheets of plywood and some framing lumber so they could carve out two-man rooms inside the storage area his platoon had moved into.

Not all the wood in Iraq is coming from American forests.

With little more than palm trees and scrub, Iraq offers little homegrown lumber. But Iraqi importers bring in wood by the truckload, and Uncle Sam is buying.

&#8220;Seventy-five percent of the wood we sell is for the American military,&#8221; said Radha Hussain Hassan, a manager with Haydar al-Khafaf, one of the five largest wood importers in Iraq.

Most of the wood sold in Iraq comes from Malaysia, Indonesia and South America and is imported through Jordan and Turkey. Plywood purchased in Iraq goes for about $12 per sheet, $6 cheaper than the price in America.

Sad Zaki, the manager of another major importer, said it is hard to say how much of the wood he sells is going to the military, but he knows most of the contractors he does business with are working on Army bases.

One of those Americans is 1st Lt. Steven Oliver, a logistics officer for the 1st Armored Division.

&#8220;Wood is a premium item here and we&#8217;re going through a lot of it,&#8221; said Oliver, a supply specialist with the 16th Armored Engineer Battalion at a base dubbed Bandit Island in northern Baghdad.

Most of the wood he gets comes through military supply channels, but none of it has come from the United States.

Because of the current shortage, the trend of buying foreign-produced plywood could also hit the States like an import Isabel.