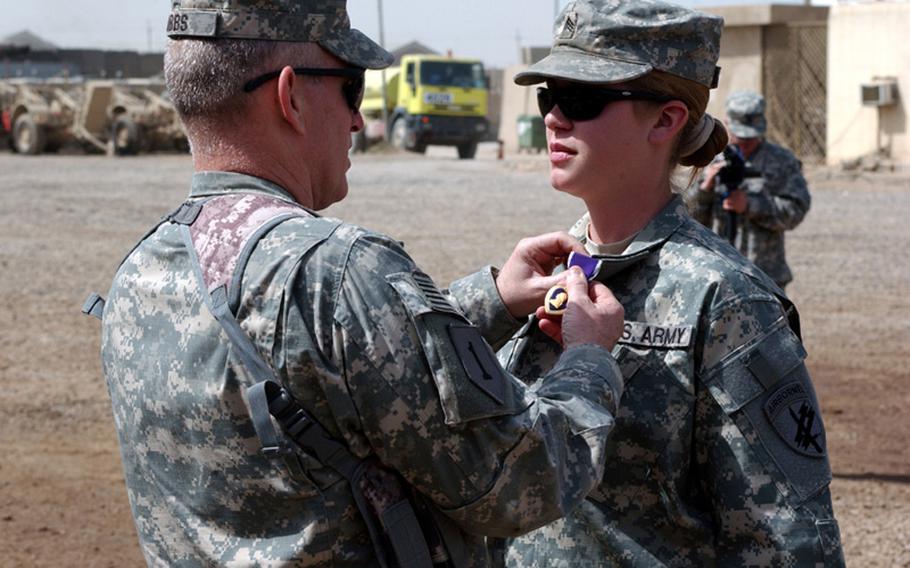 The combat exclusion policy puts women at a disadvantage and &ldquo;sends a clear message to the world that women are not capable of serving their country to the same extent as men,&rdquo; according to the federal lawsuit filed Tuesday in California.

Major Mary Jennings Hegar, a combat helicopter pilot in the California Air National Guard; Staff Sgt. Jennifer Hunt, a civil affairs soldier in the Army reserves; Capt. Alexandra Zoe Bedell, a logistics officer in the Marine Corps reserves; and 1st Lt. Colleen Farrell, an active-duty Marine air support control officer, are the plaintiffs in the suit, along with the Service Women&rsquo;s Action Network. They are represented by the American Civil Liberties Union, the ACLU of Northern California and the law firm Munger, Tolles & Olson LLP.

Hegar said she knew she wanted to be an Air Force pilot at a young age and has proven she can do the job.

&ldquo;The ability to serve has very little to do with gender,&rdquo; she said. &ldquo;It has everything to do with heart, character, ability, determination and dedication. This policy is a disservice to those women who put their lives on the line for their country.&rdquo;

All four women have deployed to Afghanistan, and two were awarded Purple Hearts. Hegar was awarded the Distinguished Flying Cross with Valor for her actions after her helicopter was shot down in 2009 during a casualty evacuation mission.

The lawsuit alleges that all the women&rsquo;s careers have been limited by the policy.

It also alleges that male and female Marines were put into more danger than necessary because of a policy related to the exclusion that required Female Engagement Team members to return to a main forward operating base every 45 days, instead of staying with the combat units they served.

&ldquo;To accommodate the policy, the women were forced to travel to and from the base on dangerous roads, and they were often taken out of crucial missions, sometimes for a week&rsquo;s time,&rdquo; according to the lawsuit. Bedell and Farrell served with FETs.

&ldquo;Rather than enforcing a merit-based system, today&rsquo;s military bars all women, regardless of their qualifications, from access to prestigious and career-enhancing assignments, positions and schools, and thus is directly responsible for making service women second-class citizens.&rdquo;

Pentagon spokesman George Little told reporters Tuesday that he did not want to comment on the pending lawsuit, but that Panetta&rsquo;s record on women in combat is &ldquo;very strong.&rdquo;

Earlier this year, the military opened about 14,500 positions to women that had previously been limited to men and lifted a rule that prohibited women from living with combat units. Panetta also directed the services to examine ways to open more combat roles to women.

Those changes are &ldquo;merely the beginning, and not the end of the process,&rdquo; Little said.

Women make up about 14.5 percent of the active-duty force; about 16,600 women are deployed in Afghanistan, according to Eileen Lainez, a Defense Department spokeswoman.