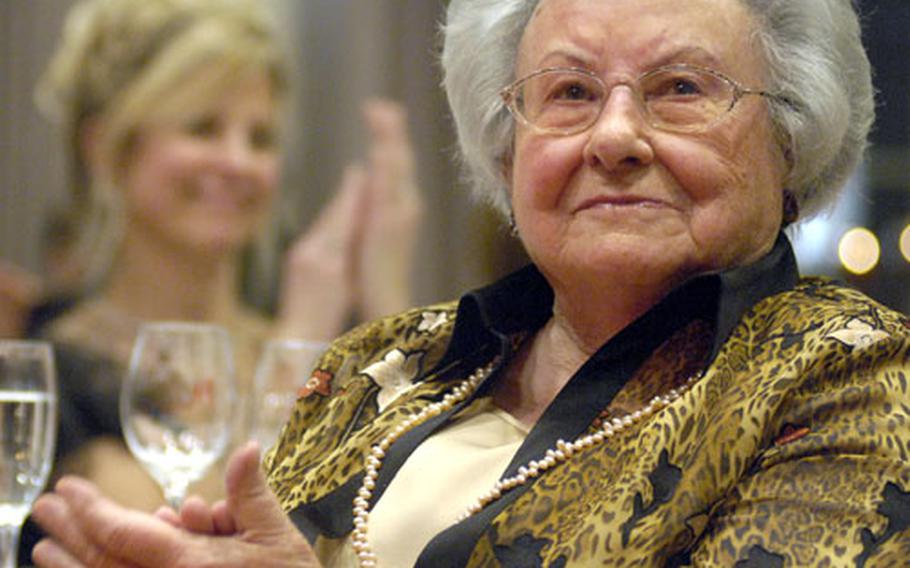 Gladys Fischer, a founding member and honorary president of the German-American Women&#39;s Club Heidelberg, reacts to a speech given by William Timken, the U.S. Ambassador to Germany, during a formal banquet Friday in downtown Heidelberg. (Ben Bloker / S&S)

HEIDELBERG, Germany &#8212; It started with efforts to help children in then defeated, starving Germany. But it might not have come together without a practical British woman who believed that her adopted country&#8217;s occupiers and its citizenry must make common cause.

&#8220;After six years of devastating war, it seemed the reasonable thing to try to get the former enemies together on a friendly basis,&#8221; wrote Gladys Fischer, founding member of the German-American Women&#8217;s Club Heidelberg.

Or at least their wives should get together.

They did, leading to decades of friendships, good works and cultural understanding.

The club celebrated its 60th anniversary on Friday, with Fischer in attendance, in a high-ceiling room near the Nekar River. There was music, food, 120 bottles of wine contributed by government of Baden-Wuerttemburg, and speeches, by club members as well as numerous important others.

Taking turns at the podium were, among others, a Heidelberg deputy mayor, an official from Karlsruhe, the U.S. Army Europe commander, and the U.S. ambassador to Germany.

All lauded the club for all it has done over the years.

The club, now with some 130 German members and 30 Americans, raises thousands of euros, provides scholarships and otherwise helps the poor who exist even in Baden-Wuerttemburg, one of the richest states in all of Germany, said Bernd Stadel, Heidelberg deputy mayor.

The club does so, Stadel said in English, while others &#8220;twiddle their thumbs or close their eyes.&#8221;

Stadel also made a pitch to keep USAREUR headquarters in Heidelberg, where it&#8217;s been for 60 years, instead of moving it as planned in a few years to Wiesbaden.

&#8220;You are very welcome here. We will do our very best to keep Heidelberg attractive as a [place for] U.S. headquarters in the future,&#8221; he said.

Gen. Carter Ham, USAREUR commander, did not address that issue but instead praised the club for helping Americans to &#8220;survive and thrive.&#8221;

William R. Timken Jr., U.S. ambassador to Germany, told the group in his speech that currently &#8220;the relationship between the U.S. government and the German government is the strongest that it&#8217;s ever been in history &#8230;&#8221;

That statement raised eyebrows among people who remembered Germany&#8217;s opposition to the Iraq war, the subsequent rift between the two nations &#8212; including a former U.S. Defense Secretary calling Germany part of &#8220;old Europe&#8221; &#8212; and the low approval ratings Germans gave President Bush.

But at the heart of the anniversary were the friendships among the women of two different cultures over all these decades.

The planned move of USAREUR headquarters to Wiesbaden has worried club members about the club&#8217;s future, even as wars and transformation have already had an impact.