Women in the spotlight at Mildenhall luncheon 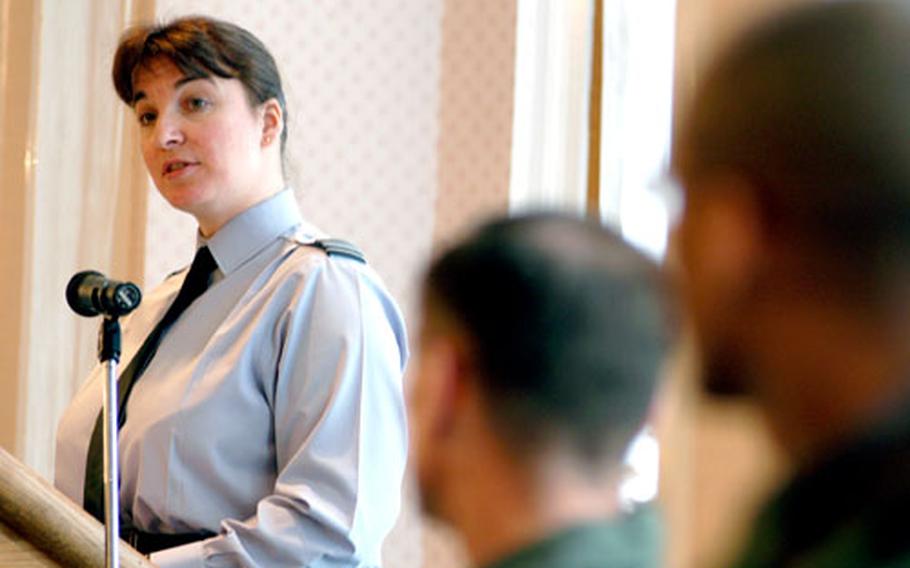 RAF MILDENHALL &#8212; &#8220;If you want anything said, ask a man. If you want anything done, ask a woman,&#8221; British Squadron Leader Jo Daniels, RAF Lakenheath commander, recited to the crowd at a Women&#8217;s History Month luncheon last month.

The quote from former British Prime Minister Margaret Thatcher sparked laughter from the crowd inside the Sterling Room at Middleton Hall.

More than 50 people gathered for the luncheon. Daniels asked the women in the audience to reflect on the accomplishments of women who strived for equal opportunity. From an Air Force standpoint, she told the women, &#8220;The sky is the limit.&#8221;

Daniels also added a local perspective to her remarks, using Thatcher &#8212; who was the first, and for two decades the only, woman to lead a major Western democracy, according to the Margaret Thatcher Foundation Web site &#8212; as a role model.

Thatcher played a key role in the collapse of the Soviet Union and attracted worldwide attention with the war against Argentina over the Falkland Islands in 1982, Daniels said.

For the luncheon&#8217;s closing remarks, Brig. Gen. Robert P. Steel, 48th Fighter Wing commander, said it&#8217;s really about the women today who shape society, not just women from the past.

Although some women may think their work goes unnoticed and unappreciated, Steel said it doesn&#8217;t.

65 percent of female citizens age 25-29 voted in the 2004 presidential election, higher than the 62 percent of their male counterparts.