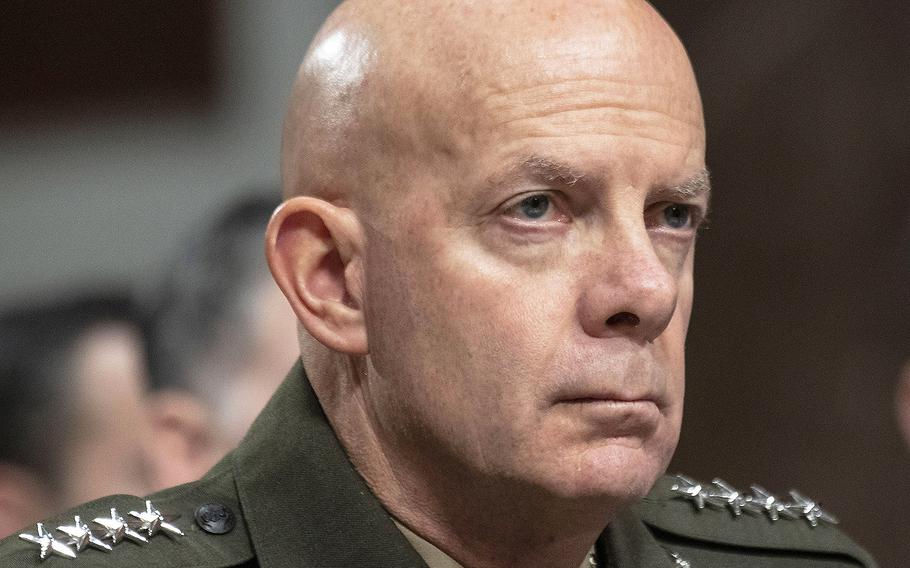 In a series of posts on Twitter last week, Commandant Gen. David Berger highlighted his “most important matters,” which also include barring officer and enlisted applicants with a prior conviction for gender-based violence and domestic violence.

It’s unclear why he chose to highlight the ban on applicants with gender-based or domestic violence convictions, which was the first of the measures he mentioned. His spokesman did not immediately respond to an inquiry seeking clarification.

The service already prohibits those convicted of sex-related crimes or domestic violence from serving, and such disqualifications can’t be waived, said Gunnery Sgt. Justin Kronenberg, a spokesman for Marine Corps Recruiting Command.

Berger’s tweets aimed at rectifying gender-related issues within the service, which has the smallest percentage of women in its ranks and has long faced criticism for its gender-segregated basic training and resistance to integrating women into combat roles.

Berger called for a review to determine the feasibility of women in the reserves returning to active duty in units and jobs that were previously gender-restricted.

The service’s leaders should also seek out active duty women in company-grade officer ranks to volunteer for the Infantry Officer Course and serve in infantry battalions, he said.

There are few women in infantry battalions, said Brown, a female Marine who was part of an integrated ground combat element from October 2014 to July 2015.

“A steady stream of additional women in the job fields will ensure prosperity for the future women and men entering the Marine Corps,” Brown said.

The commandant also ordered a study of the effects of extending the current 12 weeks of maternity leave to 12 months, which former Navy Secretary Ray Mabus told Military.com last week was a good way to recruit and retain more women.

Mabus, who had increased maternity leave for the sea services from six weeks to 18 in 2015, said that women were twice as likely to leave the Navy and Marine Corps at the 6- and 12-year marks, often to have families.

A full year off is a “great option for allowing military mothers to provide undivided attention to nurture their children during the most important developmental year of their lives,” said Sgt. Gloria Lepko, who serves with 2nd Marine Division.

Another change to parental leave policies Berger called for would extend the policy to cover adoptive parents, including same-sex couples.

Two other of Berger’s ideas focused on intellectual requirements. They would raise the general intelligence standard for entry into the infantry and incorporate academic standing into fitness reports for sergeants and above attending military education courses.

If it won’t hurt the Corps’ recruiting efforts “irreparably,” Berger said, he wants to raise the minimum general technical score for would-be grunts to 100.

But Cpl. Christopher Rea, a rifleman with II MEF, scored a 99 and said he thinks he’s able to “do the job just fine.”

“It takes time to grow into the job and get the knowledge [for it],” Rea said.