Women in high places at Aviano 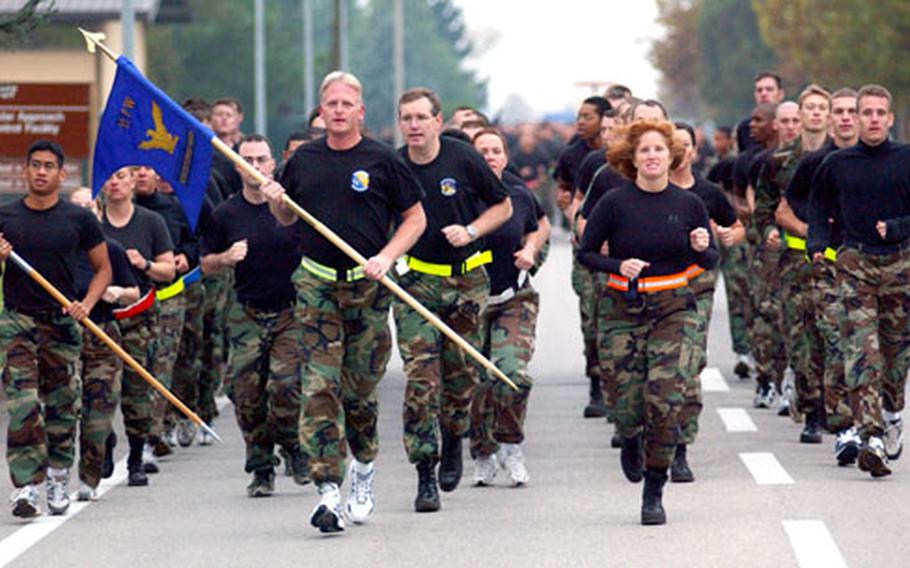 AVIANO AIR BASE, Italy &#8211; When the commander of the 31st Fighter Wing calls his senior leaders together, he can&#8217;t be accused of convening a meeting of the old boys club.

In fact, it&#8217;s likely there are more women in senior leadership positions at Aviano today than there ever have been. In addition to the five women mentioned above, three more command squadrons. And Yates&#8217; director of staff is also female.

Col. Kimberly Toney, commander of the 31st Mission Support Group, said there are women in various leadership positions at other U.S. Air Forces in Europe bases. But there might not be so many together in one place.

The women interviewed for this story appear to be of two minds: proud that so many of their female peers have achieved success, yet concerned that the subject is still a legitimate one for an article.

&#8220;I would hope we would get to the point where it wasn&#8217;t very newsworthy and not a big deal,&#8221; said Maj. Laurie Conrad, commander of the 31st Maintenance Operations Squadron.

Yet Yates won&#8217;t be replaced by a woman as wing commander. All nine commanders at Aviano since the wing activated have been fighter pilots. And that&#8217;s an area where women are still underrepresented in the Air Force.

Most female fighter pilots are company-grade officers. Only six are majors. Three are lieutenant colonels.

One of those, Lt. Col. Martha McSally, has been recently selected for promotion to colonel. So she would be at least another assignment away from commanding a fighter wing.

Yates said the situation has to be put into context, though. He was a member of the Air Force Academy&#8217;s graduating class of 1981. That was only the second year that saw females graduate from the academy. And people aren&#8217;t promoted overnight.

All of the women interviewed said they feel they get the respect they deserve from their peers and subordinates. Toney said airmen don&#8217;t bat an eye when she&#8217;s introduced at functions.

But that&#8217;s not always the case when she ventures out the gates for Italian gatherings.

That&#8217;s also the case with the local residents when she goes downrange.

But not too long ago, the culture wasn&#8217;t that much different in the American military.

Lane remembers a meeting with a chief master sergeant early in her career.

While acknowledging they serve as role models for future female leaders, Toney and the others said they don&#8217;t spend more time mentoring female subordinates than male ones.

And they don&#8217;t spend a lot of time networking with one another.

Lane said despite having advanced through a system once dominated by men, she hasn&#8217;t changed who she is. Or what she is.