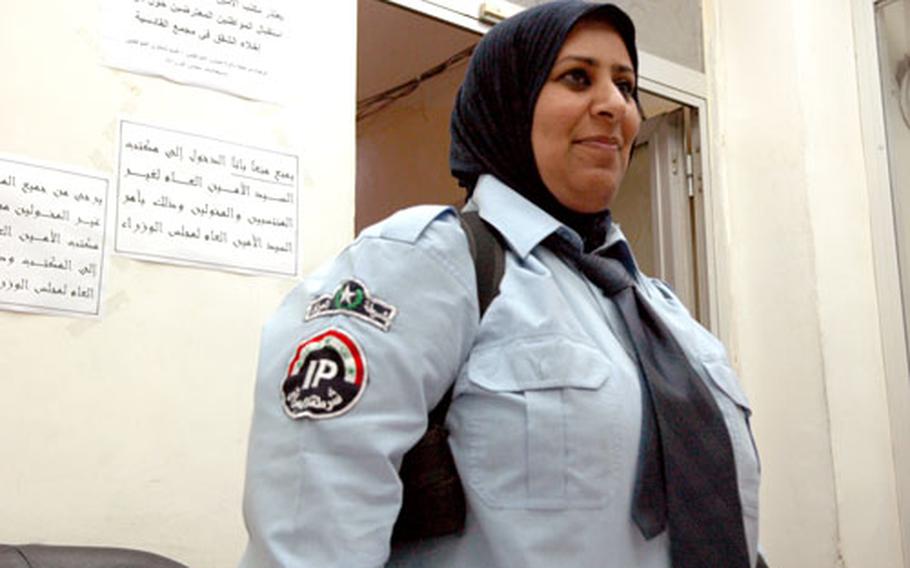 Women government workers, such as this police woman in Baghdad, are under-represented in the new Iraq ecomony, says Al-Shakly. (Anita Powell / S&S)

BAGHDAD &#8212; Even as Iraq moves towards democracy, rights and personal liberties have become demonstrably less accessible to a large portion of the population.

Women have suffered significant setbacks since 2003, said State Minister of Woman&#8217;s Affairs Azhar Al-Shakly. In recent years, she said, women have lost access to medical and educational services, workplace rights and fair hiring practices, and much of their former status in Iraqi society.

&#8220;We have the majority of people (for whom) the mentality is that she is less than a man and she has to be behind him,&#8221; she said through a translator. &#8220;The country is moving towards religious fundamentalism.&#8221;

Her ministry &#8212; which, by virtue of being a state ministry, and not one of the 30-plus national ministries, does not receive its own funding &#8212; works with national ministries to start programs, most health and education-related, to help increase women&#8217;s place in Iraqi society.

Al-Shakly, who said she wants Iraqi women to have choices and opportunities in their education, employment and home life, sounds reminiscent of leaders in the American women&#8217;s liberation movement of the 1960s. However, her goals are actually reminiscent of old Iraq: the rights she&#8217;s fighting for were available to Iraqi women in decades past, she says.

Those thoughts were echoed by Azza Humadi, a recently repatriated Iraqi who serves as women&#8217;s issues coordinator for the Project and Contracting Office, an arm of the U.S. Army.

But Al-Shakly said it will be an uphill battle: new social pressures in Iraq have made the nation less open to gender equality

She said she sees numerous examples of women&#8217;s diminishing status in Iraqi society, such as rules forcing women in government jobs and at universities to wear head coverings, decreased educational opportunities for girls, ministries&#8217; unwillingness to hire women over men and &#8212; perhaps most worryingly &#8212; no legal protection against abuse of women.

Surprisingly, she said, many of the voices speaking against women&#8217;s empowerment have come from other women, a telling sign of the nation&#8217;s push towards religious fundamentalism.

&#8220;I met several women from religious backgrounds. They said they don&#8217;t support having shelters because it encourages women to go against their families,&#8221; she said.

Though there may be little support from within the Iraqi government, several U.S. organizations conduct projects to help women. Those include the U.S. Army Corps of Engineers&#8217; work on maternity and children&#8217;s hospitals, clinics and new schools; humanitarian projects by the U.S. Agency for International Development, an arm of the State Department; contributions and assistance from internationally known non-government organizations, such as UNICEF; and a slew of small projects intended to extend job opportunities to Iraqi women.

One such program, called Women&#8217;s Initiatives, has an unlikely home: within the Project and Contracting Office&#8217;s water sector. The $700,000 program, originally intended to give opportunities to women contractors seeking water infrastructure contracts, has blossomed into a job database for professional women, an educational resource for women seeking contracts and a network for professional Iraqi women.

Since the program was started in June, nearly 300 women have registered on a career database and nearly 20 professional seminars have been done. Still, Padberg said, the program&#8217;s ultimate goal has been only modestly achieved.

Padberg said she, too, has encountered resistance in an area many wouldn&#8217;t expect:

It&#8217;s perceptions like that, Al-Shakly said, that may prove to be the biggest battle for Iraqi women. But the future of Iraq&#8217;s women, she said, is integral to the nation&#8217;s success.