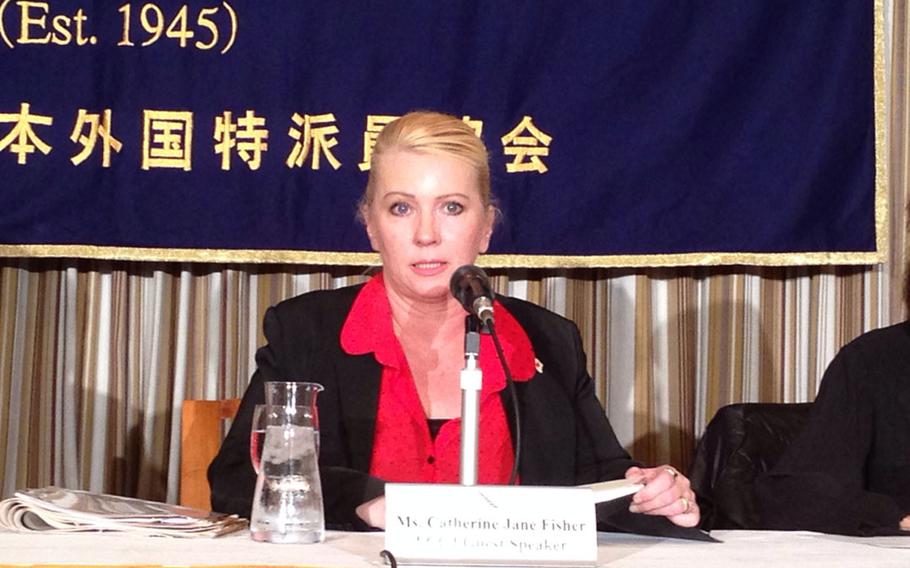 Buy Photo
Catherine Jane Fisher, who recently settled with a former U.S. sailor she accused of raping her in 2002, speaks to reporters in Tokyo during a November press conference. A Milwaukee circuit court upheld the validity of a Japanese civil court ruling in her favor. (Hana Kusumoto/Stars and Stripes)

TOKYO — An Australian woman who won a Japanese civil judgment against a former U.S. sailor she accused of rape in 2002 has settled the case in Milwaukee Circuit Court for $1, after spending more than a decade trying to get the Japanese ruling enforced.

Catherine Jane Fisher alleged that Bloke T. Deans raped her in a parking lot near Yokosuka Naval Base. After the criminal case was dropped by Japanese prosecutors, Deans was sent back to the United States and later discharged.

Deans claimed that the sex was consensual, according to past media accounts.

However, a Japanese civil court found Deans negligent, a ruling that required Deans to pay 3 million yen -- $29,000 at the current exchange rate – plus 5 percent interest per year until paid in full.

She told a news conference in Tokyo last month that Japanese law enforcement officials were unwilling to help enforce the ruling, or even locate Deans.

“The Japanese government could not even afford a postage stamp for me,” Fisher said.

Fisher learned of Deans’ whereabouts on her own, and found he had been arrested two years ago in Wisconsin. Deans was convicted of one count of misdemeanor child neglect, according to Milwaukee County court records.

Fisher filed suit asking Milwaukee County to enforce the Japanese ruling under common law comity — the principle that one jurisdiction recognizes the validity of another nation’s judicial system and rulings. The circuit court and Deans both accepted the argument on Oct. 15, according to documents recently obtained by Stars and Stripes from Milwaukee County.

Fisher said she was willing to settle for $1 in exchange for Deans’ acknowledgement of the civil court ruling.

“I sacrificed 12 years, because I want to put a stop to all the rapes and murders that are happening in [Japan],” Fisher said.

Had Fisher continued the legal battle in the United States, Deans might have been liable for the full amount awarded by the Japanese court, according to the settlement.

The settlement ends Fisher’s case fight against Deans, which she hailed as a victory.

But Fisher says the fight is not over.

Fisher says she will continue to seek damages from the Japanese government. She is demanding the salary of Japan’s foreign minister for 12 years, plus bonuses. That would come to at least $1.8 million, based on a Japanese Diet member’s $12,600 monthly salary.

“If they refuse to meet my demands … then I will take a class-action lawsuit,” Fisher said.

Benjamin Slane contributed to this report.