Woman testifies she was raped by major 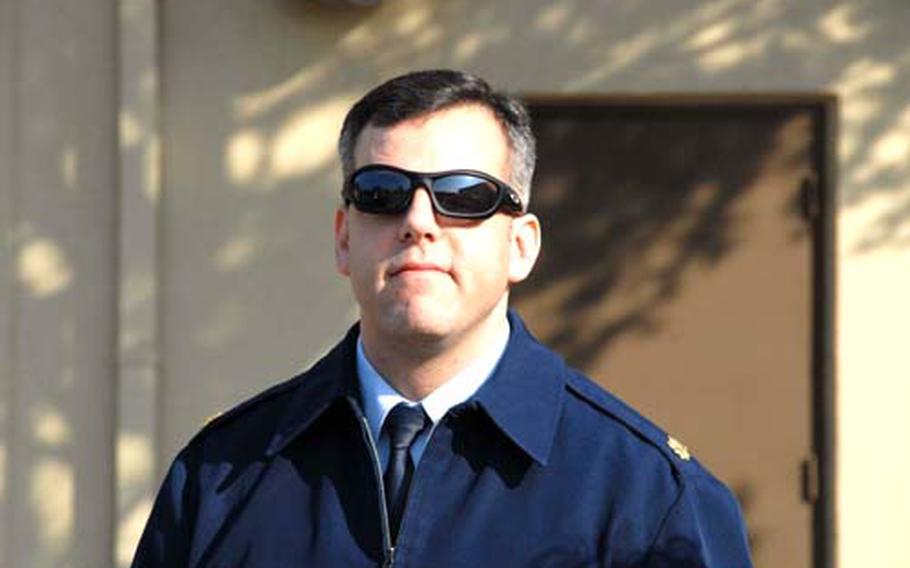 Maj. Mark Seldes pleaded not guilty to charges of rape, conduct unbecoming an officer and a gentleman, and adultery when the court-martial began Monday. (Ashley Rowland / S&S)

KUNSAN AIR BASE, South Korea &#8212; A former civilian employee at Kunsan testified Tuesday that a married doctor raped her while she was under the influence of sleep medication, but she hesitated to report it for days because she was afraid of losing her security clearance and privacy.

&#8220;I knew that if I made an official statement, that everybody would be in my business,&#8221; she testified Tuesday. &#8220;This is a small base and I knew everybody would find out. I knew this would be a matter of public record and I was afraid.&#8221;

Maj. Mark Seldes pleaded not guilty to charges of rape, conduct unbecoming an officer and a gentleman, and adultery when the court-martial began Monday.

The woman, whose name is being withheld to protect her identity, said she and Seldes started a relationship that included kissing and oral sex about a week before he allegedly raped her in her dorm on Nov. 4, 2006. That night, she said she invited him to watch television. She said she had two glasses of wine and half to three-quarters of a beer earlier that evening.

She changed into sweatpants and a T-shirt, told Seldes she was taking an Ambien and brushed her teeth, she testified. He told her his shoulder was hurting, and she said she sat down on her couch to rub it for him.

The next thing she said she remembered was waking up in her bed with him having sex with her. She quickly fell asleep again, she testified.

When she woke at 9 or 10 a.m., she said she was groggy and thought she had been dreaming.

She said she realized she had been raped when she saw a used condom, a condom wrapper and tissues in her trash can. She said she went back to sleep, got up and took a shower, went to the base exchange, watched television, and called family and friends.

The woman said she was upset and trying to decide what to do.

Seldes called her that Sunday, but the woman said she was angry and didn&#8217;t want to talk. She said he came to her dorm room 30 minutes later.

He began to yell, she said, and when she told him to stop he said he was yelling at himself and not her and began to cry.

She said she called Seldes on Nov. 10 while Special Agent Jeffrey Bise secretly listened to the conversation.

Bise testified Tuesday that Seldes admitted to having sex with the woman, and gave three versions of what happened that night.

She testified that Seldes learned she was taking Ambien when they first met and she asked him if the side affects were normal.

The woman testified she had turned down Seldes&#8217; request for sex three or four times that week but had blacked out one night after drinking. She said she woke up in Seldes&#8217; living room with her skirt and panties off, and a mutual friend asleep on his bed. Seldes told her she was staying at his place because she hadn&#8217;t been able to find her keys the night before, she said. She said Seldes told her that she came on to him, and he performed oral sex on her.

A forensic biologist testified that samples taken from the used condom showed DNA from both the woman and Seldes, possibly but not conclusively from his semen.

A toxicology expert testified that some people experience lingering grogginess and experience memory loss after taking Ambien, and that alcohol intensifies the effects of the drug.

A Kunsan pharmacist testified that Seldes prescribed Ambien 82 times between July 1 and Nov. 4, 2006.

After jurors had been dismissed for the day, attorneys questioned a forensic psychologist scheduled to testify later for the defense that the woman has histrionic personality disorder. Judge Col. Mark Allred ruled that the testimony is admissible &#8220;because the credibility of the victim is absolutely critical to this case.&#8221;