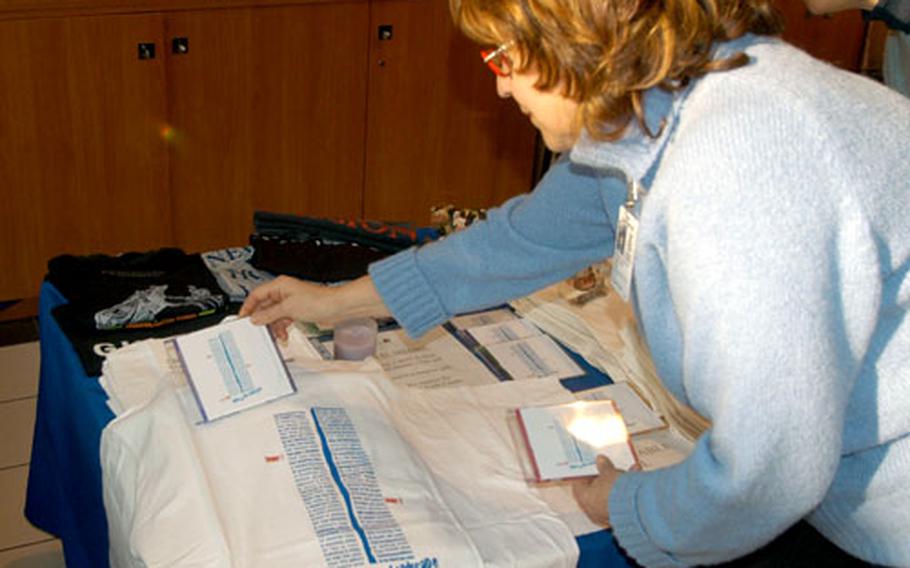 Myrna Goldstein adjusts one of the T-shirts, with her poem insipred by 9/11 attacks, that she and partner Gerardina Zeccola are currently selling at the exchange/commissary complex at Aviano Air Base, Italy. (Kent Harris / S&S)

That included an American free-lance journalist and entrepreneur living in Perugia, an Italian city a little more than an hour&#8217;s drive north of Rome.

Myrna Goldstein wrote down her thoughts in a poem shortly after the attacks. Then she put the paper away in a drawer. Gerardina Zeccola, her business partner, found it there and thought the words &#8212; and sentiment &#8212; deserved some attention.

So the two, with the help of a graphic artist friend, decided to put the poem on a T-shirt. The words, in blue ink, are arranged in the form of a pair of towers against a white background.

&#8220;Nothingness flew on jagged breezeCrashed into the steely treesSo tall they grazed the hem of GodWho was not fazed by the lightning rodsOf hate and murder &#8230;&#8221;

&#8220;Everyone wears T-shirts,&#8221; Zeccola said Tuesday while selling the shirts in the commissary/exchange complex at Aviano. &#8220;Everyone looks at T-shirts. To me, this message on the shirt says that we should never forget.&#8221;

Goldstein said some proceeds from the shirts, which sell for 38 euros each, would be sent to a foundation set up in New York City after the attacks.

She said she hopes to get the words written on a plaque.