Woman sees dedication in her protests at U.S. bases; authorities see a nuisance 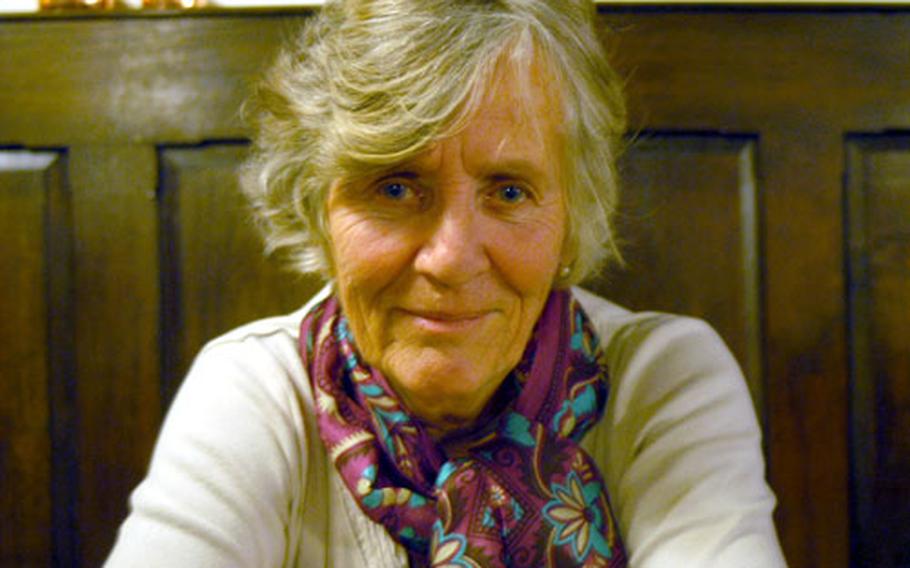 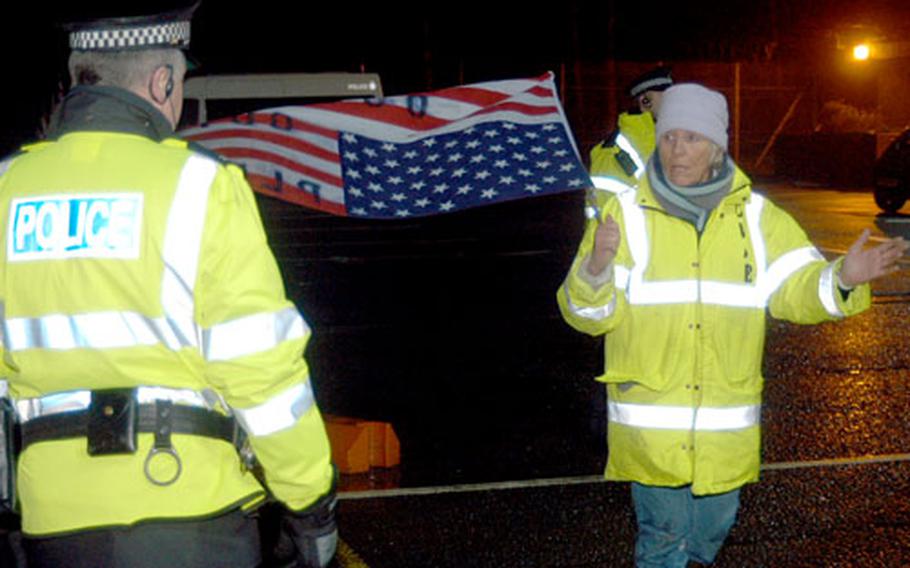 If there&#8217;s one thing Lindis Percy would like American servicemembers in England to know about her, it is simply that she is not crazy.

Dedicated activist, ardent protester, committed pacifist &#8212; those are labels she might accept.

But some at U.S. bases in the United Kingdom might dub her otherwise.

For those who aren&#8217;t familiar with Percy by name, they might recognize her by deed. Percy is the small-framed woman who frequently waves an upside-down American flag in front of bases all across England, from RAF Croughton to RAF Menwith Hill. She is the woman who was arrested an estimated 40 times in 2005 in front of, and occasionally inside, the gates of U.S. military installations.

She blocks traffic, crosses security lines and posts banners on base fences, and occasionally sneaks onto American bases to do what she calls &#8220;research.&#8221;

For Americans who have come across her, the figurehead of the Campaign for the Accountability of American Bases is likely seen as a gray-haired fanatic causing a scene at the gates.

In person, she is more soft-spoken and subdued, but no less passionate about her cause. Intense and committed to removing U.S. forces from English soil, yes, but not crazy.

For all of Percy&#8217;s visibility, however, she&#8217;s not a topic many U.S. or British officials like to talk about &#8212; in no small part because she is constantly in court against them. Another reason is a reluctance to bolster one of her main goals with CAAB &#8212; to generate publicity.

The Ministry of Defence police, the force that most often arrests Percy, would only issue a written statement that doesn&#8217;t specifically mention her.

&#8220;The Ministry of Defence police will always uphold the rights of people to carry out lawful demonstrations, but if officers observe a criminal offense has been committed or if anyone&#8217;s safety is at risk, then we will take action,&#8221; the statement said.

Base officials from Menwith Hill issued a similar statement.

&#8220;We support the right to peaceful protest,&#8221; said RAF Squadron Leader Ian Garnett, spokesman for the base. &#8220;As long as Ms. Percy, or any other protester, carries out their protest within the law we have no objection whatsoever.&#8221;

Why is she out there?

On a recent Tuesday night at RAF Menwith Hill, the weekly CAAB demonstration at the main gate is a lonely affair.

In a chilly drizzle in the North Yorkshire farmlands, Percy is the only one who showed up to protest the American presence, a demonstration CAAB has held nearly every Tuesday for the past five years, except in the month after Sept. 11, 2001. The protests usually draw anywhere from a few to 20 people.

With her protest flags wet and limp, Americans who pass her on their way out of the base might reasonably ask, &#8220;Why is she out there?&#8221;

The answer, Percy said, goes to the heart of the ultimate goal of CAAB, which is &#8220;to send the visiting forces back within their borders.&#8221;

The U.S. military has no right or need to be in England, she contends, and doesn&#8217;t have the entitlement to fence off portions of British soil.

It&#8217;s Percy&#8217;s habit of challenging the rules and laws governing the U.S. presence by breaking them that has made her a notorious figure at U.K. bases.

Her demonstrations at Menwith Hill are a good example of her philosophy and methods.

About four years ago, base officials decided to demarcate the post&#8217;s physical boundary at the main gate by painting a yellow line across the driveway a few yards back from the public road.

The base said the line is on MOD property, but Percy has challenged its position and the base&#8217;s right to even paint it on British pavement.

To make her challenge known, she deliberately performed her protest march a few feet over the line, consciously breaking the MOD&#8217;s orders not to cross it.

It&#8217;s a test that has been part of police officers&#8217; justification for repeatedly arresting her.

If she can, anyone can

As active as Percy has been in recent years with her cause, the roots of her protest work go back decades. A practicing Quaker whose father was a bishop, Percy first started demonstrating in the 1970s, when she learned about the location of nuclear missile sites on her native land.

Now 64, Percy has worked as a nurse and midwife, and now is a health counselor in the nearby town of Bradford.

But by her own admission, it&#8217;s a good thing for American bases that Percy doesn&#8217;t have violent tendencies, because the sprightly grandmother of six has for years been able to gain access to American bases with ease.

In spring 2003, sensing she had to do something powerful to protest the American invasion of Iraq, Percy climbed over a fence at RAF Fairford and walked up to a line of B-52 bombers using the base as a way station.

&#8220;I sat under a B-52 for two hours,&#8221; Percy said. She brought a flag and draped it over part of the plane, and looked inside the open doors of the undercarriage.

Eventually she was spotted walking on the runway and arrested, but the trespassing charge was later dropped before it went to court. In fact, Percy is arrested so often for the same offense &#8212; trespassing &#8212; that many charges against her are either dropped or combined.

RAF Fairford officials would not comment on the case.

In another example, in September 2005, Percy scaled a fence at RAF Croughton and walked around for four hours before voluntarily approaching security and alerting them to her presence. Croughton officials did not return requests for comments on the case.

Percy is hesitant to talk about such incursions, because she knows what they imply: If a grandmother can get onto the bases, anyone can.

The reason she frequently breaks the law, however, is she believes people authority must be constantly held accountable for imposing it, and a good way to do that is in court.

She would like people inside American bases in England to know, first and foremost, that what she does is not a personal attack against U.S. personnel.