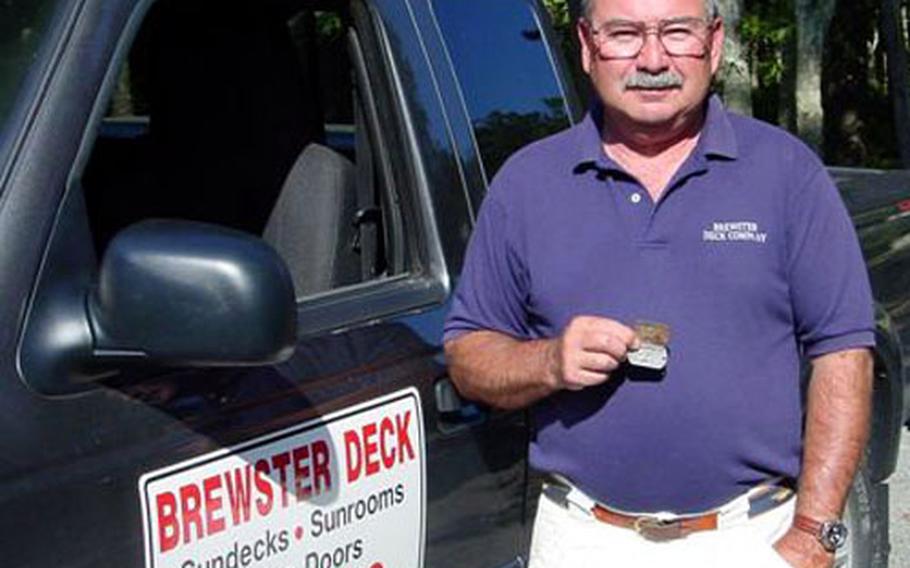 Vietnam veteran Ken Archambault holds a set of dog tags with his name and his identification number stamped on them that 35-year-old Stacey Hansen said she found while backpacking in Vietnam four years ago. A few years ago, Hansen called Archambault, telling him she’d found his tags. “I didn’t remember losing them,” he said. Real or not, Archambault said he wanted to have them. (Photo courtesy of Ken Archambault)

Someone was looking for the Ken Archambault who&#8217;d fought in Vietnam.

The caller found the right guy.

She had something of his.

More curious than stunned, Archambault called her back.

He doesn&#8217;t know if the tags really are those he wore during the war or if they&#8217;re one of the countless fakes circulating in Vietnam, said Archambault, 57, of Brewster, Mass.

Nor does he care, he said.

The caller&#8217;s voice on his machine was that of Stacey Hansen, who four years ago was backpacking through Vietnam when she ran across some American G.I. dog tags. She had seen a few for sale at markets and little shops and asked if there were more.

She was brought to a what she thinks was a Vietnamese military building, where inside a glass case, she was shown hundreds. She bought all 566 of them, for about $2 apiece.

&#8220;Why did I do this? I think Vietnam vets got a really bad deal in the way they were treated when coming home,&#8221; said the 35-year-old firefighter and paramedic in San Jose, Calif.

&#8220;Everyone knows it was a political war and politics are always going to surround war. But to me, it&#8217;s so sad that there was no support for them when they came home,&#8221; Hansen said.

She returns to Vietnam next week in search of more tags. Then she will catalog what she finds, post the names on her Internet site, www.vietnamdogtags.com, and seek out owners or their families.

It&#8217;s an endeavor that consumes an average of three or four hours a day as she and her boyfriend work to track down vets and family members who might want to see the return of the tags.

But more harm than good could be coming for efforts like Hansen&#8217;s, said Larry Greer, spokesman of the Pentagon&#8217;s POW/Missing Personnel Office.

&#8220;We get reports from families, and we meet with them frequently, that they&#8217;ve been contacted by well-meaning people seeking to return dog tags of loved ones. For some, for most, it brings back hurtful memories,&#8221; Greer said. &#8220;However, we have also had accounts of family members of servicemen, those missing in action or killed in action, and for some of those family members they&#8217;ve expressed appreciation.&#8221;

It was a surreal moment when Amanda Zucroff-Moore learned that her brother&#8217;s dog tags were being returned to the family, she said.

For years, there has been a cottage industry in Vietnam manufacturing G.I. dog tags, Greer said.

&#8220;They&#8217;re usually sold to American tourists with the pitch that &#8216;We found these, and perhaps you&#8217;d want to find their owners or their families back in the U.S.,&#8217;&#8221; he said. &#8220;These things are easy to duplicate, because when American forces pulled out in the 1970s, they often tossed dog tag stamping machines on the trash dumps. The blank metal was also tossed, or the enterprising Vietnamese craftsman could easily use metal of his own.&#8221;

Hansen maintains that the nearly 1,000 tags she has are authentic. Her collection has grown because a man read about her project in the media and gave her some 300 he had, and she picks some up here and there in her travels. None are duplicates, she said, and no one has disputed the authenticity of the 310 she has returned.

Of the 2.7 million men and women in the U.S. military who served in the designated war zone, 1,854 remain missing, Greer said. The Vietnam Veterans Memorial wall in Washington lists the names of 58,178 Veterans who died or who remain missing.

&#8220;To date, in the nearly 30 years we&#8217;ve been investigating these reports, no one dog tag brought back by any tourist has been useful in determining the fate of a missing American,&#8221; Greer said. &#8220;Most of those tags are not real. What we do know is real the pain this little exchange generates among the families.&#8221;

Vietnam veteran Ken Archambault holds a set of dog tags with his name and his identification number stamped on them that 35-year-old Stacey Hansen said she found while backpacking in Vietnam four years ago. A few years ago, Hansen called Archambault, telling him she&#8217;d found his tags. &#8220;I didn&#8217;t remember losing them,&#8221; he said. Real or not, Archambault said he wanted to have them.