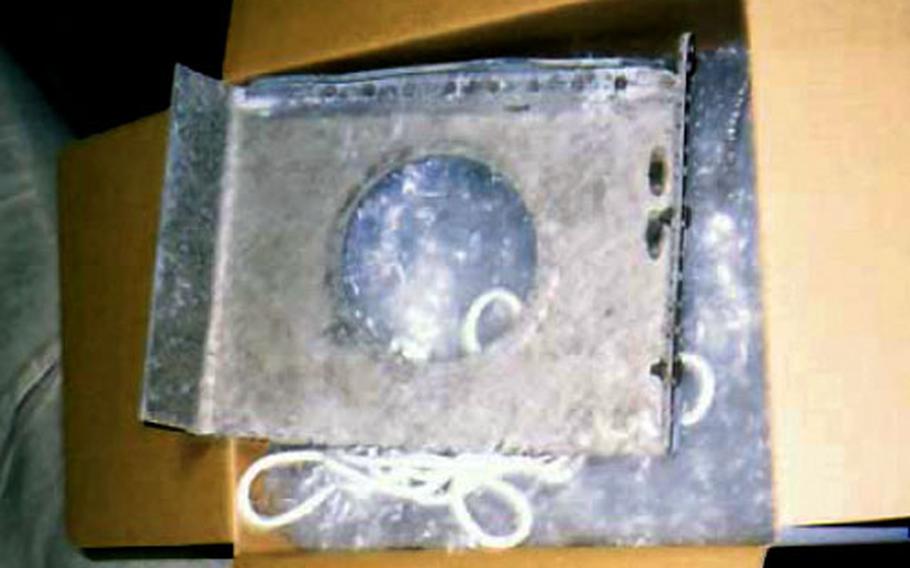 A fragment of a U.S. plane shot down during World War II is boxed up for shipment to Shirley Morehead, the niece of one of the crash survivors. (Courtesy of Shigeaki Mori)

A fragment of a U.S. plane shot down during World War II is boxed up for shipment to Shirley Morehead, the niece of one of the crash survivors. (Courtesy of Shigeaki Mori) 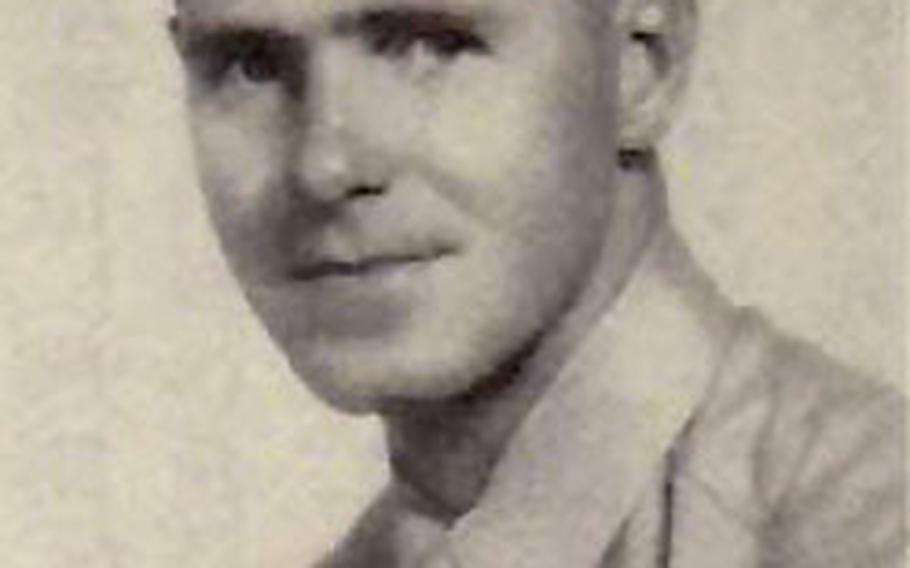 Staff Sgt. Charles Baumgartner was taken prisoner of war after his plane was shot down near Hiroshima, Japan, and died in the atomic bomb blast that devastated the city. (Courtesy of Shirley Morehead)

CAMP FOSTER, Okinawa &#8212; Shirley Morehead plans to place a piece of metal in an honored place in her Canton, Ohio, home as a memorial to an uncle she&#8217;s mourned for some 63 years.

It&#8217;s a chunk of duralumin, an aluminum alloy, with no visible clue to its original use.

But to Morehead it speaks of an older brother-figure who went to war and perished in the atomic blast that obliterated Hiroshima in 1945.

The piece of metal is part of the B-24 bomber "Taloa," which took off on a mission from the Yomitan Auxiliary Airfield on Okinawa on July 28, 1945, and was shot down near Hiroshima the same day.

They were being held as prisoners of war in Hiroshima when the United States dropped an atomic bomb on the city on Aug. 6, 1945.

"I remember the day we got the news he was dead," Morehead, 81, said in a telephone interview Friday.

"I had just come home from school and my grandmother was sitting there, crying with my aunt and a neighbor lady. It was awful. I never got over it."

Morehead&#8217;s own mother died when she was 11 and she moved in with her grandmother. Charles was 12 years older, and she looked up to him as a big brother.

"There&#8217;s always been something missing," she said. The family never received Baumgartner&#8217;s remains.

About three years ago she received a letter from Hiroshima historian Shigeaki Mori, 70, an A-bomb survivor, who said he came across pieces of the Taloa. Mori cut up the larger piece &#8212; part of the airframe &#8212; and plans to send pieces of it to relatives of the 11 crewmembers.

"Mr. Mori is such a wonderful man to do this," she said. "He told me it took him 11 years to find me and since then he&#8217;s sent me Christmas cards and letters and pictures of the memorial in Hiroshima where Charles&#8217; name is inscribed as an A-bomb victim."

Morehead said her uncle was 28 and unmarried when he died.

"He being killed like that did something to me. It never left and I am reminded by his sacrifice and get upset every time I hear about somebody from around here who was killed over there in Iraq," she said. "I just feel for their families so bad."