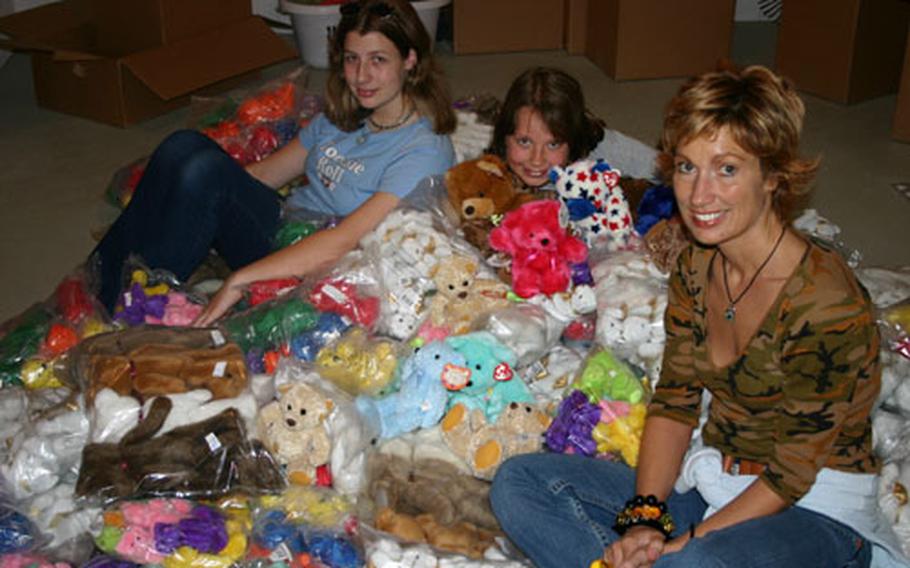 Sandra Hummel, far right, sits among some of the more than 1,600 stuffed bears she has collected for distribution to injured Iraqi children. With her are two daughters, Veneé, 14, left, and Darnelle, 10, who help her with the project. The bears come from donors in the United States and a collection box at the Café Rohr on Ledwards Barracks in Schweinfurt, Germany. (Courtesy of Kristen Chandler Toth)

On top of the time already spent with Red Cross and Girl Scouts, she started her own organization, Operation in FAITH, to gather donations of goods and funnel them to soldiers who need them. She visits military hospitals in Ramstein and W&#252;rzburg regularly.

Her volunteer hours already run as high as 80 each week, Hummel said, but she is driven to do more because, thankfully, fewer injured troops need help. So now her organization is gathering something new: stuffed bears for Iraqi children.

She calls the program Teddies for Toddlers.

About 1,600 plush bears, most the size of Beanie Babies, live in boxes in the basement of her Schweinfurt home.

Most were sent from the United States by Rita Taylor, the mother of a soldier in her husband&#8217;s unit, the 1st Infantry Division&#8217;s 1st Battalion, 77th Armor Regiment. Others came from two women in Florida whose husbands once served with hers.

The bears are awaiting for shipment to soldier contacts Hummel has made at bases in Iraq. Eventually they&#8217;ll be distributed at hospitals, orphanages and wherever there are kids who need them, she said.

She&#8217;s collecting more bears through a box at Ledward Barracks&#8217; Caf&#233; Rohr, whose owner also contributed pastries for her visits to hospitalized troops.

Hummel said she already has sent 400 bears to her husband, 1st Sgt. Alan Hummel, at FOB Danger in Tikrit. Sometimes he hands them out to kids when he goes on patrols.

Hummel is the daughter of an American soldier and a German mother. She was born in the W&#252;rzburg Army Hospital, where she now volunteers, and baptized in the chapel at Ledward Barracks, where she and her two daughters &#8212; Vene&#233;, 14, and Darnelle, 10 &#8212; now go to church.

Since starting up in April, Operation in FAITH has collected and distributed $16,000 worth of supplies for soldiers, Hummel said. Among the donations: a caseload of board games, a set of 40 coffee-table books, and a box of 200 energy bars sent anonymously and addressed to &#8220;An American Hero.&#8221;

Her mailbox has been so busy, Army postal authorities recently closed it down, accusing her of running an illegal business. She said her supporters, including the 1st ID&#8217;s rear detachment commander, Lt. Col. Christopher Kolenda, intervened and helped her get a box dedicated to Operation in FAITH.

Hummel is eager now to get the teddy bears into the hands of Iraqi toddlers.