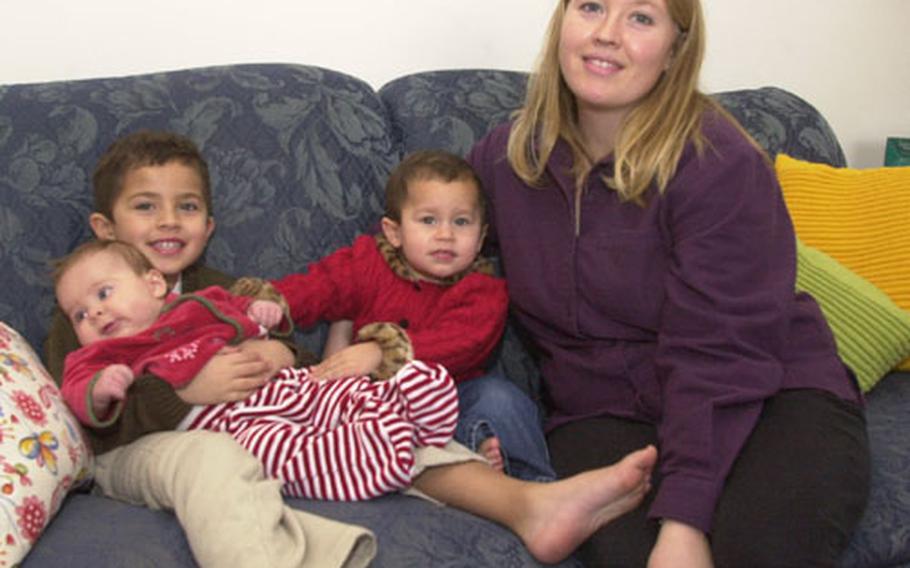 Stephanie Espinosa poses with her children, from left, Ian, 4, Gabriela, 3 months, and Maya, 2. While long periods of separation from her husband, Spec. Ricardo Espinosa, are tough, there are also perks to Army life, such as living in Europe and the family&#39;s vacation last summer to Majorca. (Terry Boyd / S&S)

Stephanie Espinosa poses with her children, from left, Ian, 4, Gabriela, 3 months, and Maya, 2. While long periods of separation from her husband, Spec. Ricardo Espinosa, are tough, there are also perks to Army life, such as living in Europe and the family&#39;s vacation last summer to Majorca. (Terry Boyd / S&S) 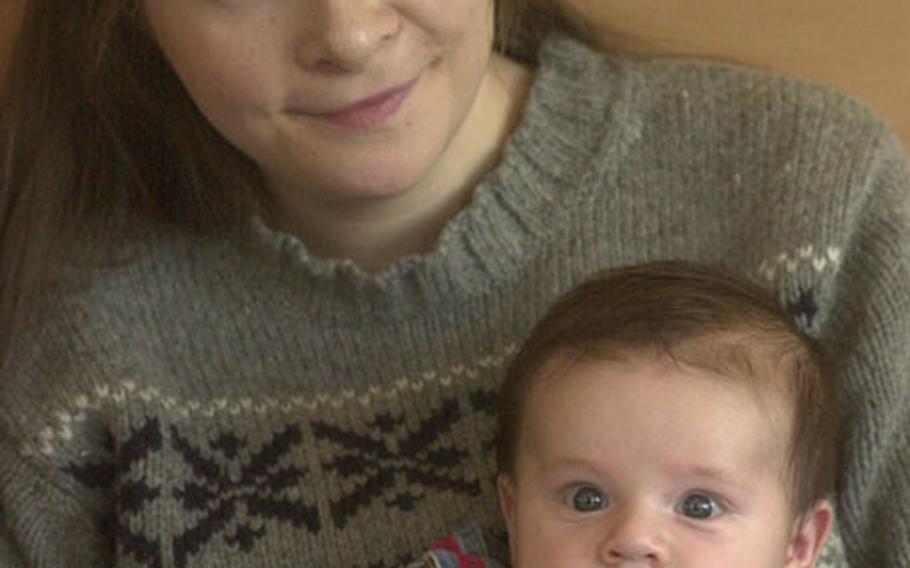 Emily Prucker poses with her 2-month-old son, Aiden. Being an Army wife is like being a single mother, Prucker said. (Terry Boyd / S&S)

And they would be, if it were not for one complication.

With Ricardo Espinosa, of Company A, 40th Engineer Combat Battalion, 1st Armored Division, deployed 2,500 miles away in Iraq since April, life has not been the fairy tale his wife imagined.

During the first months of the deployment, the couple was lucky to get occasional two-minute phone conversations. Then things got more difficult.

Stephanie Espinosa delivered their third child, Gabriela, on Sept. 13 without her husband. Though she seems to cope easily with the big things, sometimes the little things are trying. She gets her older two children &#8212; Maya, 2, and Ian, 4 &#8212; dressed, only to find the baby has a &#8220;blow-out diaper,&#8221; she said.

That&#8217;s not to say it has all been bad. The Espinosas vacationed in Mallorca last year, and Stephanie says she savors the little things about life in Europe, such as lunching with friends at a Greek restaurant in the middle of the week for no reason.

But she and other 40th Engineer spouses say no one can prepare a person for what Army life is like. In a volunteer Army, families volunteer, too. And they volunteer for a uniquely military experience with nothing similar on the civilian side short of being a single mother.

Just past the midpoint of the 1st AD&#8217;s yearlong Iraq deployment, Stars and Stripes interviewed several 40th Engineer families. Most of the 1st AD and attached units have been in Iraq for seven months, and soldiers are coming home &#8212; or will come home &#8212; to major changes.

Many on mid-deployment leave are meeting babies they had never seen. Many more will get to know their children again.

When Ricardo Espinosa deployed to Iraq in May, Stephanie Espinosa was 5&#189; months pregnant. Without her husband, she says, she knew she would need someone to watch her children while she was in the hospital, not to mention being with her in the delivery room.

So she had to make friends fast, meeting people in the commissary and on playgrounds, consciously networking with new friends. And when she was ready to deliver, she had a whole team to help her. April Smith and Rita Hatoum were with her in the delivery room, while neighbor Laura Dela Garza kept her children.

Life at forward-based divisions such as the 1st AD can be more intense than with some stateside units. During five years with the 101st Airborne Division at Fort Campbell, Ky., the longest Kimberly Foreman&#8217;s husband, Staff Sgt. Robert Foreman, 27, a combat engineer, was away was 30 days at the Advanced Noncommissioned Officers Course.

In three years at Baumholder, she figures her husband&#8217;s been home about nine months. In fact, when they arrived in February 2001, he deployed to Kosovo while the family was still in billeting.

Stephanie Espinosa figures her husband has been home a total of about 2&#189; months of the two years the family has been stationed in Baumholder. Like Robert Foreman, when Ricardo Espinosa wasn&#8217;t in Iraq, he was on the other side of Germany, training at Grafenw&#246;hr or Hohenfels.

Army wives must be there for one another or the lifestyle won&#8217;t work, Stephanie Espinosa said. &#8220;I don&#8217;t think Kimberly realizes how much she helped me figure out the logistics of three kids,&#8221; she says.

Outside this sorority, the media tends to key on those women who can&#8217;t adjust, says Emily Prucker. She&#8217;s sick of seeing what she calls &#8220;crying spouses on CNN.&#8221; Her experience is that most are getting through the deployment quite nicely.

Kimberly Foreman, who has a teaching degree, put her career on hold for her husband. Robert Foreman studied engineering, then joined the Army where he discovered combat engineering &#8212; basically blowing stuff up &#8212; was nothing like what he studied.

Yes, the long separations are tough, she says. Yes, they could probably be making more money as civilians. But that can wait.