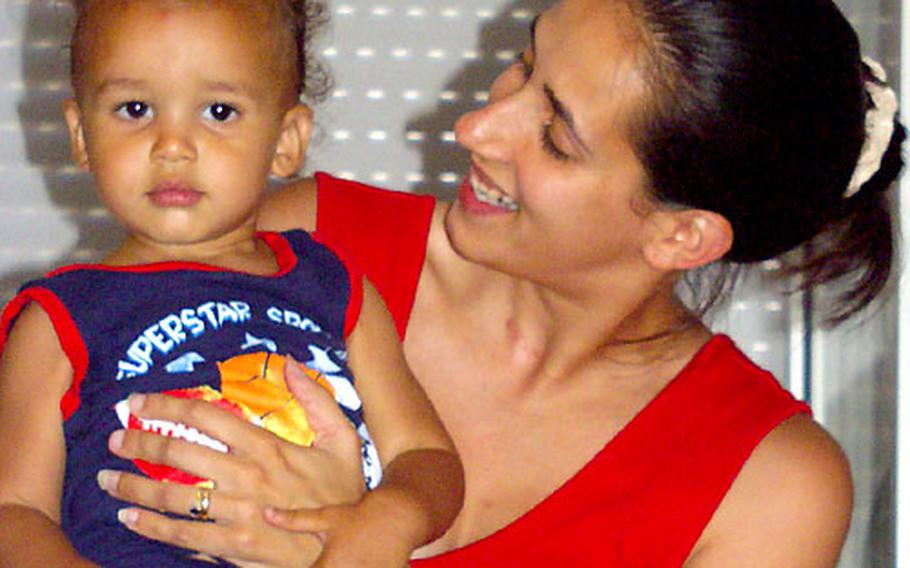 Malcolm Monteiro was only 6 months old when his father deployed to Kuwait in October, Megan Monteiro says. He will be almost 2 when Chief Warrant Officer 2 Christopher Monteiro is scheduled to return. (Steve Liewer / S&S)

The platoon of UH-60 Black Hawk pilots and crew chiefs from Giebelstadt joined an Apache attack squadron from nearby Illesheim as part of Task Force 2/6 Aviation.

Long after the rest of the newly formed unit won the war and came home, the &#8220;Ninja Squirrels&#8221; still are baking in the Iraqi desert. Dismayed to learn the soldiers&#8217; commanders planned to keep the platoon past one year &#8212; some as long as 16 months &#8212; in the interest of unit cohesion, their wives got busy writing letters and buttonholing generals.

Their lobbying has apparently paid off.

After two months of being told their husbands would spend a second winter in the Middle East, the wives found out Sunday that the unit has agreed to send the &#8220;Ninja Squirrels&#8221; home in October.

King said his command wasn&#8217;t aware of plans to keep the &#8220;Ninja Squirrels&#8221; downrange so long until he received a query from Stars and Stripes last week. The query followed USAREUR commander Gen. B.B. Bell&#8217;s Aug. 4 memo stating V Corps units and troops would not have to stay in the Middle East past one year.

From October through February, the &#8220;Ninja Squirrels&#8221; [a name they chose for themselves when they arrived in Kuwait] crisscrossed the theater hauling cargo, troops and VIPs.

They trained hard at flying in unpredictable desert conditions.

Then in early February, the rest of the 5/158th Aviation arrived from Germany. The &#8220;Ninja Squirrels&#8221; returned to the command of 12th Aviation Brigade, the 5/158th Aviation&#8217;s parent command from Giebelstadt, and received new orders extending them a full year, until February 2004.

The soldiers and their spouses endured a harrowing war that took a heavy toll on Army Black Hawks, including one nighttime training crash that killed a four-man crew from the 5/158th Aviation.

Baghdad fell just before the &#8220;Ninja Squirrels&#8221; hit the six-month mark. In June, the rest of the soldiers who deployed in October shipped their gear and returned to Germany under the Army&#8217;s unwritten &#8220;first-in, first-out&#8221; policy.

The wives say the unit&#8217;s commanders made it clear none of the soldiers will leave Iraq permanently until all of them can leave. Carroll says their husbands won&#8217;t complain out of respect for command.

On July 18, Carroll addressed a lengthy letter to Col. Raymond Palumbo, the 12th Brigade commander, and to Lt. Col. Eldon &#8220;Pete&#8221; Franks about the indefinite length of deployment.

Franks wrote back three days later. He told her the soldiers who deployed last October would receive a second two-week furlough in November but could promise no other relief.

The wives say they could live with the one-year deployments senior Defense Department officials say will now be normal. But they don&#8217;t believe it is fair their husbands should have to stay longer.

They say the long deployment already is taking a toll on their families.

On July 23, acting Army Chief of Staff Gen. John Keane announced a new rotation schedule for Army and Marine Corps divisions in the Middle East. He also made it clear that one year &#8212; and no longer &#8212; would be the standard Army rotation in Iraq for the next two years.

Bell followed that up Aug. 4 with his 10th &#8220;Bell Gram,&#8221; a newsletter he writes to USAREUR families. In it he pledged that V Corps soldiers currently in the Middle East would serve no more than one year.