Wives, kids weren’t only ones waiting in Wiesbaden 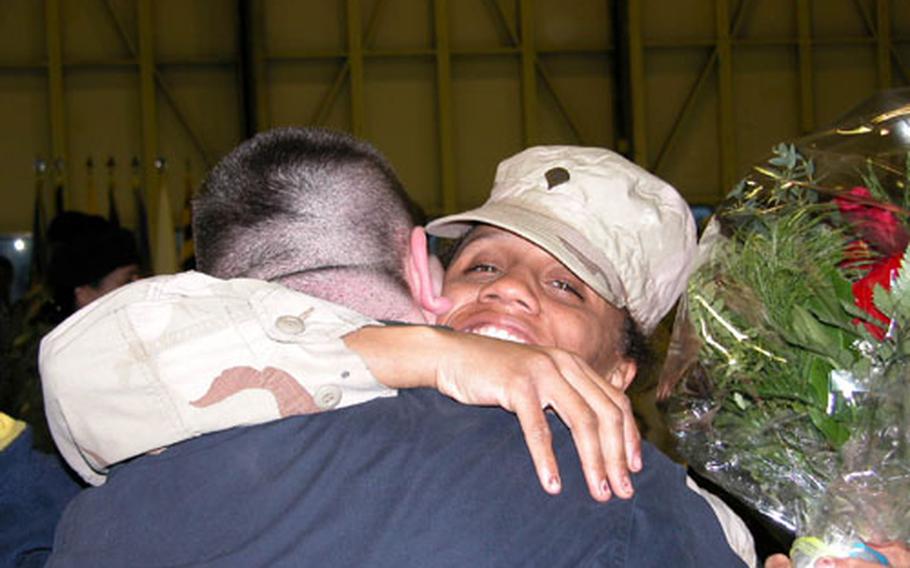 Spc. Roxsana Seale clutches her roses and gets a hug from her husband, David Seale, upon her return Wednesday to Wiesbaden Army Air Field. Seale, a member of the 19th Support Company, 3rd Corps Support Command, was serving at Balad Air Base, about 40 miles north of Baghdad, during Operation Iraqi Freedom. (Charlie Coon / S&S)

Spc. Roxsana Seale clutches her roses and gets a hug from her husband, David Seale, upon her return Wednesday to Wiesbaden Army Air Field. Seale, a member of the 19th Support Company, 3rd Corps Support Command, was serving at Balad Air Base, about 40 miles north of Baghdad, during Operation Iraqi Freedom. (Charlie Coon / S&S) 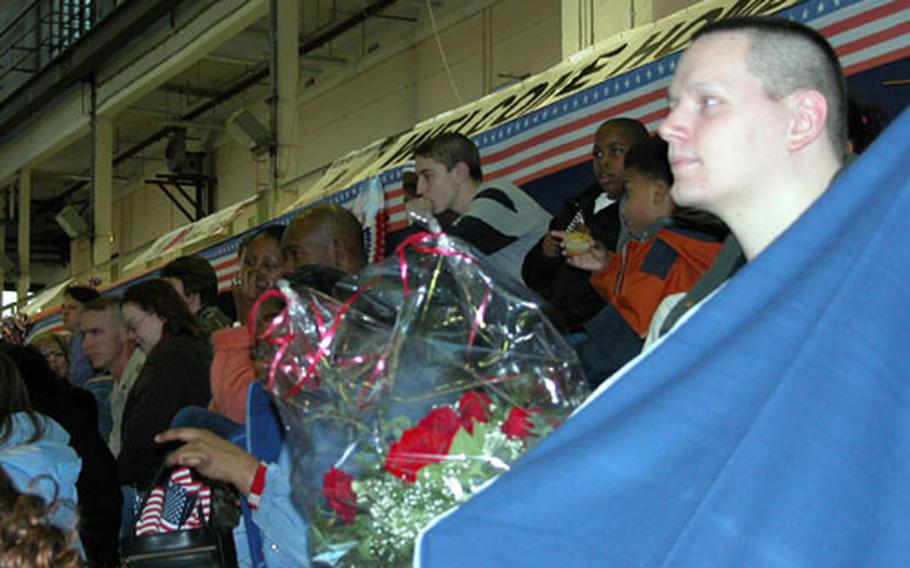 In war, wives and children aren&#8217;t the only ones left behind.

Seale is married to Spc. Roxsana Seale, who had been gone since April. But she and other members of the 3rd Corps Support Command, Headquarters Company, came back from Iraq on Wednesday. Some were met by their wives and kids inside the hangar at Wiesbaden Army Air Field.

Roxsana Seale was met by her husband.

People who leave to fight a war deserve to be met at the door when they return, said the people inside the hangar. Some were just friends, others were lovers.

Spcs. Jamilah James and Laquel Gaddy returned from Iraq a few weeks ago. They were waiting for their friends who&#8217;d been left behind.

James had a special friend she was waiting for. She met her boyfriend, Staff Sgt. Neil Chambers, while downrange. Soon it would feel like the gang&#8217;s all here.

The 3rd Corps Support Command, or COSCOM, wasn&#8217;t safe in Iraq. Of its 15,000 members, 15 were killed and more than 180 wounded. They were based at Balad Air Base, 40 miles north of Baghdad. Their duties included trucking water, fuel and supplies to whoever needed it to fight the war. About 130 members of Headquarters Company came home Wednesday.

Many were single, but they were not left to feel alone.

Volunteers from the 3rd COSCOM Family Readiness Group welcomed them off the bus with yellow roses. For the younger soldiers, their linens and pillows (with mints on them) were already prepared at the barracks. There were snacks in the fridge.

Fourth-graders from Hainerberg Elementary School made posters for their doors that said things like, &#8220;You&#8217;re our hero.&#8221;

There was a buzz when the two buses pulled up to the hangar. The soldiers in tan desert uniforms marched in and formed ranks. Those who were waiting looked from the bleachers for their loved one.

The national anthem was played. The commander made a speech over a fuzzy loudspeaker, telling everyone how proud they should be. Then, finally, the soldiers were allowed to break ranks. Everyone rushed together and hugged and kissed and cried.